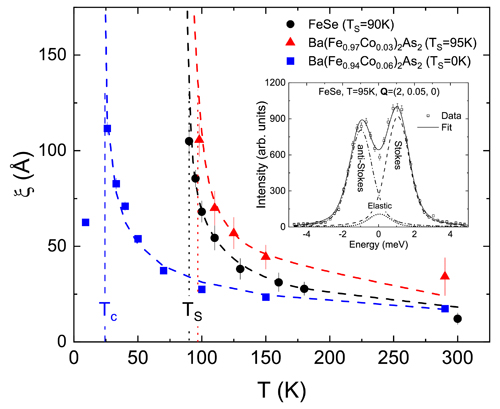 A growing body of evidence suggests an intimate connection between electronic nematic phases and high-temperature (high-Tc) superconductivity. Actually, nematicity (liquid crystal-like behavior in the form of large quantum fluctuations) is ubiquitous in the electronic phases of high-Tc superconductors, particularly in iron (Fe)-based systems. However, the extent to which there is a causal relationship between nematic fluctuations and superconductivity is currently unclear. Previous research [1] by the principal investigators of the present study showed that transverse acoustic phonons can serve as efficient probes of spatial nematic correlations. The research also went on to show that quantitative analysis of the softening that takes place as the temperature approaches that of the onset of the nematic phase (Ts) can lead to a determination of the nematic correlation length. The present study, based upon research carried out at the U.S. Department of Energy’s Advanced Photon Source (APS), and published in Physical Review Letters, extends that previous work.

In the present study, the principal investigators collaborated with scientists from Argonne National Laboratory and RIKEN SPring-8 Center (Japan) to employ high-brightness x-ray beam in order to broaden their investigation to include a comparison of the temperature dependence of the nematic correlation length ξ for three Fe-based compounds. They used high-resolution inelastic x-ray scattering to extract the temperature-dependent nematic correlation length ξ from the anomalous softening of acoustic phonon modes in FeSe, underdoped Ba(Fe0.97Co0.03)2As2 (UD Ba-122), and optimally doped Ba(Fe0.94Co0.06)2As2 (OP Ba-122). The data were gathered on the X-ray Science Division 30-ID-C x-ray beamline at the APS and the RIKEN BL43LXU beamline at SPring-8. (The APS is an Office of Science user facility at Argonne.)

The researchers found a striking similarity in the behavior of all three compounds, despite their rather different ground states. The values for the nematic correlation length ξ above the superconducting transition temperature Tc were analyzed with a power law fit for ξ versus T using ξ = ξ0(T − T0)−υ. The fit allowed the exponent υ to vary freely, yielding values of υ = 0.58 ± 0.06 for FeSe, υ = 0.40 ± 0.04 for UD Ba-122, and υ = 0.57 ± 0.07 for OP Ba-122, with no significant effect on the fit quality or values of T0. The values of υ were all close to ½ considering the experimental uncertainty. Thus, the researchers fixed υ at υ = ½. In this way, the researchers found that the T dependence of the nematic correlation length ξ in two different families of iron-based compounds and at different regimes (underdoped and optimally doped) was very well described by (T − T0)−1/2 (Fig. 1). In each case, T0 was found to be very close to the structural transition temperature Ts, which is the temperature at which nematic electronic self-organization prompts a lattice transition to an orthorhombic configuration. Combined with the previously reported Curie-Weiss behavior observed in the nematic susceptibility, the results point to mean-field behavior with fluctuations extending to high temperatures above Ts. The researchers attribute this mean-field behavior to electronic coupling to the lattice—more specifically, to the acoustic phonons.

The observations highlighted the key role played by nematoelastic coupling, which not only changed the character of the nematic transition, but also extended the impact of nematic fluctuations to rather high temperatures above Ts. Such a coupling has been proposed to be detrimental to the enhancement of Tc by quantum critical nematic fluctuations. Whether this explains the observed behavior of Tc across the phase diagram of chemically substituted FeSe1−xSx, which shows no sizable enhancement upon crossing the nematic quantum critical point, is an interesting topic for future investigation. Moreover, the similarity in nematic correlation length that was observed in FeSe and Ba-122 raises important questions about the interplay between nematicity and magnetism. Although FeSe displays no long-range magnetic order, a strong fluctuating magnetic moment, comparable to that of Ba-122, has been observed experimentally. Whether this is enough to explain the similar behavior of ξ in both compounds is an issue that deserves further study.  ― Vic Comello