A Comparison of Large and Supersized Rhyolitic Eruptions in Taupo, New Zealand 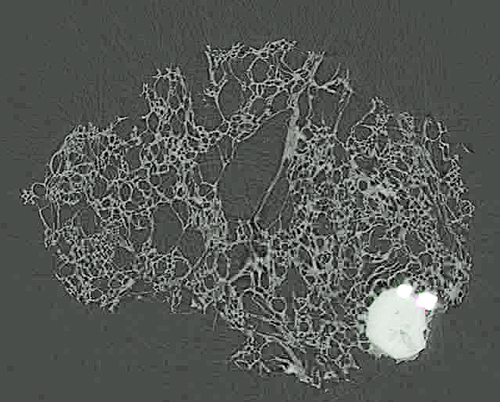 Researchers used the U.S. Department of Energy’s Advanced Photon Source (APS) to investigate one large and one supersized eruption of high-silica rhyolite magma in the Taupo Volcanic Center (TVC), New Zealand. The compositions and textures of the rock samples reveal differences in the magmatic processes that formed them. To understand volcanic hazards, and also the formation and evolution of the continental crust, it is necessary to know where and for how long these magmas reside in the crust, plus the timing and path over which they erupted.

For the past 1.6 million years, the sideways and downward movement of the Pacific Plate beneath the North Island of New Zealand has fueled explosive volcanic activity. In the middle is the TVC, where large, explosive, caldera-forming silicic volcanism has occurred intermittently for about 61,000 years. The volcanism was “hyperactive” for about 24,000 years, from the Oruanui supereruption 25,400 years ago to the Taupo eruption 1,720 years ago.

Supereruptions are rare in Earth history, and the Oruanui was the most recent. This voluminous high-silica rhyolitic event ejected 530 km3 (approximately 127 cubic miles) of material. The second largest eruption in the TVC, the Taupo eruption, produced an order of magnitude smaller volume (35 km3, or about 8 cubic miles).  Many smaller eruptions, primarily of dacite and lower silica rhyolite, occurred in between the two large eruptions.

Igneous rocks, and the minerals in them, lock away the secrets of their magmatic history in their compositions and textures (sizes, shapes). Volcanic rocks, like the pumice the researchers used in this study, contain different kinds of crystals and glass. Phenocrysts are larger crystals whose sizes and compositions help to record the history of crystallization in the magma prior to eruption. Microlites are tiny crystals that grow just before or during an eruption and reveal secrets about eruptive processes. For this study, the researchers analyzed crystal and glass compositions and textures to learn about the crustal storage conditions, longevity, and eruption of the TVC magmas.

Using rhyolite-MELTS geobarometry on glass compositions, the researchers in this study found that both magmas crystallized in the upper crust but at different pressures, consistent with differences in their compositions. The Oruanui magma was more evolved than the Taupo magma and crystallized at lower pressures (50-250 megapascal [MPa] versus 280-470 MPa). Previous studies showed that the Oruanui and Taupo magmas did not exist in the crust simultaneously, and that the TVC magmatic system was rebuilt after the Oruanui explosion. The researchers found a trend from shallow storage of an older, mature system (Oruanui) to deep storage of a younger, less mature system (Taupo) as the magmatic structure was being reconstructed. This is similar to a trend seen during a 100,000-year ignimbrite flare-up, when several supereruptions occurred. This led the researchers to suggest that the modern TVC may currently be flaring-up for another sequence of large-to-giant eruptions.

Using crystal size distributions, which they determined from tomographic images (Fig. 1) collected at the GeoSoilEnviroCARS 13-BM-D x-ray beamline at the APS, and titanium-in-quartz diffusion chronometry, the researchers found that the two magmas crystallized over similarly short time periods (decades to centuries) even though the volume of the two eruptions was so different. This suggests that longer residence times are not necessarily correlated with larger eruptions, and that large-to-giant volumes of crystal-poor silicic magma are unstable in the upper crust. (The APS in an Office of Science user facility at Argonne National Laboratory.)

The researchers also noticed important textural differences in the tomographic images from the two eruptions. Rock textures reveal important characteristics about the conditions and processes of eruption. Microlites are scarcer in Oruanui rocks than in Taupo rocks, and the researchers believe that the difference they see in microlite textures is related to the differences in the magma storage depths. The shallower storage depth of the Oruanui magma could have resulted in shorter ascent times, less chance of the magma stalling, and/or lower liquidus temperatures.  ― Dana Desonie

Funding was provided by a National Science Foundation (NSF) EAPSI Fellowship to A. Pamukcu, a Vanderbilt University VUSRP to K. Wright, and NSF grant EAR-1151337 to G. Gualda. GeoSoilEnviroCARS is supported by the NSF—Earth Sciences (EAR-1128799, EAPSI-1209584) and U.S. Department of Energy (DOE) GeoSciences (DE-FG02-94ER14466). This research used resources of the Advanced Photon Source, a U.S. DOE Office of Science User Facility operated for the DOE Office of Science by Argonne National Laboratory under Contract No. DE-AC02-06CH11357.