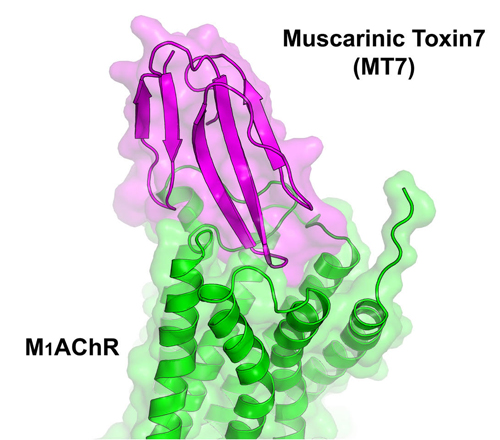 Venomous animals are prevalent in wildlife, from small ants, marine snails, and snakes to giant lizards. As these creatures evolve to increase their ability to capture prey and defend themselves from predators, their venom is a natural arsenal of protein-modifying agents. One of the toxin groups produced by mamba snakes in their venom is the muscarinic toxin (MT) family, which has binding affinity for a family of proteins referred to as muscarinic acetylcholine receptors (MAChRs). These receptors play important roles in the nervous system and help regulate many key central and peripheral functions. In fact, muscarinic antagonists are known to cause memory disturbances in animals and humans. The specific receptor subtype that MT7 preferentially binds to is called M1AChR. In a Science paper, an international team of researchers presented a crystal structure of MT7 in a complex with M1AChR. The researchers collected structural x-ray data at the U.S. Department of Energy’s Advanced Photon Source (APS) that revealed important mechanistic insights. In addition to uncovering why MT7 has such a high specificity for M1AChR, the team demonstrated that MT7 could be modified to be selective for a different muscarinic acetylcholine receptor subtype. This latter finding is especially exciting as it suggests that muscarinic toxins can be customized to create potent drugs capable of targeting other kinds of receptors. Thus, the authors have created the possibility of exploiting snake venom to improve patient health.

Mamba snakes (of the genus Dendroaspis, which literally means “tree asp”) are highly venomous animals native to a variety of regions in sub-Saharan Africa. The black mamba, in particular, is especially dangerous and has claimed many human lives. Mambas are either arboreal (tree-dwelling) or terrestrial (land-dwelling) and hunt a plethora of different animals, including birds and small mammals. The small MT toxins isolated from the venom of these snakes are so named because they bind to the MAChR family of protein receptors. Located in cellular membranes, these receptors mediate important cellular actions such as neuronal firing and smooth muscle contraction in response to binding of the neurotransmitter acetylcholine. There are five different subtypes of MAChRs. Out of these five subtypes, the toxin MT7 has an extremely high specificity towards the M1AChR subtype. The binding of MT7 to M1AChR alters the functionality of this receptor as well as its ability to bind to downstream signaling molecules. In addition to its connection to the snake toxin MT7, M1AChR has been reported to have an association with the devastating age-related neurodegenerative disorder Alzheimer’s disease. Thus, both MT7 and M1AChR have tangible connections to human health.

The high-resolution crystal structure of MT7 complexed with M1AChR was obtained at the National Institute of General Medical Sciences and National Cancer Institute (GM/CA-XSD) structural biology facility x-ray beamline 23-ID-D of at the APS (the APS is an Office of Science user facility at Argonne National Laboratory). Figure 1 displays the crystal structure of MT7 from the green mamba snake in complex with muscarinic acetylcholine receptor 1. As seen in this illustration, MT7 engages into the extracellular pocket of M1AChR. An analysis of the structure revealed how MT7 influences the function of M1AChR and also identified why, on a molecular level, M1AChR has such a high affinity for MT7. The team also demonstrated that MT7 could be modified to exhibit selectivity towards the M2AChR subtype.

Not only do these data help us better understand the molecular mechanisms by which mamba snake venom induces deleterious effects, but the authors have found a way to customize the snake toxin MT7 to selectively target another important receptor. This has massive implications for drug discovery, and it suggests that further customizations could allow for the creation of potent drugs targeting other receptor proteins.  ― Alicia Surrao

We thank staff at the GM/CA-XSD beamlines for technical assistance and support for data collection. The work was supported by National Institutes of Health (NIH) grant R01GM083118 for R.K.S. B.K.K. was funded by R01NS028471. K.C.G. was funded by NIH R01AI125320, the Mathers Foundation, and the Howard Hughes Medical Institute. A.I. was funded by the PRIME 18gm5910013 and the LEAP 18gm0010004 from the Japan Agency for Medical Research and Development (AMED) and the Japan Society for the Promotion of Science (JSPS) KAKENHI 17K08264. J.A. was funded by the LEAP 18gm0010004 from AMED. B.K.K. is Chan Zuckerberg Biohub investigator. GM/CA-XSD is funded in whole or in part with Federal funds from the National Cancer Institute (ACB-12002) and the National Institute of General Medical Sciences (AGM-12006). This research used resources of the Advanced Photon Source, a U.S. Department of Energy (DOE) Office of Science User Facility operated for the DOE Office of Science by Argonne National Laboratory under Contract No. DE-AC02-06CH11357.