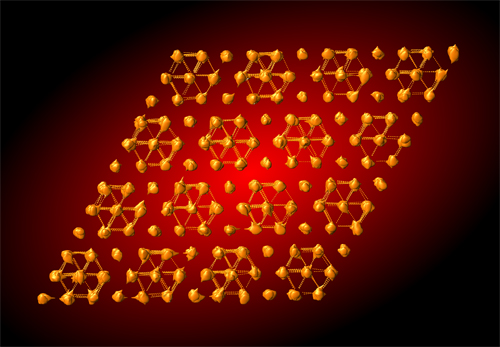 The 2H (H: hexagonal) polytype of tantalum diselenide (2H-TaSe2) is an important material, not only because it is an archetypical charge density wave (CDW) system, but also because it may enable future superconducting, optoelectronic, and ultrafast electronic devices. As with any system exhibiting CDWs (an ordered quantum fluid of electrons in a linear chain compound or layered crystal that form a standing wave pattern and can carry an electric current) periodic crystal lattice distortions (PLDs) form as conduction electrons spontaneously configure themselves into standing CDWs. Although the lattice distortions have received much study at temperatures below the CDW/PLD critical ordering temperature (TCDW), little was known about possible precursor clustering of Ta atoms at higher temperatures that may lead to the PLDs as temperatures drop toward TCDW, until researchers using the U.S. Department of Energy’s Advanced Photon Source (APS) at Argonne National Laboratory took a detailed look at high-temperature Ta behavior.

2H-TaSe2 consists of stacked Ta-Se layers, each comprising  a Ta atomic plane sandwiched between two hexagonal Se atomic planes. In the CDW/PLD state of 2H-TaSe2, Ta atoms become displaced from their positions in the undistorted hexagonal lattice, forming a repetitive pattern of small planar clusters. The researchers from Central Michigan University and Argonne studied how these displacements multiplied and grew with decreasing temperature using both conventional and resonant high-energy x-ray diffraction (XRD) as a basis for atomic pair distribution function (PDF) analysis and reverse Monte Carlo (RMC) simulations over the temperatures 400 K to 100 K, concentrating on fine details of the local arrangements of Ta atoms throughout this temperature range.

Analysis of the total atomic PDFs derived from the high-energy XRD patterns showed that unusually short Ta-Ta or Se-Se distances already emerged in 2H-TaSe2 near room temperature. To better study these distances, the researchers conducted a resonant high-energy XRD experiment at the K edge of Ta, this time at the XSD 1-ID-C beamline of the APS, an Office of Science user facility at Argonne. The resulting Ta-differential atomic PDFs doubled the experimental sensitivity to Ta positions, revealing that upon cooling below room temperature, some nearby Ta atoms in 2H-TaSe2 came closer together than their average separation distances in the undistorted crystal structure. To provide a detailed understanding of the character of the apparent clustering of Ta atoms, the researchers built large-scale three-dimensional (3-D) structure models, and refined them against the total and Ta-differential PDFs using reverse Monte Carlo simulations.

The experimental atomic PDF analysis and 3-D structure modeling allowed the researchers to uncover fine details of the genesis of the PLDs in the CDW state of 2H-TaSe2. They found that Ta atoms underwent significant in-plane displacements that brought about unusually short Ta-Ta distances already near room temperature. The amplitude and direction of the displacements above TCDW were close to those of the static distortions of Ta planes observed below TCDW. The difference was that the latter formed a 3-D periodic pattern, whereas the former were correlated only over short-range distances, with the correlation length gradually increasing with decreasing temperature. The correlations remained local with decreasing temperature, leading to the formation of small-size Ta clusters at about 200 K. The clusters became distinct and clearly separated from each other at about 150 K. Finally, at 100 K, i.e., below the TCDW, the clusters were arranged in a periodic superstructure (Fig. 1). Because the bonding distances between atoms in the clusters remained somewhat different, the clusters were not completely aligned with each other, leading to the incommensurability of the emerged first CDW/PLD phase. Upon further cooling, the clusters became nearly perfectly aligned, enabling them to lock into a commensurate superstructure to minimize the elastic energy, leading to the commensurate second CDW/PLD phase. Thus, the transition between the normal and CDW/PLD state of 2H-TaSe2 appeared gradual with locally correlated displacements of Ta atoms above TCDW serving as precursors of the PLDs below TCDW.

This result may well explain the emergence of a “precursor” CDW pseudogap in the normal state of 2H-TaSe2 near room temperature and its smooth evolution into a band gap below TCDW. Specifically, the pseudogap may be due to the locally correlated Ta displacements, and the band gap may be understood as being a consequence of the complete alignment of these displacements into a periodic superstructure.   ― Vic Comello

Thanks are due to O. Shovon for the help with the synchrotron XRD experiment. This work was supported by the U.S. Department of Energy (DOE) Ofﬁce of Science-Basic Energy Sciences under Award No. DE-SC0006877 and used resources of the Advanced Photon Source, a U.S. DOE Office of Science User Facility operated for the DOE Office of Science by Argonne National Laboratory under Contract No. DE-AC02-06CH11357.