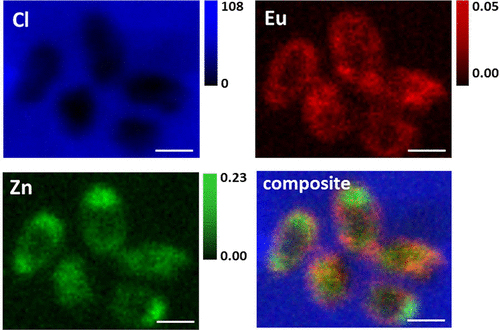 For centuries, microscopy has been an invaluable tool for understanding nature. Fluorescence microscopy in particular can image a diverse array of molecules. For example, a molecule can be conjugated to a special protein that emits green light. Such conjugation allows researchers to identify a molecule in a cell or tissue by finding regions that fluoresce green. While this technique is incredibly powerful, it is challenging to obtain an optical resolution better than 200 nanometers. In recent work carried out at two U.S. Department of Energy (DOE) x-ray light sources, including the Advanced Photon Source (APS), a novel tool was developed to obtain impressive spatial resolutions (e.g., 36 nanometers) in intact cells. This was accomplished by adapting lanthanide-binding tags in conjunction with x-ray fluorescence microscopy. Since lanthanide-binding tags offer many unique advantages, this novel work may allow for previously inaccessible structures and molecules to be imaged at a high resolution.

The metallic chemical elements (rare-earth elements) with atomic numbers (proton numbers) 57-71 make up the lanthanide series. Other techniques have previously used lanthanide binding tags for important research techniques such as nuclear magnetic resonance spectroscopy, magnetic resonance imaging, photoluminescence, and x-ray crystallography. Creatively, these researchers have adapted lanthanide-binding tags for x-ray fluorescence microscopy. These tags are well-suited for biological imaging because lanthanide elements are extremely rare within living organisms. The authors present a variety of beautiful, colored images in bacteria to demonstrate that these tags can be used for two- and three-dimensional imaging. Figure 1 shows high-resolution images from the APS Bionanoprobe of elements.

The Bionanoprobe, which was at X-ray Science Division (XSD) beamline 21-ID-D and now is at XSD beamline 9-ID-B, both at the DOE’s APS, was used to perform two-dimensional x-ray fluorescence microscopy. The Hard X-ray Nanoprobe beamline 3-ID at the DOE’s National Synchrotron Light Source II (NSLS-II) at Brookhaven National Laboratory was used for the three-dimensional x-ray nanotomography work. Both the APS and NSLS-II are Office of Science user facilities.

This research demonstrates that x-ray imaging can be performed in the X, Y, and Z dimensions using lanthanide-binding tags. Since these tags have an incredibly high affinity for lanthanides, they can be used at low, non-toxic concentrations. Protein sequences are amenable to their incorporation and their small size means that they don’t hinder a protein’s ability to carry out its physiological functions. These data demonstrate that this approach can be used to generate high-quality images with a nanoscale resolution. Since x-rays have a long penetration depth, this method could be feasibly applied to imaging in tissues. Future research should build upon these findings and aim to explore what novel insights can be gleaned from the unique combination of lanthanide-binding tags and x-ray imaging.  ― Alicia Surrao

The U.S. Department of Energy's Office of Science is the single largest supporter of basic research in the physical science