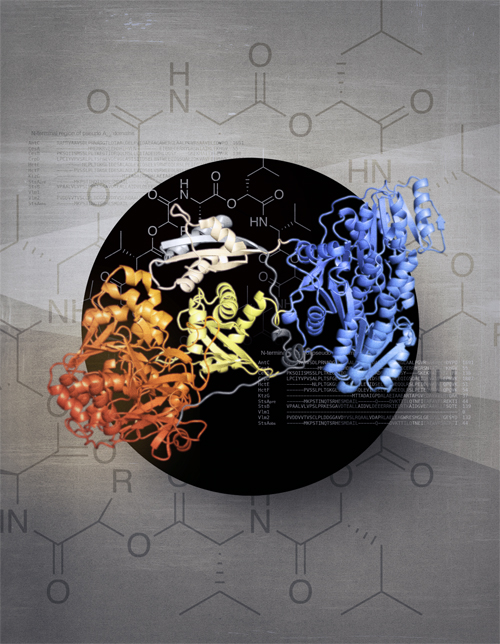 Humans are currently living longer lives than ever before. Our improved longevity is, in part, thanks to the development of effective drugs that can treat infection and disease. The antibiotic daptomycin, for example, can treat complicated bacterial skin and blood infections. Another example is the immunosuppressant cyclosporin, which can help prevent someone from rejecting a vital organ transplant. Yet another example is the antifungal drug caspofungin, which can be given intravenously to treat patients with a serious fungal infection. What do these three very different drugs have in common? They are each produced by enzymes referred to as nonribosomal peptide synthetases. Nonribosomal peptide synthetases are nanomachines that construct a variety of molecules which are utilized in the clinic. Recent research at the U.S. Department of Energy’s Advanced Photon Source (APS) has significantly furthered our understanding of how these nanomachines synthesize molecules. The researchers revealed the structural basis of this synthetic process and these novel findings published in the journal Nature Chemical Biology create the exciting possibility of designing new, effective drugs to improve human health.

In biology, proteins can be thought of as the primary molecular workers. They are responsible for carrying out various cellular tasks, such as transporting resources or waste from one part of a cell to another. Enzymes are an especially important protein type as they have a unique ability to accelerate chemical reactions. A key example would be the multi-domain class of enzymes referred to as nonribosomal peptide synthetases (NRPSs). These enzymes, which are made up of different sections called modules, can be likened to assembly line machines in factories. NRPSs are nanomachines that add building blocks to a growing molecular chain. The molecular product built by NRPSs is referred to as a nonribosomal peptide or depsipeptide. The term “nonribosomal” means that these molecules are built outside of ribosomes, which are more classical molecular machines that synthesize proteins. Peptides are made up of amino acid building blocks and the term “depsipeptide” describes a peptide with a unique chemical structure (i.e., where one or more amide groups are replaced with an ester group). Depsipeptides contain both hydroxyl acid and amino acid residues, the former of which are often derived from α-keto acid substrates. Keto acids play important biological roles—e.g., keto acids are converted into energy in response to lengthy periods of food deprivation, sometimes known as intermittent fasting.

NRPS enzymes have significant clinical relevance as they produce a plethora of different drugs, such as daptomycin, cyclosporin, and caspofungin. Daptomycin is an antibiotic that can be injected to treat bacterial blood infections as well as complicated skin infections. For organ transplant recipients, the immunosuppressant cyclosporine can be provided orally to prevent transplant rejection. Caspofungin is an antifungal drug that can treat fungal infections of the blood and esophagus. Specific examples of depsipeptides that serve important societal roles include the piscicide antimycin, the anti-cancer agent cryptophycin, and the insecticide beauvericin. Many of these important compounds—such as antimycin and cryptophycin—derive their hydroxyl acid residues from α-keto acid substrates. NRPS enzymes and depsipeptides therefore have palpably useful roles for the promotion of human health.

In this study by researchers from McGill University (Canada) and Yale University, substantial structural insights have been gleaned into NRPSs. The researchers have unveiled the architecture of NRPS modules and identified the mechanism by which α-keto acids are incorporated into the assembly process. Figure 1 displays the surprising architecture for modules that use α-keto acids. Since many nonribosomal depsipeptides derive their hydroxyl acid residue from α-keto acids, this sheds light onto a paramount part of nonribosomal depsipeptide synthesis. Molecular x-ray crystallography studies were performed at the Northeastern Collaborative Access Team beamlines 24-ID-C and 24-ID-E, and at the Canadian Light Source beamline 08ID-1 to obtain important structural data.

This research opens important possibilities for future research. Since a key part of nonribosomal depsipeptides—the hydroxyl acid residue—are often derived from α-keto acids, these findings advance our collective understanding of how these medically useful molecules are produced. With this knowledge, it is theoretically possible to manipulate this machinery to produce new, potent drugs capable of further improving human health.  ― Alicia Surrao

This work was supported by a Canada Research Chair and NSERC Discovery Grant no. 418420 to T.M.S. The Northeastern Collaborative Access Team beamlines are funded by the National Institute of General Medical Sciences from the National Institutes of Health (NIH) (P30 GM124165). The Eiger 16M detector on 24-ID-E is funded by a NIH-ORIP HEI grant (S10OD021527). This research used resources of the Advanced Photon Source, a U.S. Department of Energy (DOE) Office of Science User Facility operated for the DOE Office of Science by Argonne National Laboratory under Contract No. DE-AC02-06CH11357.