Solving the Structure of a Clinically Interesting Protein Associated with Schizophrenia 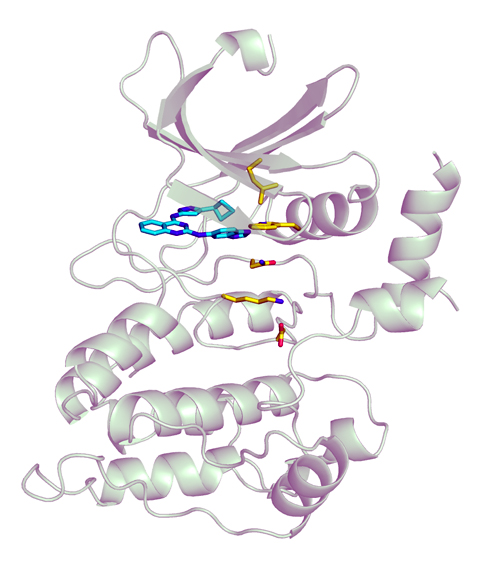 The psychiatric disorder schizophrenia, which causes hallucinations and delusions, has been shown to be associated with mutations in the gene ULK4. Further supporting a functional role for ULK4 in the brain, inhibition of this protein in mice disrupts the development of the cerebral cortex. Although the data strongly suggest an important neurological role for ULK4, very little is known about this protein, but impactful work by researchers who carried out studies at the U.S. Department of Energy’s Advanced Photon Source has helped make this protein considerably less enigmatic. Their work provides a high-resolution structure of ULK4 and demonstrates that it can bind to the energy molecule ATP. In addition to these findings, the authors identified small molecules capable of directly binding ULK4. These small molecules will make for invaluable research tools that will help facilitate future research into the biological role of ULK4. Given that schizophrenia is one of the most severe psychiatric disorders, these data are highly significant and create the possibility of developing novel anti-psychotic therapeutics.

In mammals, there are five proteins that make up the ULK family: ULK1, ULK2, ULK3, ULK4, and STK36. Deletion mutations in the gene ULK4 were previously found in patients diagnosed with schizophrenia as well as in patients doubly diagnosed with schizophrenia and bipolar disorder. Schizophrenia, which is one of the most severe psychiatric disorders that requires lifelong treatment, can present with symptoms such as hallucinations and delusions. Bipolar disorder is also a lifelong condition that can present with delusional or hallucinatory symptoms. Given the serious, chronic nature of these neuropsychiatric disorders, the abovementioned finding regarding ULK4 is clinically significant. Further corroborating a functional role for ULK4 in the brain, inhibiting ULK4 in mice perturbs the development of the cerebral cortex. The cerebral cortex is an important outer layer of the brain that fulfills many critical functions, such as receiving sensory information. Mice lacking the related genes ULK1 and ULK2 display both neurological and nerve fiber defects. These collective data suggest that ULK4 plays a paramount role in mammalian brain function.

Outside of these findings, very little is known about ULK4. The protein is specific to neurons and is classified as a pseudokinase. Kinase enzymes have the ability to transfer a phosphate group to a target, a process referred to as “phosphorylation,” that plays an important regulatory function biologically. For example, the phosphorylation of a protein can make it either active or inactive. Unlike kinase enzymes, pseudokinase enzymes have a modified kinase domain that is presumably inactive: ULK1 and ULK2 are capable of transferring phosphates to targets while ULK4 is unable to do this. This raises the intriguing question of what ULK4 is doing on a molecular level.

Exciting answers to this question were provided in a recent study published in the Journal of the American Chemical Society by researchers from the Icahn School of Medicine at Mount Sinai and Yale University. This work unveiled the first-ever structure of ULK4. Figure 1 displays the structure of the ULK4 pseudokinase domain bound to an inhibitor, as determined at the Life Sciences Collaborative Access Team beamline 21-ID-D at the APS (the APS is an Office of Science user facility at Argonne National Laboratory). This high-resolution structure discovered by the authors confirmed the absence of phosphotransfer activity (i.e., the lack of an ability to transfer a phosphate group to a target) and revealed that ULK4 strongly binds to the molecule ATP. This is a highly intriguing finding as ATP is what cells use for energy. (ATP contains three phosphoryl groups and the cleavage of one of these phosphates produces useable energy.) The authors additionally identified a magnesium-independent mechanism by which ULK4 binds to ATP. This mechanism involves the rare utilization of a hydrophobic bridge in the active site (i.e., binding region) of ULK4. Lastly, the work identifies various small molecules that are capable of physically interacting with ULK4 and have the potential to accelerate our understanding of ULK4’s biological role.

Taken together, these data have significantly illuminated the biological role of ULK4. While many interesting questions remain to be solved, it is now known that ULK4 directly binds ATP. In addition, knowing the structure of ULK4 will accelerate future research into how ULK4 affects brain health. Knowledge of the structure also allows for the development of potent, sensitive drugs targeting ULK4. Given ULK4’s connection to psychiatric disorders, this may ultimately lead to the development of novel drugs that improve patient health.   ― Alicia Surrao

This work was supported by U.S. National Institutes of Health grants K22CA201103 and GM124838 (M.B.L.) and GM108911 (A.S.). Use of the Life Scireces Collaborative Access Team facility at APS Sector 21 was supported by the Michigan Economic Development Corporation and the Michigan Technology Tri-Corridor (Grant 085P1000817). This work was supported in part through the computational resources and staﬀ expertise provided by the Department of Scientiﬁc Computing at the Icahn School of Medicine at Mount Sinai. This research used resources of the Advanced Photon Source, a U.S. Department of Energy (DOE) Oﬃce of Science User Facility operated for the DOE Oﬃce of Science by Argonne National Laboratory under Contract No. DE-AC02-06CH11357.