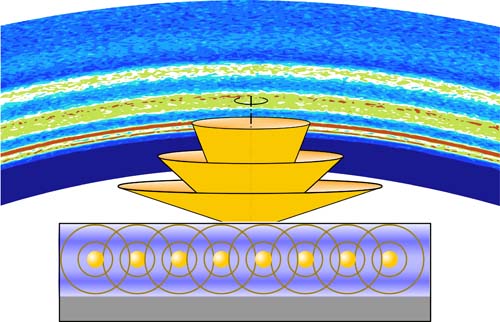 With ultra-thin nanostructure films now an indispensable component of many electronic and photonic technologies, the ability to accurately observe and characterize their morphology and dynamics is crucial for achieving their optimal design and synthesis techniques.  But currently available structural probes are rather limited in their sensitivity, resolution, and in operando ability to probe nanometer-size films.  Researchers from the U.S. Department of Energy’s Advanced Photon Source (APS) have demonstrated a new technique using x-ray fluorescence holography (XFH) that exploits the characteristics of these ultra-thin films to serve as a waveguide that creates a detailed fluorescence hologram that can provide a sub-nanometer spatial resolution of film structure.  Because of its flexibility and ability to be used for in situ and time-resolved studies, it can be used in conjunction with other techniques such as grazing-incidence small-angle x-ray scattering (GISAXS) or reflectivity studies, providing the power to address a broad range of questions concerning ultra-thin film nanostructures. Their work appeared in the journal Nature Communications.

The technique, which the team calls “x-ray waveguide fluorescence holography (XWFH, Fig. 1),” is similar to XFH techniques used in crystallography in that it forms holograms through the interference of reference and object waves.  Unlike the three-dimensional normal and inverse XFH modes processes, XWFH combines them in a mixed mode to produce a two-dimensional distribution, with the layered thin film nanostructure creating an x-ray standing wave that modulates the normally isotropic fluorescence wave.

The research team used the XWFH technique to study the structure and kinetics of gold nanoparticle monolayers sandwiched between two polymer layers.  A model-independent reconstruction algorithm based on dynamical scattering theories was used to reconstruct the results of the XWFH scans along with simultaneous reflectivity and GISAXS data.  The experiments were conducted at the X-ray Science Division (XSD) 7-ID-C x-ray beamline at the APS, an Office of Science user facility at Argonne National Laboratory. The 7-ID-C beamline is operated by the XSD Time-Resolved Research Group.

To avoid loss of x-ray signal and decreased signal-to-noise ratio due to penetration of the film’s palladium substrate, the incident angle in this work was kept at 0.125° for both the XWFH and GISAXS measurements.  This also allowed the optimal enhancement of the electric field within the gold monolayer, which lead to the formation of the x-ray standing wave that acted as a waveguide.  The resulting fluorescence of the gold atoms then exited the waveguide at discrete exit angles, forming a concentric cone-shaped hologram collected at the detector.

Three types of samples were used, with polymer layers of different molecular weights (low [LL], high [HH], and both [LH]) to allow in situ studies of the diffusion kinetics of the gold nanoparticles under annealing.  The annealing process altered the monolayer's electron density profile as well as atomic number density, thus providing valuable information on its rheological properties.  Both the XWFH and GISAXS techniques showed that the density of the layer smoothed out and decreased as annealing proceeded.  Meanwhile, the reflectivity measurements were relatively insensitive to these changes, which the investigators note is largely due to the greater sensitivity of XWFH and GISAXS to the electric field changes in the waveguide.  The LL and HH samples showed the fastest and slowest diffusion kinetics, respectively, with the mixed samples in between.

The mixed-mode XWFH technique can also be simplified by performing it either in grazing-incidence (GIXRF, grazing-incidence x-ray fluorescence) or grazing-exit (GEXRF, grazing-incidence x-ray fluorescence) configurations, each with particular advantages and disadvantages.  In the GIXRF configuration, a dominant standing x-ray wave above the film substrate provides an extremely sensitive means to probe the nanostructure, but this requires a highly collimated and precisely aligned incident x-ray beam.  The GEXRF technique does not require quite the same precision and is well-suited for in situ and time-resolved studies, but also creates a large elastic scattering background that makes data interpretation and reconstruction more difficult.  The current work avoids these problems by combining both approaches, so that the characteristics of grazing-incidence and grazing-exit angles complement each other.

The dynamical reconstruction algorithm of the XWFH hologram used by the experimenters includes all of the elastic and fluorescence energies engaged by the x-ray standing wave, allowing element-specific nanostructures to be characterized with high resolution.

The XWFH concept and reconstruction strategies can combine with the novel coherent surface scattering imaging (CSSI) technique to provide high-resolution chemical and structural information for thin films. A one-of-kind CSSI beamline is under design and development for the APS-Upgrade.

Z.J. was supported by the U.S. Department of Energy (DOE) Early Career Research Program. The project is partially supported by an Argonne Laboratory Directed Research and Development fund. This research used resources of the Advanced Photon Source, a U.S. DOE Ofﬁce of Science User Facility operated for the DOE Ofﬁce of Science by Argonne National Laboratory under Contract No. DE-AC02-06CH11357.