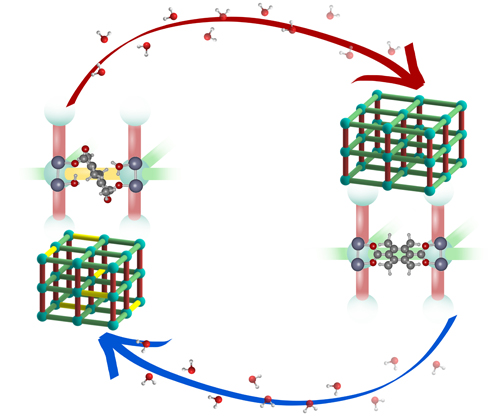 Most metal-organic frameworks (MOFs) are unstable in the presence of water, limiting their application, but some can adsorb water into active sites and remain stable. Although their bonds may rearrange, there is no irreversible structural change or degradation. Researchers using the U.S. Department of Energy’s Advanced Photon Source (APS) revealed crystallographic evidence of the importance of water loading effects on a metal-organic framework that does not experience large-scale structural changes. By obtaining a better understanding of these substances, their usefulness in important industrial and even medical applications can be increased.

MOFs are crystalline, nanoporous materials formed by the assembly of inorganic nodes and multitopic organic linkers. MOF structures are tunable; they can be altered to match their properties to the purpose of the application, such as gas separation and storage to catalysis, chemical sensing, and drug delivery. A better understanding of the chemical stability and guest-host interactions in MOFs will help researchers expand their applications.

Studies of some guest-host interactions of water on MOFs reveal their stability and adsorptive properties. Water guests in MOF hosts can have a wide variety of interactions due to the highly directional bonding behavior of water. The dynamic structural response to the water molecules are the proposed source of stability in some MOFs; they induce bond rearrangement in the MOF lattice without causing irreversible structural changes.

The directionality of hydrogen bonding in water leads to guest-host interactions within the MOF framework that affects the stability and absorption of the material. Competitive water adsorption changes the properties of the MOF. Water can occupy active sites to encourage catalytic reactions or can co-adsorb at some adsorption sites during gas separation and storage.

For this study, researchers from the Georgia Institute of Technology, the University of Amsterdam (the Netherlands), the University of Chicago, and Argonne National Laboratory synthesized a MOF framework with methyl groups on the terephthalate ligand. This MOF was chosen because the methyl groups give the framework the ability to adsorb relatively large amounts of water and retain stability and low-pressure CO2 affinity. The material also can release water without altering its structure. The researchers performed three separate water adsorption experiments on three different crystalline structures. The synthesized MOF was exposed to moisture to test each structure’s equilibrium water loading and to determine how water adsorption causes reversible changes in the structure.

The researchers obtained information on crystallographic lattice parameters, water siting, and water-induced defect structure. In situ powder diffraction experiments were performed at X-ray Science Division beamline 17-BM-B of the APS, an Office of Science user facility at Argonne. In situ single-crystal x-ray diffraction experiments were performed at the ChemMatCARS beamline 15-ID-D of the APS. They determined the quantitative structural response of each lattice in the three regimes.

While each MOF maintained its porosity and crystallinity after exposure to water, water adsorption caused still structural changes at the molecular level due to guest-host interactions such as water-induced bond rearrangements. This work suggests a potential source of stability in some MOFs. However, in the experiments, water guests caused dynamic and reversible structural changes even at low guest loading in the unit cell parameters, microstrain, vibrational spectra and atomic structure. Structural changes continued with guest loading, although a static simulated framework may not be appropriate for understanding the structural stability.

This research highlights the need to investigate stable MOFs to understand the dynamic structural response as source of their stability. Such an understanding can help guide the design of stable MOFs. In the future, researchers will sample the coordination of water within the MOF framework to understand the energy barrier. Although this work did not shed light on the ligand functionality and coordination environment of many MOFs, it reveals many of the factors that affect MOF performance and stability.  ― Dana Desonie

This work was supported as a part of the Center for Understanding and Control of Acid Gas-Induced Evolution of Materials for Energy, an Energy Frontier Research Center funded by the US Department of Energy, Office of Science, Basic Energy Sciences under award no. DE-SC0012577. N.C.B. acknowledges support from the National Science Foundation (NSF) Graduate Research Fellowship and the Graduate Research Opportunities Worldwide (GROW) award under grant no. DGE-1148903. D.D. acknowledges support from the Netherlands Research Council for Chemical Sciences through a VIDI grant and the Dutch Research Council (NWO) Exacte Wetenschappen (Physical Sciences) for the use of supercomputer facilities with financial support from the NWO. ChemMatCARS is supported by the Divisions of Chemistry (CHE) and Materials Research (DMR), NSF, under grant no. NSF/CHE- 1834750. This research used resources of the Advanced Photon Source, a U.S. DOE Office of Science User Facility operated for the DOE Office of Science by Argonne National Laboratory.