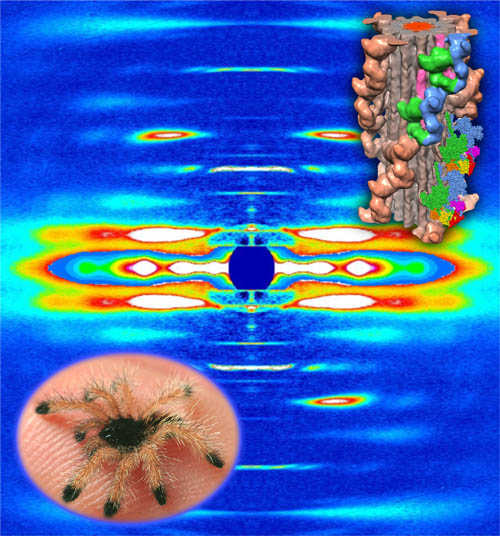 The human heart is a remarkable feat of evolutionary engineering. Beating about 100,000 times per day and pumping nearly 2,000 gallons of blood through an interconnected series of veins, arteries, and capillaries that spans a distance greater than 60,000 miles, the heart is the most important muscle in the human body. Yet, heart disease remains the number one cause of death in the world, demonstrating the need for more research in heart physiology. Now a research team has found an unlikely source of inspiration for understanding how the human heart works and how we might design better drugs for conditions like hypertrophic cardiomyopathy: tarantulas. The source of nightmares for arachnophobes and the household pets for arachnophiles are inspiring researchers to take new approaches to understanding diseases that alter how heart muscle cells contract and relax. But, before getting to the human heart, there is more to learn about the physiology of tarantula muscles. The researchers set out to understand how contractions in tarantula muscle cells are activated and why are muscle twitches that follow a sustained muscle contraction (post-tetanic) more forceful than those that don’t (pre-tetanic). Some of their key findings were based on x-ray diffraction experiments conducted at the U.S. Department of Energy’s Advanced Photon Source (APS). Their results provide evidence that phosphorylation, the chemical addition of a phosphoryl group (PO3-) to an organic molecule, plays a key role in muscle activation and post-tetanic potentiation (PTP) in tarantula muscles.

Striated muscles are composed of thick and thin filaments that contain myosin and actin proteins, respectively. When activated, these two fibrous proteins interact to cause their relative sliding, resulting in the production of force and muscle shortening. In the fully relaxed phase, the researchers from the University of Massachusetts Medical School, the Illinois Institute of Technology, the Instituto Venezolano de Investigaciones Científicas (Venezuela), and Moscow State University (Russia) used x-ray diffraction (XRD) obtained at the Biophysics Collaborative Access Team x-ray beamline 18-ID at the APS to show that neighboring free and blocked myosin heads on the thick filament are arranged in an interacting-heads motif (IHM) within live tarantula muscles, supporting previous results obtained by cryogenic electron microscopy as seen in Fig. 1. In the case of fully relaxed muscles, there is little evidence of myosin phosphorylation before the tetanic contraction. (The APS is an Office of Science user facility at Argonne National Laboratory.) 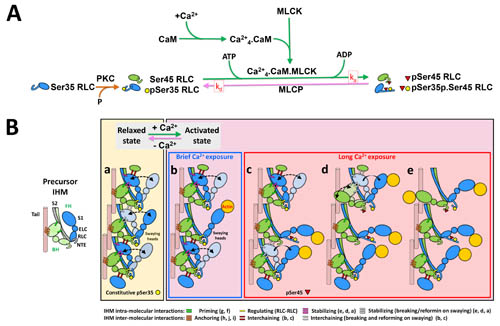 Interestingly, the mechanism for myosin activation in tarantulas is different than what has been observed in other species. There are examples in the literature that show direct binding of calcium ions, mechanosensing, or delayed stretch activation as the main activation step for releasing myosin so that it can bind with actin on the thin filament to start a muscle contraction.

Evolution has a way of slowly adapting our physiologies to best match our environmental conditions. A tarantula, which has a very sedentary lifestyle with small bursts of movement for capturing prey, may exhibit different muscle physiology than a frog.

Ultimately, understanding the ways that muscles contract and relax in many different species will provide a deeper understanding of how to protect the most important muscle in our bodies. ― Stephen Taylor

Research was supported by National Institutes of Health Grants National Institute of General Medical Sciences GM103622 (to T.I.), National Heart, Lung, and Blood Institute HL139883 (to Richard Moss and R.C.), National Institute of Arthritis and Musculoskeletal and Skin Diseases AR072036 (to R.C.), AR067279 (to R.C. and D. Warshaw), Office of Research Infrastructure Programs 1S10OD018090-01 (to T.I.), and Russia State Program AAAA-A19-119012990119-3 (to N.K. and A.T.). This research used resources of the Advanced Photon Source, a U.S. DOE Ofﬁce of Science User Facility operated for the DOE Ofﬁce of Science by Argonne National Laboratory under Contract No. DE-AC02-06CH11357.