Using an Analog to Investigate the Interiors of “Super-Earths” 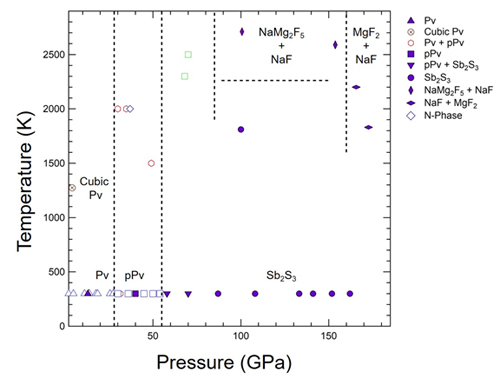 MgSiO3 perovskite, also known as bridgmanite, is thought to be the most abundant mineral in the Earth’s lower mantle. At the high pressures and temperatures of the lowermost mantle, about 150 kilometers below the Earth’s surface, bridgmanite undergoes a phase transition, or a rearrangement of its structure, into a phase known as post-perovskite (pPv). Although pPv is most likely the final silicate phase in the Earth’s interior, other “post-post-perovskite” phases may exist in the interiors of much larger rocky planets (“super-Earths” up to ~10 Earth masses in size) recently discovered outside our solar system. Laboratory experiments to replicate the interior conditions of these giant planets (up to ~4000 GPa , ~10,000 K) are extremely challenging and generally beyond the reach of even state-of-the-art experimental techniques for static compression, so the predicted phases for MgSiO3 have largely been based on quantum mechanical computations without experimental validation. One way to get around this conundrum is to perform experiments using analogs of bridgmanite that might display similar phase transitions but at lower pressures and temperatures. One of these suitable analogs is neighborite, or NaMgF3. Scientists used the U.S. Department of Energy’s (DOE’s) Advanced Photon Source (APS) to probe the structural changes of neighborite in situ at extreme conditions. Their results show that neighborite undergoes multiple pressure-induced phase transitions and eventually decomposes into a mixture of binary fluorides. These results using neighborite as an analog could aid in understanding the possible phase transitions and their effects in the interiors of the super-Earths.

NaMgF3 adopts the perovskite (Pv) structure at ambient pressure and undergoes a pressure-induced phase transition to a pPV form at only 19 gigapascals (GPa) at room temperature, compared to ~125 GPa and 2000 K for bridgmanite. Determining what phase transitions neighborite undergoes as pressure and temperature increase could provide insight into bridgmanite’s post-post-perovskite phases.

For these experiments, the researchers from Princeton University and The University of Chicago placed neighborite into a diamond anvil cell, a device that can generate extraordinarily high pressures. The researchers then ratcheted up the pressure to ~160 GPa, inducing high temperatures (∼2710 K) with a laser toward the pressure peak to test the stability of the resulting phases, and collected x-ray diffraction (XRD) data at the GeoSoilEnviroCARS 13-ID-D x-ray beamline at the APS. (The APS is an Office of Science user facility at Argonne National Laboratory.)

However, at 58 GPa, the diffraction pattern could not be indexed solely using results from previous studies. Any remnants of the known patterns completely faded at ~90 GPa, indicating the presence of a new phase. Theoretical predictions suggest that this phase is an Sb2S3-type, with a structure akin to the mineral stibnite. As the researchers continued to incrementally raise the pressure, they heated the sample with a laser to ~1810 K for 30 minutes and ~2710 K for 20 minutes, showing that this phase remained stable even under prolonged heating.

When the researchers maintained the pressure at ~90 GPa and raised the temperature to ~2590 K, an NaF peak appeared in the diffraction results, suggesting that the compound had at least partially dissociated. Indexing suggests that the other compound in the sample is NaMg2F5. This diffraction pattern remained stable at ~134 GPa, but changed again at ~162 GPa at ~1830 K, with indexing suggesting that this sample contained a mixture of NaF and MgF2. Figure 1 shows the proposed phase diagram in NaMgF3.

These findings from neighborite closely match theoretical studies of bridgmanite, which suggest that this perovskite also undergoes similar kinds of phase transitions that culminate into a two-stage breakdown into binary compounds.

The different bridgmanite phase transitions could significantly affect mantle dynamics, playing a key role in layering and viscosity, which in turn affect heat flow and long-term thermal evolution, and adding to our understanding of the super-Earths that lurk beyond our solar system.  ― Christen Brownlee

This work was funded by National Science Foundation (NSF) Grants EAR-1644614 and EAR-1836852. GeoSoilEnviroCARS is supported by NSF Earth Sciences Grant EAR-1634415 and the U.S. Department of Energy (DOE) Geosciences Grant DE-FG02-94ER14466. The gas-loading facility at GSECARS is partially supported by the Consortium for Materials Properties Research in Earth Sciences under NSF Cooperative Agreement EAR-1606856. This research used resources of the Advanced Photon Source, a U.S. DOE Oﬃce of Science User Facility operated for the DOE Oﬃce of Science by Argonne National Laboratory under Contract No. DE-AC02-06CH11357.