Vanadium Nitride Supercapacitors Save the Day 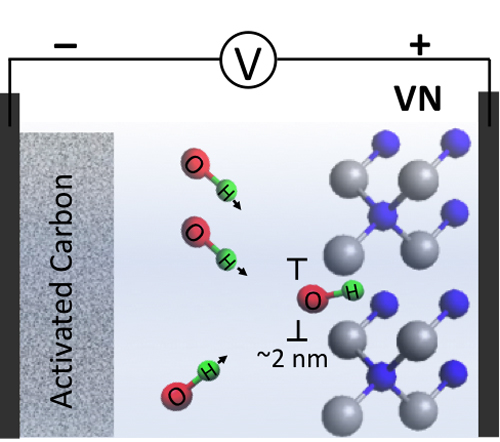 Sometimes you just need lots of little bursts of power fast, and for that, there's not much that's better than a supercapacitor. These energy storage devices are found in cameras, electric vehicles, trains, airplanes, and many other advanced electronics, but the cost for the materials used in standard supercapacitors can be high, preventing wider use. Scientists are exploring transition metal nitrides as low-cost electrode materials for supercapacitors due to their high surface areas and high electronic conductivities. Vanadium nitrides have a particularly high capacitance, but little has been known about the charge storage mechanism, limiting the utilization of the material in supercapacitors. To close this knowledge gap, a research team characterized vanadium nitride electrodes in situ using the U.S. Department of Energy’s Advanced Photon Source (APS), among other experiments. Their findings revealed that the key to vanadium nitride's pseudocapacitance is the movement of anions into and out of the material's micropores. This insight paves the way for a future of cost-effective energy storage systems with high-energy and high-power densities.

Supercapacitor electrode materials like vanadium nitride store charges via pseudocapacitive mechanisms. Pseudocapacitance is the electrochemical storage of energy and relies on the very fast oxidation or reduction of a chemical substance at the surface of an electrode. These reactions are called “faradaic redox reactions” and they are at the heart of a material's pseudocapacitance capabilities. The researchers from the University of Michigan and Oak Ridge National Laboratory knew that these faradaic redox reactions were happening on the vanadium nitride surfaces, but the details needed to be sorted out to maximize the potential of this material.

As a first step, the researchers synthesized the nanostructured vanadium nitride from a V2O5 precursor with a temperature-controlled reaction (Fig. 1). They characterized the surface area and pore size distribution of the material, finding that the average crystallite size was about 21 nanometers (nm). Pore-size analysis indicated the presence of micropores (those less than 2 nm across) as well as mesopores (2-50 nm). There was also a gap in pores in the 3-10-nm range, which had been previously reported. The surface area measurements suggested the material was highly porous, a fact that facilitates experiments probing the adsorption of electrolyte ions on the vanadium nitride material during chemical cycling.

Next, the team performed a series of studies aimed at unraveling the electrochemical mechanism. These experiments were performed in situ while the reaction was taking place, allowing the researchers to observe the redox cycling as it happened. To initiate the reaction, vanadium nitride electrodes were submerged in an alkaline electrolyte solution; previous research had shown that hydroxide ions were the active ion that triggers vanadium nitride's pseudocapacitance. The researchers collected in situ small-angle neutron scattering (SANS) at Oak Ridge National Laboratory (ORNL), using a General Purpose SANS instrument; and in situ x-ray absorption spectroscopy (XAS) data at the DuPont-Northwestern-Dow Collaborative Access Team (DND-CAT) bending magnet beamline station 5-BM-D at the APS, along with other physical and electrochemical characteristics. Taken together, they found some surprising results. 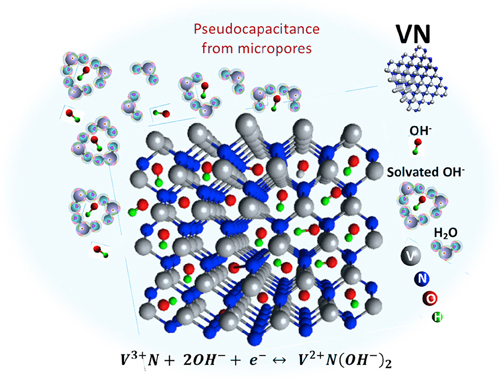 Previously, scientists had assumed that vanadium nitride's pseudocapacitance was mostly tethered to the large pores that are more accessible to electrolyte ions and therefore can store more charge. But in reality, the SANS and XAS results revealed that the hydroxide anion was spending a lot of time in vanadium nitride's micropores, and that was the real source of pseudocapacitance (Fig. 2). As the anion entered a micropore, the vanadium metal became reduced. Then as the anion exited the micropore, the vanadium metal became oxidized. The electrochemical charging and discharging data suggested that pseudocapacitances above 1300 Fg-1 could be achieved in 1.2 V of aqueous alkaline electrolytes.