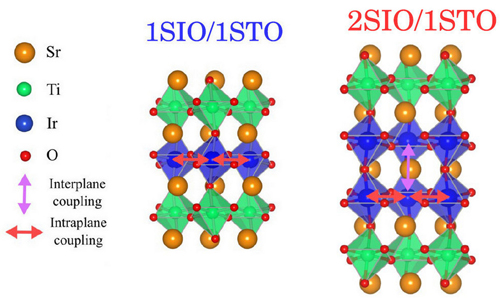 Superlattices (SLs) are engineered materials that often exhibit technologically promising features, for instance unique electronic properties. A SL is typically composed of alternating layers of two or more crystalline compounds. Many types of SLs have been constructed, and new types are continuously being developed. In this study, researchers investigated the magnetic properties of a superlattice consisting of single or double layers of  the iridate compound SrIrO3 separated by a single layer of strontium-titanate (SrTiO3).  X-ray experiments performed by a multi-national team of researchers at three different beamlines of the U.S. Department of Energy’s (DOE’s) Advanced Photon Source (APS) probed the magnetic and crystalline properties of the two superlattices. A notable achievement was the first-ever use of resonant inelastic x-ray scattering (RIXS) to characterize the magnetic interactions between the SrTiO3 and SrIrO3 layers. Particularly striking was the magnetic behavior of the two-layer SrIrO3 superlattice, which was much stronger and oriented differently than expected. The researchers further determined that the net magnetic moment and magnetic orientation of this superlattice can be readily tuned via simple parameters, for instance by modifying the superlattice's underlying substrate. The magnetic tunability described in this study should prove applicable to numerous other superlattice systems, which may ultimately be adapted for improved electronic devices.

Both SrTiO3 and SrIrO3 are members of the perovskite family of compounds. Perovskites are composed of octahedra, as shown in Fig. 1. The octahedra associated with each SrTiO3 layer appear green and encapsulate a single titanium atom, while SrIrO3 octahedra are colored blue with one iridium atom inside. Note that the octahedra in each layer are tilted relative to the octahedra of adjacent layers. The unusual structure of perovskites cause these compounds to exhibit many unusual electric and magnetic properties, such as interactions between the spin and motion of certain electrons in the compound, referred to as spin-orbit coupling (SOC), which can significantly alter the internal magnetic fields of the superlattice.

Although RIXS is ideal for revealing superlattice magnetic behavior, applying the technique was problematic. This is because the high-energy x-rays tend to penetrate deeply into a sample, hence mostly pass right through the thin-film superlattice. The researchers overcame this obstacle in two ways. First, the superlattices were thickened by depositing many additional layers. And second, the RIXS measurements were performed at an extremely shallow angle of 1º from the sample surface. Both these adaptations provided the x-rays with sufficient path length within the sample to interact strongly with the superlattice.

The RIXS measurements revealed ferromagnetism in both superlattice types within the planes formed by their iridium octahedra, as illustrated in Fig. 1 (red arrows). While the in-plane magnetism is present in both superlattices, only 2SIO/1STO exhibited an out-of-plane magnetism (pink arrow in Fig. 1 right-hand superlattice). The strongly directional magnetic interactions between superlattice planes is an unusual characteristic that the researchers anticipate will be searched for in related types of iridium crystals.

Theoretical modeling indicated that the observed out-of-plane magnetism in the 2SIO/1STO superlattice is highly dependent upon the tilt between the octahedra of adjacent layers. Even slight shifts in this tilt can produce significant changes in the magnetic states and other quantum behavior of the superlattice. The researchers suggest that the octahedral tilt can be manipulated via substrate modification, thereby controlling the superlattice's quantum behavior. This manipulation could also be realized by substituting calcium for strontium atoms. The innovative RIXS measurements performed in this study, as well as the manipulation of quantum behavior through physical or chemical changes, should be applicable to many other superlattice systems. ― Philip Koth

This material is based upon work supported by the U.S. Department of Energy (DOE) Office of Science-Basic Energy Sciences, Early Career Award Program, under Award No. 1047478. Work at Brookhaven National Laboratory was supported by the U.S. DOE Office of Science-Basic Energy Sciences, under Contract No. DE-SC0012704. J.L. acknowledges the support by the Science Alliance Joint Directed Research & Development Program and the Transdisciplinary Academy Program at the University of Tennessee. J.L. also acknowledges support by the Department of Defense-Defense Advanced Research Projects Agency under Grant No. HR0011-16-1-0005. A portion of the fabrication and characterization was conducted at the Center for Nanophase Materials Sciences, which is a DOE Office of Science User Facility. X. Liu acknowledges support by MOST (Grant No. 2015CB921302) and CAS (Grant No. XDB07020200). This research used resources of the Advanced Photon Source, a U.S. DOE Office of Science User Facility operated for the DOE Office of Science by Argonne National Laboratory under Contract No. DE-AC02-06CH11357.