Cool Temperatures During Hibernation May Freeze Muscle Contraction to Save Energy 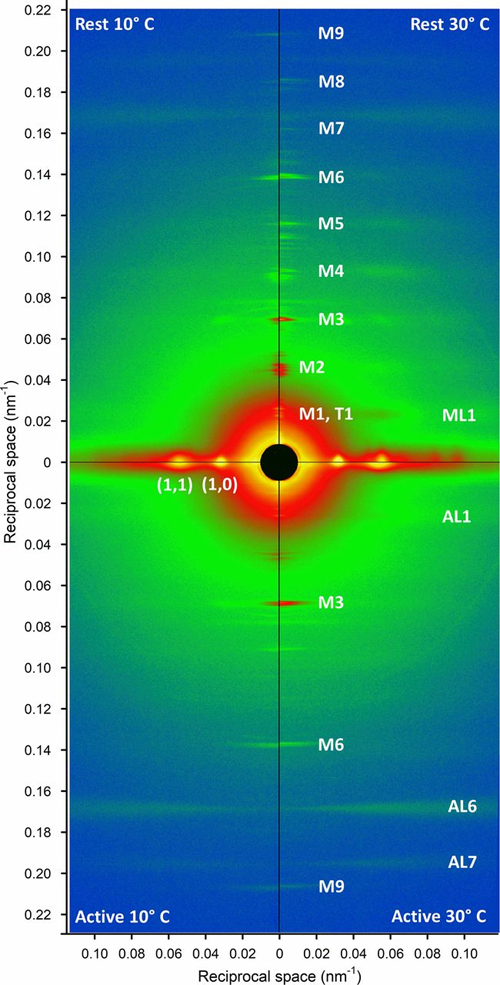 Striated muscle contraction is a highly regulated process that involves an orchestrated series of events within the muscle’s contractile units, which are also known as sarcomeres. In a recent study, which involved collecting x-ray diffraction data at the U.S. Department of Energy’s (DOE’s) Advanced Photon Source (APS), researchers studied the effect of low temperature on mammalian skeletal muscle contraction. They found that cooler temperatures reduce force generation by trapping filaments in the muscle sarcomeres in a refractory state that cannot undergo contraction and utilize adenosine triphosphate (ATP). This mechanism provides important insight into how hibernating animals may conserve energy while still allowing vital functions in the body to continue.

Muscle tissue’s repeating functional units, the sarcomeres, impart a striated or striped appearance to the tissue when examined under a microscope. Sarcomeres contain thin (containing the protein actin) and thick (containing the protein myosin) filaments that power contraction of skeletal muscle and cardiac muscle, both of which are striated.

Contraction of striated muscle is triggered when calcium enters the muscle fibers. This leads to structural changes in proteins known as troponin and tropomyosin that reside in the thin filament. Ultimately, this allows actin and myosin to interact with each other in a way that allows hydrolysis of ATP, the source of energy for muscle contraction.

However, recent studies have shown that structural changes in the thick filament play an important regulatory role in contraction. Researchers have discovered that when striated muscle is in its relaxed state, myosin is trapped in helical tracks on the surface of the thick filament, thus preventing its interaction with actin and hydrolysis of ATP. Additional studies have also found that myosin protein in relaxed muscle is sensitive to temperature changes.

A multi-national, multi-institution group of researchers recently set out to investigate the structural changes that take place in the thick filament of mammalian skeletal muscle in response to temperature changes. They vertically mounted sections of mouse skeletal muscle on the x-ray path of the Biophysics Collaborative Access Team (Bio-CAT) 18-ID-D x-ray beamline at the APS (the APS is an Office of Science user facility at Argonne National Laboratory). Then, they collected x-ray diffraction patterns (Fig. 1) from the muscle at different temperatures ranging from near-physiological at 35° C to 10° C.

The drop from physiological temperature to 10° C also produced a 3-fold reduction in the amount of force generated by the mouse muscle. This refractory state of the thick filament may help explain the decreased power output of mammalian muscle at cooler temperatures, and this could have important implications for hibernating animals. When animals enter hibernation, their body temperature drops to near ambient level, and their energy-costly metabolic activities also decrease. Based on the results of this study, which show that ATP hydrolysis and energy output also drop substantially in resting muscle under cooler temperatures, the researchers suggest that this mechanism may contribute to helping animals conserve energy during hibernation. Because muscles comprise approximately 40% of mammalian body mass, having a regulatory mechanism like this at low temperatures can further reduce ATP consumption during hibernation, while still maintaining the body’s vital functions.  ― Nicola Parry