Splitting Water in a Neutral Way 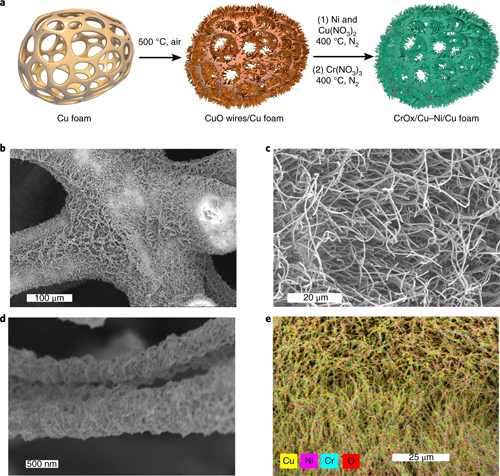 Hydrogen is a vital resource not only for various industrial purposes but also as an energy vector, such as in hydrogen fuel cells.  In fuel cells, hydrogen is combined with oxygen to create electricity and water, but the process can also be reversed in an electrolyzer, which uses electricity to produce hydrogen in what's known as water splitting or water dissociation.  However, the most effective catalysts for these hydrogen evolution reaction (HER) techniques, such as platinum, are most effective in acidic environments. A team of experimenters used the U.S. Department of Energy’s (DOE’s) Advanced Photon Source (APS) to study an electrolyzer design they developed that is highly effective in neutral conditions.  Their work was published in Nature Energy.

A method of achieving HER in neutral pH conditions would make large-scale hydrogen production easier and more efficient, allowing the use of seawater without prior desalination and catalysts based on cheap and readily available transition metals.  Neutral HER also facilitates the production of biofuels through processes involving microorganisms that are impossible in acidic media.  The two chief strategies for developing neutral HER electrocatalysts involve either adjusting the catalyst surface texture or incorporating additional compounds within the catalyst to improve water dissociation.

The investigators from the University of Toronto and LBNL tested catalysts using copper (Cu) for hydrogen (H) binding and a variety of metal oxide clusters for OH, measuring the HER activity.  They found that a CrOx/Cu system promoted the best HER performance.  To improve catalytic activity even further, they doped the Cu surface with Ni to take advantage of its strong hydrogen binding energy, then tested the deposition of the different components in various combinations.  This demonstrated that the order of CrOx and Cu-Ni deposition greatly affects the catalytic performance, with the CrOx/Cu-Ni system substantially more effective than the Cu-Ni/CrOx catalyst (Fig. 1).

While experiments confirmed that CrOx is not a particularly HER-active agent, it strongly modulates the oxidation of copper-nickel (Cu-Ni), particularly the Ni structure.  On the Cu-Ni/CrOx samples, it induces water dissociation, an effect, which can be maximized through an even dispersal on the Cu-Ni active layer.

The team used density functional theory (DFT) modeling to more closely investigate the catalytic activity of the CrOx/Cu-Ni system on four surfaces with various doping configurations.  They found that an Ni-doped surface greatly improves the stability of dissociated water.  The minimum energy barrier for water dissociation is seen with the hybrid catalyst.  Water dissociation is shown by the DFT calculations to be the major factor for H2 generation in the Cu-based catalysts, and can be improved with specific configurations of the Cu, Ni, and CrOx components.

The investigators then used the information obtained in these experiments to attempt the fabrication of the most optimal chromium-copper-nickel catalyst, depositing Ni and CrOx on a scaffolding composed of CuO nanowires.  Tests of the system's electrochemical performance displayed highly stable and impressive results, with a 48-mV overpotential at a current density of 10 mA cm-2 in a buffer electrolyte of pH 7.  This represents markedly superior performance compared to other known HER catalysts, and arises not merely from higher surface area but from the intrinsic structure that greatly reduces the energy barrier for water dissociation.

The work demonstrates that it is both possible and practical to create high-performance hydrogen evolution reaction catalysts that not only perform in neutral conditions but can do so without using rare and expensive elements.  The design principles devised by these researchers offer a major new direction for the development of large-scale seawater splitting and the production of hydrogen for efficient biofuels and energy systems.  ― Mark Wolverton

This work was supported by the Ontario Research Fund: Research Excellence Program, the Natural Sciences and Engineering Research Council (NSERC) of Canada, and the Connaught Global Challenge program of the University of Toronto. F.P.G.d.A. acknowledges financial support from the Connaught Fund. P.D.L acknowledges financial support from NSERC in the form of the Canada Graduate Scholarship – Doctoral (CGS-D) award. This research used resources of the Advanced Light Source, which is a DOE Office of Science User Facility under contract no. DE-AC02-05CH11231. This research also used resources of the Advanced Photon Source, an Office of Science User Facility operated for the U.S. DOE Office of Science by Argonne National Laboratory under contract no. DE-AC02-06CH11357, and the Canadian Light Source and its funding partners.