Dialing-Up Diamagnetism to Search for a New Material 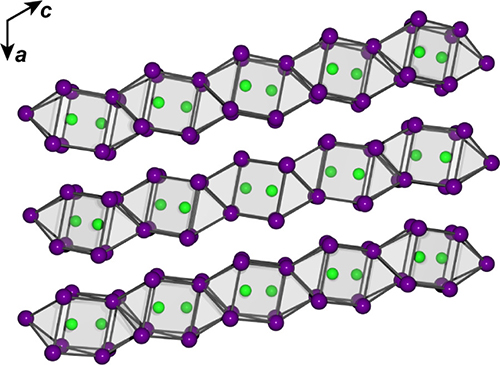 Chemistry’s magic is in its mixtures, the novel combinations of elements that make unexpected properties possible. Even simple, two-element compounds can surprise us. The classic example is sodium chloride, which combines element Na (which by itself is an explosive metal) with Cl (which, in the form of Cl2, is a poisonous gas) to create table salt. But many more esoteric compounds are yet to be explored. A team of chemists in search of novel two-dimensional compounds used the U.S. Department of Energy's (DOE's) Advanced Photon Source (APS) to look at a custom-made nickel bismuth compound and see how its bizarre structure might facilitate superconductivity or other new-to-science properties.

Nickel and bismuth are both metals known since ancient times. But combining them—nickel is a transition metal, and bismuth a heavy Group-7 element often confused with lead—has rarely been done. It could be very worthwhile, because both nickel and bismuth have unusual magnetic properties. Nickel is one of the four elements that are magnetic near room temperature; bismuth, on the other hand, is the strongest natural diamagnetic material known. Diamagnetic materials have a strange ability to produce the opposite of the magnetic field going through them. In simpler terms, metals like iron are attracted to magnets; metals like bismuth repel them.

Diamagnetism is not dramatic on the everyday scale of pens and apples and cars and other objects we can touch. But down on the scale of atoms and molecules, it can be significant. Diamagnetism is caused by the combined magnetic fields generated by electrons. Electrons generate magnetic fields in two ways: by orbiting their atoms, and by spinning on their axes at the same time. All those spinning electrons create tiny magnetic fields that add together in different ways, depending on the arrangement of atoms and electrons in space. It is hard to understand intuitively, because it depends on quantum mechanics. But in bismuth, the net result is that whenever the material is exposed to an external magnetic field, its internal magnetic fields generate an opposing field that repels the external one.

A team of researchers from Northwestern University, The University of Chicago, and the DOE's Argonne and Lawrence Livermore national laboratories were intrigued by nickel bismuth compounds. They were already familiar with NiBi (nickel bismuthide) and NiBi3 (nickel tribismuthide). NiBi3 forms itself into chains of Ni-Bi polyhedral that arrange in hexagonal patterns and it is a superconductor at low temperatures. They wondered what NiBi2 (nickel dibismuthide) would be like.

The challenge to making NiBi2 was that it wouldn’t form at regular atmospheric pressure. So the team used a diamond anvil cell (DAC), originally developed by geophysicists to study conditions deep within planets, to create the material. By combining bismuth and nickel in the right proportions and then heating and squeezing the mixture at about 14 gigapascals, a pressure close to what one would expect to find in the interior of Mercury, they made NiBi2 (Fig. 1).

Once the researchers had made NiBi2, they needed a very high-intensity, high-flux x-ray source to look at its structure. The High-Pressure CAT (HP-XSD) beamline 16-ID-B at the APS (an Office of Science user facility at Argonne) is specialized for just these sorts of applications. The team used the DAC in combination with the x-ray diffraction technique to reveal the atomic structure of the NiBi2. The data they obtained showed that NiBi2 forms into columns similar to those of NiBi3, but the columns are squashed together. To scale up the new intermetallic compound, they performed high-pressure reactions using the 1000-ton multi-anvil press at the GeoSoilEnviroCARS 13-ID-D beamline, also at the APS.

The researchers also confirmed that the material is indeed a superconductor at very cold temperatures close to that of liquid helium. Now, they are working on flaking it into single, two-dimensional sheets. They suspect that when NiBi2 electrons are confined to a single plane, and the bonds between the atoms are forced to localize in two dimensions, more intriguing properties may emerge.  ― Kim Krieger

The collaborative project between D.E.F. and S.D.J. is supported by Northwestern University (NU) through the Innovative Initiatives Incubator (I3). This experimental work is supported by the Air Force Office of Scientific Research (FA9550-17-1-0247). GeoSoilEnviroCARS is supported by the National Science Foundation (NSF) (EAR-1634415) and the U.S. DOE (DE-FG02-94ER14466). S.M.C. acknowledges support from the NSF Graduate Research Fellowship Program (GRFP) (DGE-1324585) and P.E.O. Scholar Award. Part of this work was performed under the auspices of the U.S. DOE by Lawrence Livermore National Security, LLC, under Contract DE-AC52-07NA27344. K.M.P. acknowledges support for the NSF GRFP (DGE-1656466) and the NU MRSEC URI (DMR-1121262). S.D.J. acknowledges support from NSF (DMR-1508577) and the Capital/DOE Alliance Center (CDAC) for providing beam time at HP-XSD. HP-XSD operations are supported by the U.S. DOE National Nuclear Security Administration under Award No. DE-NA0001974, with partial instrumentation funding by the NSF. Y.M. acknowledges the support of DOE-Basic Energy Sciences Materials Sciences and Engineering Division under Award No. DE-FG02-99ER45775. This research used resources of the Advanced Photon Source, a U.S. Department of Energy (DOE) Oﬃce of Science User Facility operated for the DOE Oﬃce of Science by Argonne National Laboratory under Contract No. DE-AC02-06CH11357.