Probing a Paradox in Pharmaceutical Formulation

Pharmaceuticals aren't much use if they can't get into the body in sufficient levels to perform their function. Some modern crystalline formulations have this problem, displaying relatively poor solubility and thus decreased bioavailability. One strategy to overcome this difficulty is the use of amorphous solid dispersions (ASD), which combine an amorphous form of an active drug with a polymeric excipient at the molecular level, making it easier to deliver necessary medications at their proper therapeutic levels. But more isn't always better. As the drug loading (DL) of ASDs is increased, a phenomenon called amorphous-amorphous phase separation (AAPS) can set in, reducing or even halting active drug release. To better understand this problem, researchers studied the process of AAPS in a model ASD system through direct in situ visualization using x-ray fluorescence (XRF) imaging at the U.S. Department of Energy’s Advanced Photon Source (APS). Their results published in the journal Molecular Pharmaceutics, open the way to some promising opportunities for the development and design of a new and improved ASD system.

Because the antiretroviral medication Ritonavir (RTV), commonly used to treat HIV/AIDS and hepatitis C, is poorly water-soluble, it is generally administered in an ASD formulation trade-named NORVIR®. For this study, the investigators from AbbVie, Inc., chose an ASD system combining RTV and a PVPVA (polyvinylpyrrolidine vinyl acetate) polymer, using thin films with DLs of 20, 25, 30, and 50 wt%, sealed in a humidity chamber at 100% relative humidity. Working with a colleague from Argonne, the team excited the ASD samples with x-rays and the fluorescence signals were collected at the X-ray Science Division 2-ID-E beamline of the APS, an Office Science user facility at Argonne (Fig. 1). The APS was selected for this study because its high photon flux permits good visualization of fast dynamic phenomena such as AAPS. 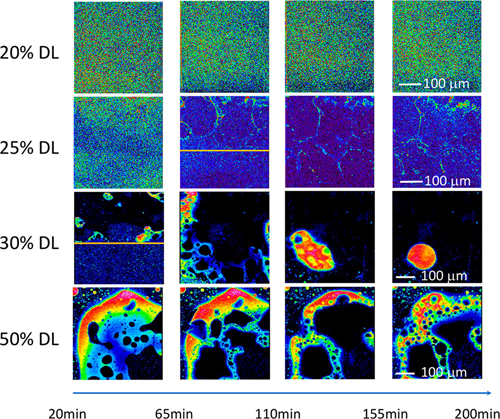 Each sample was first studied with a coarse scan of the entire film, after which a specific area was chosen for a finer-resolution scan. The intrinsic fluorescence signals from the RTV sulfur atoms were readily distinguishable from the sulfur-free PVPVA without any additional labeling (Fig. 2).

After approximately 10 minutes, AAPS was already seen occurring within the 50% DL films, at about 52 minutes in the 30% DL, and at 79 minutes in the 25% DL samples. The AAPS process evolves somewhat differently at the various DLs, with a less distinct separation between the RTV and PVPVA at 25% DL and only through part of the film thickness; whereas at 30% DL, clear separation is seen throughout the entire thickness of the film. Both the 20% DL and 25% DL sample films display 100% drug release, although this is somewhat delayed in the 25% DL film. The investigators hypothesize that because the AAPS is occurring only at the surface in the 25% DL film, drug release is still unaffected deeper inside the ASD. At 30% DL, however, the AAPS phenomenon penetrates deeper, reducing drug release to only about 50% at similar time scales. Later ex situ measurements of the behavior of the 20% DL sample showed that AAPS finally occurred about a week after exposure to 100% relative humidity conditions.

The results demonstrate strongly that higher levels of drug loading in ASDs actually impede rather than increase the efficiency of drug delivery, and thus its bioavailability, because of the onset of amorphous-amorphous phase separation affecting dissolution at those levels. While phase separation is too slow at DLs below about 20% to affect drug release in a meaningful way, it occurs much faster at higher DLs, changing the surface of a tablet to a layer of amorphous drug that prevents any further dissolution.

ASD formulations will remain an indispensable method for the effective delivery of new and essential drugs, making it important to find ways to increase their efficiency and effectiveness. By performing direct XRF visualization and thus a better understanding of the mechanics of the amorphous-amorphous phase separation in an ASD system, this in situ study opens up some promising opportunities for the development and design of new ASD systems. The upcoming APS Upgrade, which will provide orders of magnitude higher focus flux, will further enable the study of fast phase separation at higher drug loadings or the use of ASD thin films with reduced thickness.

C.S., T.B.B., and G.G.Z.Z. thank various individuals from Drug Product Development, Research and Development, at AbbVie, Inc., for their helpful insights and discussions. The authors wish to thank Dr. Zhonghou Cai for the design of the humidity chamber for in situ XRF experiment and Mr. Evan Maxey for the contribution to Scheme 1. This research used resources of the Advanced Photon Source, a U.S. Department of Energy (DOE) Oﬃce of Science User Facility operated for the DOE Oﬃce of Science by Argonne National Laboratory under Contract No. DE-AC02-06CH11357.