How Bird Feathers Stick Together for Superior Flight Control 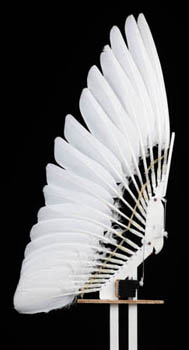 Among the variety of things that fly, from insects to airplanes, birds have the best flight control. This enhanced performance comes from birds’ unique ability to morph their wings mid-air, which they achieve by changing the overlap of their feathers. Scientists have suggested that this so-called “variable feather overlap” occurs through underlying mechanisms that involve friction or fastening, but these processes have been poorly understood. Now, using microscale analysis of bird wings at the U.S. Department of Energy’s Advanced Photon Source (APS), a team of researchers has discovered new insights into the mechanisms that give morphing wings their flight advantage. They found that bird wings could passively redistribute overlapping feather through elastic connective tissue and that feathers possess microstructures that slide and lock in a directional, probabilistic manner that keeps gaps from poking through. The team then built a biohybrid feathered robot and confirmed their observations under various turbulent conditions. These findings could help engineers design features for aircraft with improved flight control.

When birds flap their wings during flight, each movement is not just captivating, it also serves a valuable function for flight. By extending or flexing a wing, they’re also moving elastic tissue, which controls the position of the connected flight feathers.

To understand how the parts of the wing work together, scientists at Stanford University analyzed how feathers were positioned in the wing of a rock pigeon. (All experimental procedures were conducted on bird cadavers and were approved by Stanford’s Administrative Panel on Laboratory Animal Care.) They measured each feather angle with regard to the ulna bone and wrist angle in various poses, such as flexed, mid-tucked, and extended. The measurements revealed that feather angles had a linear relationship to wrist angle, suggesting that the feathers are underactuated, which in robotics means that the system has more degrees of freedom than actuators, and is a typical feature of efficient systems. In this case, the feathers’ underactuation is the result of the connective tissues’ elasticity, which passively redistributes overlapping feathers. 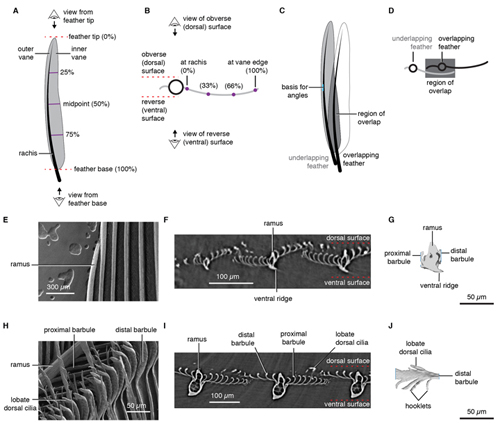 Next, the team investigated how neighboring pairs of feathers stick together to avoid gaps during wing extension. With help from researchers at the Smithsonian Institute and the California Council on Science and Technology, they visualized (Fig. 2) the microstructures that interlock the feathers using scanning electron microscopy (SEM) at the Smithsonian National Museum of Natural History and high-resolution computed-tomography (CT) x-ray imaging at the X-ray Science Division 2-BM beamline at the APS, an Office of Science user facility at Argonne National Laboratory.

The researchers found that feather microstructures, known as “lobate cilia,” latch onto as many as hundreds of hooked structures, called “rami,” in a probabilistic fashion. This property is also seen in bur fruit hooks, which led to the development of Velcro®. Additionally, the feather fastening is highly directional, as demonstrated by sticky gecko feet. This is the first time that both properties have been demonstrated by a single structure.

To test their findings about the feathers’ elastic-enabled redistribution and directional fastening, the team built a biohybrid aerial robot equipped with underactuated pigeon flight feathers (Fig. 1). They confirmed in outdoor and wind tunnel experiments, under low and high turbulence, that both features were crucial during flight: the directional fastening kept the feathers from separating and the elastic underactuation moved unlocked feather into place.

The researchers propose that the observed fastening mechanism likely appears across bird species based on three pieces of evidence. One, the lobate cilia structure is found in many species. Two, the team discovered fastening forces in more than a dozen bird species, including merlins and ospreys. However, this excludes silent flyers such as barn owls, and high-resolution CT scans of owl feathers confirmed that they lack the telltale lobate cilia and rami for fastening. And finally, by measuring the fastening forces, they found that the forces ended up being a similar fraction of body weight for a range of body sizes.    ― Tien Nguyen

This project was supported by Air Force Office of Scientific Research (AFOSR) Basic Research Initiative award number FA9550-16-1-0182 and AFOSR Defense Enterprise Science Initiative award number FA9550-18-1-0525, with special thanks to B. L. Lee, F. A. Leve, and J. L. Cambier leading the program. T.J.F. was supported by National Science Foundation (NSF) PRFB 1523857. E.C. and L.J. were supported by a NSF GRFP fellowship, A.K.S. by a NDSEG fellowship, and D.L. by a NSF CAREER award 1552419. This research used resources of the Advanced Photon Source, a U.S. Department of Energy (DOE) Ofﬁce of Science User Facility operated for the DOE Ofﬁce of Science by Argonne National Laboratory under Contract No. DE-AC02-06CH11357.