A Therapeutic Target for Parkinson’s Disease 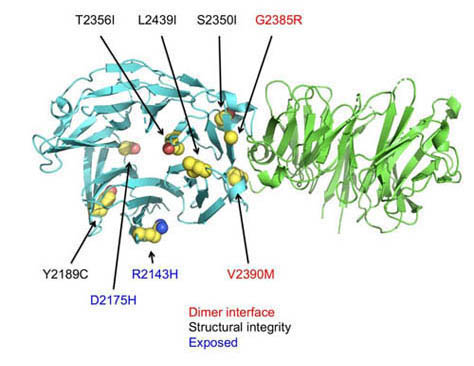 Parkinson's disease (PD) is a neurodegenerative disorder that affects about 7 million people worldwide, including 1 million in the U.S. Though the causes of PD remain unknown, the leucine-rich repeat kinase 2 (LRRK2) protein is a known contributor to both sporadic and inherited disease. Importantly, the C-terminal of LRRK2, the WD40 domain, is required for LRRK2 neurotoxicity. To better understand the biological functions of LRRK2 and the impact that PD-associated mutations have on protein function, researchers used anomalous diffraction phasing at the U.S. Department of Energy’s Advanced Photon Source (APS) to solve the structure of the WD40 domain of human LRRK2 to a resolution of 2.6 angstroms. This structure allowed researchers to map known disease-associated mutations and to use complimentary biochemical analysis to explore the functional effects of pathogenic mutations on LRRK2 dimerization. Together, these findings provide support for development of LRRK2-targeting therapies for PD.

There are a number of genetic and environmental factors associated with development of Parkinson’s disease. For example, the incidence of PD increases with age, and there are a number of mutations within a range of genes that have been associated with PD. Though mutations in some of these genes are present in a small subset of PD patients, like those responsible for familial PD, others, like the protein LRRK2, are major contributors to hereditary and sporadic PD.

Though the exact function of LRRK2 is unclear, as is the exact nature of its contribution to PD, it is known that the C-terminal WD40 structural domain is required for LRRK2-indiced neurotoxicity. In the current work, the researchers from Harvard Medical School, Boston Children’s Hospital, the University of Dundee (UK), and the University of California, San Diego, crystalized WD40 and used x-ray diffraction data obtained at the Northeastern Collaborative Access Team 24-ID-C beamline at the APS to build a model of the protein to a resolution of 2.6 Å. (The APS is an Office of Science user facility at Argonne National Laboratory.) With the structure of WD40 in hand, the researchers were able to map mutations known to contribute to PD onto the three-dimensional structure (Fig. 1). Using complementary biochemical analysis, the team confirmed that LRRK2 exists in solution as a concentration-dependent dimer, resolving ambiguity in the field surrounding the functional state of the protein. Importantly, several mutations at the dimerization interface were shown to increase LRRK2 activity, lending support to the hypothesis that LRRK2 pathogenicity in PD is due to hyperactivation of the protein.

That PD mutations contribute to hyperactivation is an important finding, as this supports LRRK2 as a drug target for novel anti-PD therapies. Future research will be aimed at a deeper understanding of the complexities of LRRK2 biology, including the factors which influence the imperfect correlation between LRRK2 dimerization and activity, and the effect of pathogenic mutations on the activity of the full-length protein.  — Emma Nichols

This work was supported by The Michael J. Fox Foundation for Parkinson’s Research [Grants 11211 (to H.W.) and 6986 (to D.R.A.)] and by the Medical Research Council [Grant MC_UU_12016/2 (to D.R.A.)]. The NE-CAT beamlines are funded by the National Institute of General Medical Sciences from National Institutes of Health (NIH) Grant P30 GM124165. The Pilatus 6M detector on the 24-ID-C beamline is funded by a NIH-Office of Research Infrastructure Programs High-End Instrumentation Grant S10 RR029205. This research used resources of the Advanced Photon Source, a U.S. Department of Energy (DOE) Office of Science User Facility operated for the DOE Office of Science by Argonne National Laboratory under Contract DE-AC02-06CH11357.