The Future is Pink for Molecular Movies 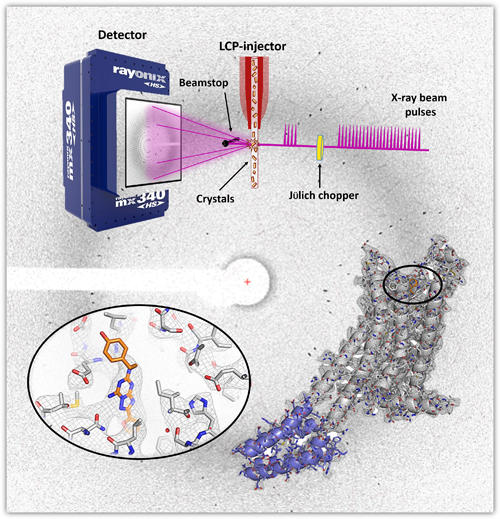 For many years, investigators who decipher the mysteries of protein structure have sought a way to move from the static environment of protein crystals to a more dynamic method for determining the structures of proteins in action. Protein conformational changes have been approximated by taking “snapshots” of protein crystals with and without different substrates or inhibitors and then comparing the two structures. But what if it was possible to capture many snapshots of different small crystals in random orientations at different time points and piece together the data to see time-resolved changes? This could provide data about a protein’s structure and its movement through possible conformations, creating a series of images that could be turned into a kind of movie. Now, the first proof-of-concept experiments using high-viscosity sample injection combined with pink-beam serial crystallography (SX) have offered a glimpse into the possibilities of molecular moving pictures.

The work builds on recent technological breakthroughs in structural biology. These include advances in the development of high-brightness photon sources (e.g., x-ray free-electron lasers [XFELs]), fast read-out detectors, and novel sample delivery methods (e.g., high-viscosity injectors) that have solved technical challenges in the field. For example, using XFELs to collect data on thousands of nano- or microcrystals in serial femto-second crystallography (SFX) experiments overcomes problems associated with the need to generate large crystals for structure determination and, because it uses ultrashort duration XFEL pulses, it outruns the radiation damage associated with long x-ray radiation exposures.

However, there are only five XFEL facilities worldwide, limiting investigator access to this breakthrough technology. Recently, investigators have been testing the idea that SX experiments using polychromatic x-ray beam radiation (the so-called “pink beam”) generated from third-generation synchrotron sources, such as APS, could overcome this limitation. Pink-beam radiation is suitable for these experiments because it provides a higher photon flux (100 times higher than monochromatic beams) that allows detection of much shorter time scales than standard synchrotron beams.

The research team in this study, from Arizona State University, Argonne National Laboratory, The University of Chicago, and the University of Southern California hypothesized that combining this high-brightness photon source with the latest high-viscosity injection technology to deliver thousands of nano- or microcrystals to the beam could generate a complete dataset in a shorter time with a smaller sample volume, providing time-resolved data without damaging radiation exposures (Fig. 1). The work demonstrates the feasibility of using a synchrotron radiation source to capture time-resolved protein structure data using this novel system.

To test their hypothesis, the team chose two proteins for which structures have already been determined: an enzyme, proteinase K (PK), and a G-protein coupled receptor, the human A2A adenosine receptor (A2AAR). They were able to solve the structure of PK with the new method at 1.8-Å resolution using the BioCARS 14-ID-B x-ray beamline at the APS. (The APS is an Office of Science user facility at Argonne National Laboratory.)  The crystals were 10-15 μm in size and were exposed to about 460 picoseconds (ps) of radiation for each crystal, about 30 kilogray (kGy) of radiation. The structure aligned well with previous structures solved through conventional methods and another recent pink-beam SX structure solved at BioCARS.  When they tested the structure for radiation damage by evaluating the integrity of two disulfide bonds in the structure that are particularly susceptible to radiation damage, they found no site-specific radiation damage.

The structure for A2AAR was a bit more complicated because the crystals were very small (~5 μm) and only weak and sparse diffraction data of low resolution were observed under the data collection conditions used for PK. Therefore, the team increased the consecutive pulses of pink-beam radiation to 24 (from 4 for PK, 3.5-μs total exposure) and obtained data that enabled them to resolve the structure at 4.2 Å with a total radiation dose of 210 kGy per crystal. Although some alterations to the standard Laue data processing strategy were required due to the low resolution of the data, the final data set was of high quality and the structure aligned well with previous structures (Fig. 1). Finally, a check for radiation damage also revealed no site-specific radiation damage at the four disulfide bonds in A2AAR.

With this positive proof-of-concept experiment for the use of pink-beam radiation with high viscosity injection of the sample, the researchers believe that molecular movies may soon be coming to a theater near you.  ― Sandy Field