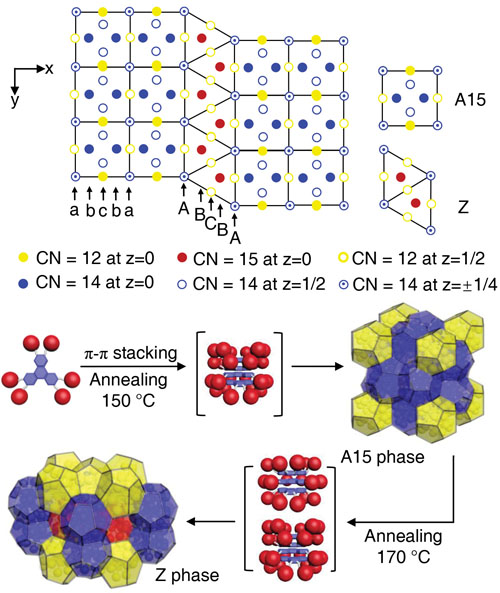 Deep down on the inside, at the level of atoms, most solid pieces of matter are crystalline. Pure metals like iron often have simple crystal structures, while others can be more complex. Some are even quasicrystals, which have their atoms in complicated, crystal-like patterns that never quite repeat. Studies of the structure of crystalline materials show that many factors influence that atomic geometry, but the size and shape of an atom or molecule is the most important. And that can help solve real-world problems. Famously, British engineer Lord Kelvin in 1887 asked how space could be most efficiently partitioned into cells of equal volume with the least area of surface between them. Kelvin’s problem has never been definitively solved, but in 1994 mathematicians demonstrated that a crystal structure, the Frank Kasper A15 phase, was more efficient than any previous solution. Frank Kasper structures are ordered approximations of quasicrystals. The A15 phase was the inspiration for the Beijing National Aquatics Center water cube for the 2008 Olympics because it allowed for the construction of a space with cells of equal volume using the least amount of material. Another Frank Kasper structure, the Z phase, could theoretically construct the same space with even less material—if the cells are allowed to be unequal. Now, a team of scientists has used the U.S. Department of Energy’s Advanced Photon Source (APS) to show that the Z phase can exist in a soft, self-assembling material. Their work provides insight into potential special properties of Z phase matter, and shows how other, more complex Frank Kasper phases could be constructed.

In order to build a material with a Frank Kasper Z phase structure, researchers from the University of Akron in Ohio, the South China Institute of Technology, Northern Illinois University, The University of Tokyo (Japan), and the Riken Center for Emergent Matter Science (Japan) had to build a nano-sized, multipart molecule. They attached six identical polyhedral silesquioxane cages (six-sided polygons made of silicon and oxygen) to a central triphenylene core using covalent links with adjustable lengths. By tuning the lengths of the links just right, the researchers could persuade the complex molecules to self-assemble into spherical motifs, which then squish together to form polyhedra in Frank Kasper patterns (Fig. 1).

The resulting material, a white powdery solid, initially arranged itself in a Frank Kasper A15 phase. The team then annealed the material at 170 ° Celsius, and the material went through a structural phase transition to become a Frank Kasper Z phase. The researchers used ultraviolet spectroscopy to check that the phase transition occurred. But to really know for sure, the team, with colleagues from Argonne National Laboratory, imaged the atomic arrangement with small- and wide-angle x-ray scattering at X-ray Science Division x-ray beamlines 12-ID-B and 12-ID-C at the APS, an Office of Science user facility at Argonne.

X-ray scattering creates patterns as the x-rays bounce off atoms in a repeating arrangement in a crystalline solid. The regularly spaced atoms in the crystal can be described as being in planes; the patterns and difference in x-ray scatters between the planes can differentiate even between solids with the same chemical composition but different phase arrangements. The SAXS analysis clearly showed the difference between the Frank Kasper A15 formation and the Frank Kaspar Z.

The high energy and resolution of the APS x-ray beams make it possible to characterize different phases of a complex material clearly and efficiently. Beamline 12-ID-B contains two detectors to detect a wide range of scattered x-rays, and 12-ID-C can change the wavelength of the incoming x-rays by adjusting the source energies. Together, these Sector 12 beamlines allowed the researchers to study many different length scales in the material, and completely characterize the atomic arrangement of the structures.

Now that the researchers have shown a Frank Kasper Z phase in a soft material, they have the tools to assemble all 27 possible Frank Kaspar phases. In their future work, they plan to design other self-assembling molecules to demonstrate other unconventional structures in soft matter, such as bicontinuous P phase and the icosahedral quasicrystal phase.  ― Kim Krieger

This work was supported by the National Science Foundation (DMR-1408872 to S.Z.D.C. and CHE-1808115 to C.W.) and the Program for Guangdong introducing Innovative and Entrepreneurial Teams (no. 2016ZT06C322). T. L. is grateful to the support by the Northern Illinois University start-up funds. This research used resources of the Advanced Photon Source, a U.S. Department of Energy (DOE) Office of Science User Facility operated for the DOE Office of Science by Argonne National Laboratory under contract no. DE-AC02-06CH11357.