Uncovering the Interfacial Behavior of Hematite Far from Equilibrium 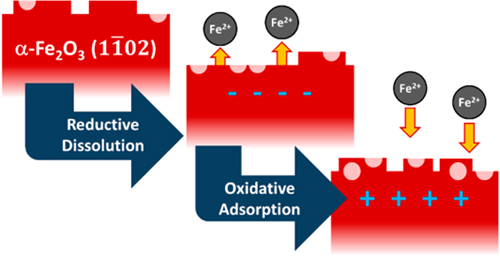 Iron oxides and oxyhydroxides come in dozens of distinct varieties and are involved in many biological, geological and technological processes. They serve as the sources of catalytic activity for a variety of enzymes and assist micro-organisms in producing methane from decomposing organic matter. They further serve to bind and sequester a variety of toxic and heavy metals. While these processes have existed since the dawn of time, humans have recently found uses for their properties in everything from cosmetics to biological sensing to drug delivery. But, given how recent these applications are, it follows that many of the reaction pathways involving iron oxides are not fully understood. Of particular interest is the working of hematite, Fe2O3, an iron oxide mineral commonly found in rocks and ores around the world—even in rocks on Mars. In hematite, the flux of Fe2+/Fe3+ between aqueous ions and hematite crystals have been studied extensively but within a relatively narrow window of environmental conditions. Researchers aimed to crack this window open a bit further by using the U.S. Department of Energy’s Advanced Photon Source (APS) to study the exchange between Fe2+/Fe3+ on hematite surfaces at low pH, a condition that will more closely imitate what might occur in some natural and technological settings. The details that they uncovered and published in The Journal of Physical Chemistry shed light on the Fe2+/Fe3+ redox cycle and provide a better understanding of the complex geochemical behaviors of iron (oxyhydr)oxides.

A naturally-conductive hematite crystal from Brazil was cut to a uniform shape and the surface cleaned and polished to prevent any unwanted interactions from contaminants. Crystal truncation rod analysis (CTR) was used to resolve the crystal-solution interface, so that coordinated and free iron could be distinguished and monitored. CTR is a surface-sensitive diffraction technique.  By using a computer program to fit an atomic-scale structure model to the data, scientists can determine the locations of atoms at crystal surfaces and interfaces with exquisite precision. The researchers, from Pacific Northwest National Laboratory and colleagues from The University of Chicago, were also able to apply varying electric potentials across the crystal surface using a novel electrochemical cell. These interface-sensitive x-ray scattering experiments were conducted at the GeoSoilEnviro Center for Advanced Radiation Sources beamline 13-ID-C at the APS (the APS is an Office of Science user facility at Argonne). 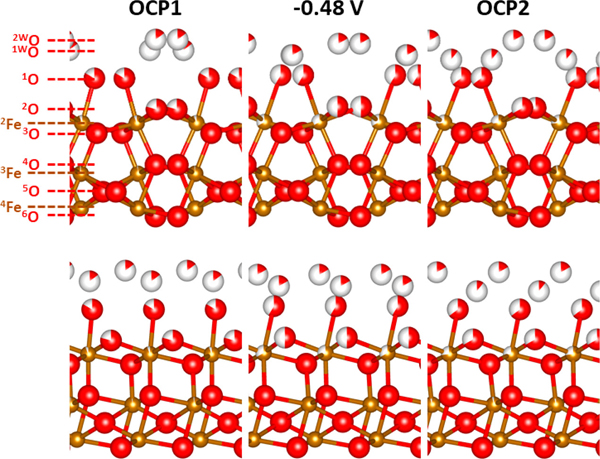 The researchers’ CTR experiments confirmed that a noticeable change on the surface of the hematite occurs when the pH is shifted downward and potential is applied (Fig. 2). When the surface electric potential was adjusted toward a cathodic bias,  high energy interfacial atoms dissolve, producing a surface similar to the one formed by annealing at high temperatures in air, resulting in a very smooth crystal surface. Turning off the bias resulted in disordered reprecipitation of iron. This partial re-adsorption of atoms onto the crystal surface appeared to increase the roughness of the surface. Figure 1 displays the researchers’ proposed mechanism for iron oxide surfaces under fluctuating electrochemical conditions. The illustration shows the dissolution and reprecipitation of iron as cathodic bias is applied and removed.

In summary, this research team successfully made atomic-scale, in situ observations of the unique mineral-electrolyte interfaces of hematite at conditions far from equilibrium, which can be quite different from those that take place at equilibrium. The CTR experiments enhanced the researchers’ molecular-scale view of the structures at the electrode-electrolyte interfaces. This suite of experiments serves as a compelling case study in how CTR measurements can complement and confirm the highly detailed structural and chemical data offered by molecular dynamics simulations.  ― Alicia Surrao

This material is based upon work supported by the U.S. Department of Energy (DOE) Oﬃce of Science-Basic Energy Sciences, Chemical Sciences, Geosciences, and Biosciences Division through its Geosciences program at Paciﬁc Northwest National Laboratory (PNNL). PNNL is a multiprogram national laboratory operated by Battelle Memorial Institute under Contract No. DE-AC05-76RL01830 for the U.S. DOE. The research was performed in part using the Cascade supercomputer at the Environmental and Molecular Sciences Laboratory (EMSL), a DOE Oﬃce of Science User Facility sponsored by the Oﬃce of Biological and Environmental Research. GeoSoilEnviroCARS is supported by the National Science Foundation−Earth Sciences (Grant EAR-1634415) and DOE−Geosciences (Grant DE-FG02-94ER14466). This research used resources of the Advanced Photon Source, a U.S. Department of Energy (DOE) Office of Science User Facility operated for the DOE Office of Science by Argonne National Laboratory under Contract No. DE-AC02-06CH11357.