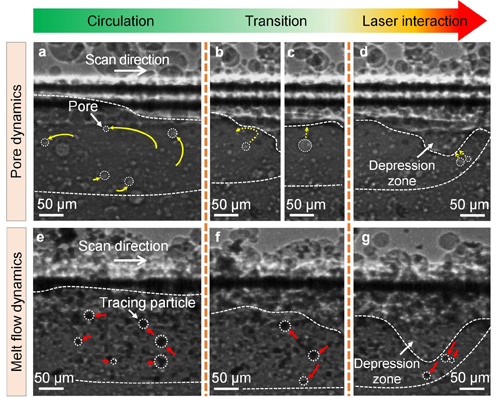 A major unwanted byproduct of the prominent additive manufacturing (AM) technique of laser powder bed fusion (LPBF) of metals is porosity.  The presence of myriad pores of varying sizes in the finished metal pieces seriously compromises their strength and durability.  So understanding precisely what creates pores during the LPBF process is critical to finding ways to reduce and eliminate them. Using advanced high-speed hard x-ray imaging techniques at the U.S. Department of Energy’s (DOE’s) Advanced Photon Source (APS) at Argonne National Laboratory, a team of researchers has penetrated the dynamics and mechanisms of pore formation and elimination during LPBF fabrication.  The team expects that the methods demonstrated in this work could be perfected and extended not just in LPBF printing but across other AM techniques and other fabrication technologies. Their work was published in Nature Communications.

One of the challenging aspects of understanding pore formation in LPBF is that various factors can be responsible, either individually or acting in combination, including pore transfer from feedstock, vaporization of volatile elements, and other causes.  The buoyant forces that normally help to eliminate pores from other liquids are not effective in the LPBF melt pool because of high drag forces, so post-processing techniques, an imperfect solution at best, are usually the only option to eliminate pores in finished pieces.  A better option would be to prevent or at least reduce pores during printing, which requires a deeper and more detailed understanding of how they form.

Previous efforts to achieve such understanding have been hampered by the high velocities and tiny sizes of pores in the LPBF melt pool, along with the opacity of the metallic substances involved.  The experiment team from the Missouri University of Science and Technology, the National University of Singapore, Argonne, and the U.S. DOE Kansas City National Security Campus overcame those obstacles by using the extreme brightness x-rays available at the X-ray Science Division 32-ID-B beamline of the APS, an Office of Science user facility, which enabled high-speed, high-resolution, in situ imaging in real time during the actual LPBF process.  The team studied samples of AlSi10Mg alloys to first characterize pore behavior and then to examine possible elimination techniques.

The high speed and resolution attainable thanks to the APS x-rays allowed the details of individual pore movement to be seen (Fig.1).  This revealed the variations in pore dynamics in different regions of the melt pool, which the experimenters delineated as (1) a laser interaction domain nearest to the laser beam, (2) a circulation domain farther away from the beam in which pores circulated at various speeds, and (3) a transition domain between the two, where some pores simply circulated and others moved toward the melt pool surface and escaped.

The researchers first considered the pore movements they observed in these domains in light of the mechanisms usually reported in the literature, chiefly buoyancy and melt-induced drag.  They found that at these pore sizes, the drag force is far greater than the buoyant force, preventing pores from escaping at the pool surface in the circulation domain.  However, even with the high melt flow velocity in the laser interaction domain, pores tend to move in a direction almost perpendicular to the melt flow direction and quickly escape, despite the influence of buoyant and drag forces.

The research team next investigated how the thermocapillary force could be used to eliminate pores in the midst of the LPBF process, experimenting on both AlSi10Mg and Ti6Al4V to demonstrate effectiveness over multiple alloys.  By inducing specific thermocapillary force through laser rescanning at the proper parameters, involving a temperature gradient high enough to overcome the melt induced drag force over a large enough domain, the experimenters were able to achieve effective pore elimination in the samples.  ― Mark Wolverton

The authors would like to thank Alex Deriy at the APS for his help on the beamline experiments. This work is funded by the DOE’s Kansas City National Security Campus Managed by Honeywell Federal Manufacturing & Technologies (FM&T), National Science Foundation, Intelligent Systems Center at Missouri S&T, and partially by Laboratory Directed Research and Development from Argonne National Laboratory, provided by the Director, Ofﬁce of Science, of the U.S. DOE under Contract No. DE-AC02-06CH11357. W.Y. would like to thank the support from Singapore Ministry of Education Academic Research Fund Tier 1. This publication has been authored by Honeywell Federal Manufacturing & Technologies under Contract No. DE-NA0002839 with the U.S. DOE. This research used resources of the Advanced Photon Source, a U.S. DOE Ofﬁce of Science User Facility operated for the DOE Ofﬁce of Science by Argonne National Laboratory under Contract No. DE-AC02-06CH11357.