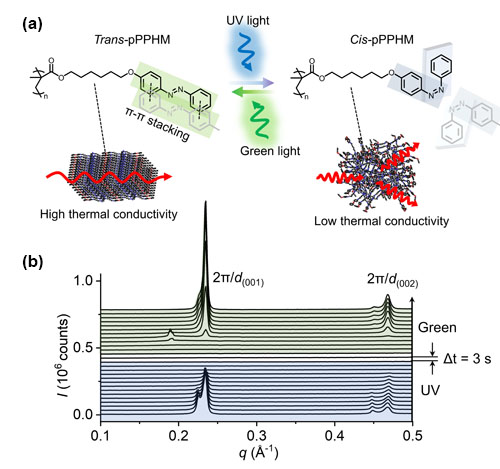 Plastic materials that can be switched from their normal character as heat insulating materials to ones that can conduct heat well by simply turning the lights on could have a wide range of applications in engineering. Applications might be found in carrying and releasing drug molecules to disease sites in the body, or controlling the way in which components in a device stick together. Or perhaps more obviously, in allowing heat to be channeled through a building or vehicle in a controlled way without the need for louvers and fans. Toward that end, researchers from the University of Illinois at Urbana–Champaign, Argonne National Laboratory, and the Air Force Research Laboratory used the U.S. Department of Energy’s Advanced Photon Source (APS) to investigate a plastic, polymeric material with a view to modifying it to change properties reversibly when light shines on it.

The properties of countless materials can be changed by heating them, adding acid or alkali, or in the case of so-called “photoresponsive materials,” by bathing them in light. Such materials have found utility in diverse areas of modern technology for controlled drug delivery, in diagnostic and environmental sensors, in self-healing devices, and in the development of artificial muscles for robotics and other types of actuators. One aspect of such control that has been a prime target for research is the development of materials that can be switched from heat insulators to conductors and back again with a simple external stimulus.

The research team modified their polymer with organic chemical groups containing a nitrogen atom known as azobenzene groups. These units exist in a flat, trans, form and a non-planar, cis, form. When they illuminate their azopolymer with ultraviolet light, the azobenzene side chains in the trans state flip to the cis state. This change in conformation is reversed by bathing the material with green light to reconfigure the azobenzenes once more to the trans state.

Critically, in the planar, or trans, form, the azobenzene groups stack together; this means that the polymer is quite solid; it is a semi-crystalline thermal conductor. However, when ultraviolet light shines on the material, the planar trans groups, in flipping to the non-planar cis state, can no longer stack neatly together. This makes the polymer chains lose their crystalline form and enter a liquid state. It is in this liquid state that the transport of heat is suppressed.

The material thus switches from a thermal conductor to a thermal insulator. The team's experiments show that the difference in conductivity between the two states is large ― a more than threefold change. The transition takes place at room temperature within a matter of seconds. Green illumination causes recrystallization to take place and the azopolymer reverts to its solid, thermally conducting condition.

Thus, the team has demonstrated a fast transition induced by light; this represents powerful control of the thermophysical properties of a polymer.

Sample preparation and characterization were performed at the Materials Research Laboratory and the Beckman Institute for Science and Technology at the University of Illinois at Urbana–Champaign. This work was supported by the National Science Foundation (NSF) Engineering Research Center for Power Optimization of Electro-Thermal Systems, with Cooperative Agreement EEC-1449548, and Air Force Office of Scientific Research Grant FA9550-16-1-0017. This work was also supported by NSF Grant DMR 1554435. This research used resources of the Advanced Photon Source, a U.S. Department of Energy (DOE) Office of Science User Facility operated for the DOE Office of Science by Argonne National Laboratory under Contract DE-AC02-06CH11357.