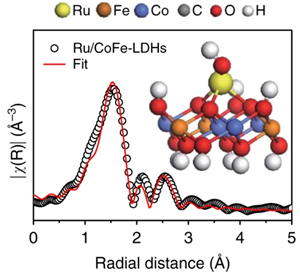 A highly active and stable single atomic ruthenium (Ru) catalyst has been engineered to exhibit lower overpotential and better stability than commercial benchmark RuO2 catalyst. The mechanism of its record-high activity has been studied using high-brightness synchrotron x-rays by a research team carrying out structural and valence characterization of the material at the U.S. Department of Energy’s Advanced Photon Source (APS) at Argonne National Laboratory. This work, published in Nature Communications, has provided a new guideline for materials design and also demonstrated potential applications in the industrialization of cost-effective and efficient energy conversion devices.

High-energy, dense, and environmentally benign hydrogen has attracted much attention as a new sustainable energy resource. The water electrolyzer, an electrochemical energy conversion device to split water, is one of the promising methods for producing hydrogen. However, it requires stable and highly active electrocatalysts, since the key half-reaction, oxygen evolution reaction (OER), suffers from sluggish kinetics. This is because total four-electron transfer is needed to convert OH- in water to oxygen (O2) in this reaction, thus slowing down the process compared to fast and effective one-electron transfer reaction (e.g., H+ to Hatom). The research team in this work, led by Beijing University of Chemical Technology and Oregon State University, has developed a single-atom Ru catalyst by using the transition metal layered double hydroxide (LDH) as support to fix the single Ru atom and act as co-active sites. This method largely reduces the usage of precious metal (Ru) and relies on the earth-abundant materials, which not only lowers the cost of catalysts but also improves the energy conversion efficiency.

Most single atom catalysts are unstable and so can form significant agglomerates under reaction conditions. This restructuring can be caused by various conditions and lead to less than desirable catalytic performance. However, the new Ru single-atom catalyst developed by the team shows opposite properties: super stable and highly efficient. By using the in situ and operando x-ray absorption spectroscopy (XAS) at the DuPont-Northwestern-Dow Collaborative Access Team (DND-CAT) x-ray beamline 5-BM-D at the APS, the team was able to find out why by the direct observation of the structure and oxidization state change of each element in the complex catalyst (Fig. 1) under OER condition. (The APS is an Office of Science user facility at Argonne National Laboratory.) Ex situ XAS spectra were collected at the 1W1B end station of the Beijing Synchrotron Radiation Facility.

The team correlated the catalytic performance with the oxidization state and catalyst structures determined from the in-situ XAS . Comparing with several different Ru catalysts that are anchored on different LDH substrates, the LDH with cobalt (Co) and iron (Fe) elements show the lowest OER overpotential (198 mV at 10 mA/cm2). This extremely positive catalytic performance was the result of the strong synergetic electron coupling between Ru and CoFe atoms, which was also confirmed by theoretical calculations. The reversible structure change of Ru and irreversible structure change of CoFe suggests that the Ru atoms is the active site for OER, and the shorter Ru-O-Metal bonding formation under reaction condition is the key to further stabilize the Ru single atom. This special arrangement confines the Ru oxidization state to be lower than 4+ (Ru4+), which explains the stability mechanism of the engineered catalyst.

Besides multiple sources that sponsored this work, authors especially thank the instrumental and technical support from DND-CAT, which  is supported by Northwestern University, E.I. DuPont de Nemours & Co., and The Dow Chemical Company. This research used resources of the Advanced Photon Source, a U.S. Department of Energy (DOE) Office of Science User Facility operated for the DOE Office of Science by Argonne National Laboratory under Contract No. DE-AC02-06CH11357.