Uncovering a Weakness in a Top-Three Antibiotic Resistance Threat 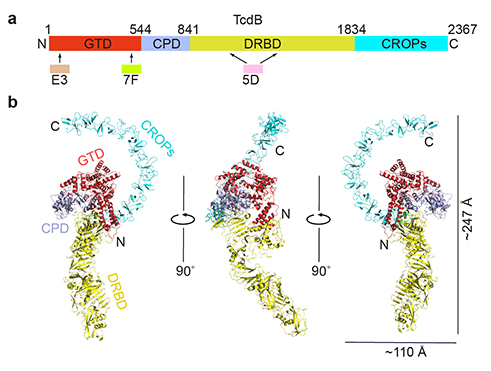 The original University of California, Irvine, School of Medicine press release can be read here.

A new study, led by researchers from the University of California, Irvine (UCI), and carried out at the U.S. Department of Energy’s Advanced Photon Source (APS) at Argonne National Laboratory, uncovered the long-sought-after, three-dimensional structure of a toxin primarily responsible for devastating Clostridium difficile infection (CDI). Published in Nature Structural & Molecular Biology, the study sheds light on the weaknesses of TcdB, one of the toxins secreted by the Clostridium difficile (C. diff) bacteria and the main cause of CDI.

The team determined the molecular structure of the toxin by collecting macromolecular x-ray diffraction data at the Northeastern Collaborative Access Team 24-ID-C beamline at the APS, and at beamline BL9-2 of the at Stanford Synchrotron Radiation Lightsource (SSRL). Both the APS and SSRL are Office of Science user facilities. Small-angle x-ray scattering experiments were performed at SSRL beamline 4-2.

“This is the first time we could directly see the 3D structure of the gigantic TcdB holotoxin at a near atomic resolution,” said Rongsheng Jin, Ph.D., a professor in the Department of Physiology & Biophysics at UCI’s School of Medicine and the senior author in the study. “Interestingly, this toxin shapes like a question mark when viewed from a certain angle, and it has been a major question for us as we seek ways to fight the toxin and CDI.”

Also included in the study, the team demonstrated how three antibodies could neutralize TcdB, revealing intrinsic vulnerabilities of the TcdB toxin that could be exploited to develop new therapeutics and vaccines for the treatment of CDI.

C. diff is an opportunistic pathogen that establishes in the colon when the gut microbiota are disrupted, often seen in severely ill or elderly patients in hospitals or in long-term care facilities.  CDI has become the most common cause of antibiotic-associated diarrhea and gastroenteritis-associated death in developed countries, accounting for half-million cases and 29,000 deaths annually in the US. It is classified as one of the top three “urgent threats” by CDC. The current standard of care for CDI involves treatments using broad spectrum antibiotics that reduce the level of C. diff bacteria, but also kill the good bacteria in the gut and disrupt the normal gut microbiome. This approach often leads to frequent disease recurrence (up to 35%).

Recently, the Food and Drug Administration (FDA) issued a warning about an investigational fecal microbiota for transplantation (FMT) procedure for CDI treatment following the death of patient in a clinical trial.  In another action, the FDA approved Bezlotoxumab, a TcdB-neutralizing human monoclonal antibody, as a prevention against recurrent infection.

“There remains a desperate need for more potent and cost-effective therapies for CDI,” said Jin. “The good news is, the 3D structure of TcdB we have identified literally provides a blueprint for the development of next-generation vaccines and therapeutics that have enhanced potency and broad-reactivity across different C. diff strains.”

Already the UCI team is working on a novel vaccine based on the new structure.  Early studies show promising results, which Jin hopes to publish soon.  In the meantime, The Regents of the University of California has filed a patent on their work.