When Kinetics and Thermodynamics Should Play Together 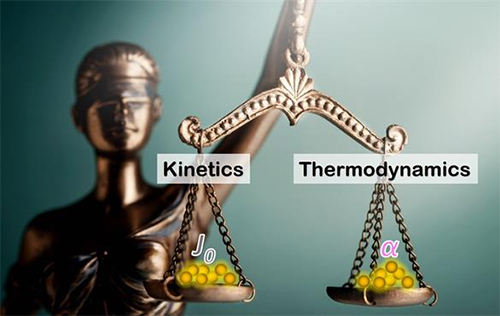 The original McKelvey School of Engineering at Washington University in St. Louis press release by Brandie Jefferson can be read here.

The formation of calcium carbonate (CaCO3) in water has ramifications for everything from food and energy production to human health and the availability of drinkable water. But in the context of today's environment, simply studying how calcium carbonate forms in pure water isn't helpful. Researchers at Washington University in St. Louis's McKelvey School of Engineering have pioneered cutting-edge methods to study the formation of calcium carbonate in saline water. They carried out a large part of their in situ experimental investigations at the U.S. Department of Energy’s Advanced Photon Source (APS). Their results, published in the Journal of Physical Chemistry C, suggest that, without considering kinetic factors, we may have been overestimating how fast calcium carbonate forms in saline environments.

"Now more than ever, it is important to understand how minerals form under highly saline conditions," said Young-Shin Jun, professor in the Department of Energy, Environmental & Chemical Engineering at the McKelvey School of Engineering at Washington University in St. Louis. As urban areas spread, more and more fresh water is lost to the oceans through runoff.  An increased production of briny water is also being seen in industrial and energy harvesting processes, such as desalination and hydraulic fracturing.

Jun's group began with a philosophical question: At what point in the coming together of calcium and carbonate ions does calcium carbonate actually "form"?

"People often casually say 'formation' when they refer to the 'growth' of solids, but formation actually starts earlier, at the nucleation stage," Jun said. "Nucleation begins at the moment when all of the precursor parts have fallen into place, reaching a critical mass that creates a nucleus that is big enough and stable enough to continue to grow as calcium carbonate solids."

Nucleation is, unsurprisingly, difficult to observe because it happens at nanoscale. Hence, this process is often simply assumed to have taken place. Rather than paying attention to nucleation as a separate phenomenon, researchers have traditionally put more effort into understanding growth.

Working at the X-ray Science Division 12-ID-B and 12-ID-C,D x-ray beamlines at the APS, an Office of Science user facility at Argonne National Laboratory, Jun’s group employed the powerful synchrotron-based x-ray scattering method known as grazing incidence small angle x-ray scattering (GISAXS). They created unique environmental reaction cells and observed real time nucleation events in aqueous environments. Furthermore, using the high-brightness x-rays from the APS, they could see the moment of nucleation, which allowed them to closely compare rates of nucleation in waters of different salinities.

The concentration of salt in water varies widely; seawater has about 35 grams of salt per liter, while water used in hydraulic fracturing (or fracking) contains even higher concentrations of salts. However, without considering salinity, most studies have explored how the mineral interacts with the substrate on which it grows; for instance, what is a water pipe or a membrane made of, and how does that material affect the formation of calcium scales?

But those aren't the only important interactions.

"We need to add salinity into this matrix," Jun said. "How does saline water chemistry affect nucleation? It doesn't happen in a vacuum."

An important relationship in determining the likelihood of nucleation is the balance between the thermodynamics and kinetics of the particular system. Thermodynamically, a specific amount of energy is required to drive nucleation; if that energy (known as the interfacial energy) is sufficiently low, then nucleation can spontaneously occur.

Kinetics refers to the motions of the sub- and nanometer-sized building blocks (precursors) that may or may not reach that critical mass (called the critical nucleus size) and go on to grow as calcium carbonate. As with nucleation itself, observing the kinetics of these particles is difficult. Historically, the kinetic factor was considered to be less important than the thermodynamic parameter, and was assumed to be a constant. But is this true even for highly saline water?

"People have thought that kinetics is not important because it should be the same, no matter what," Jun said. But using GISAXS, Jun and her former doctoral student Qingyun Li, now at Stanford University, were able to quantitatively describe the relationship between the kinetic factor (J0) and thermodynamic parameter (interfacial energy, α) of calcium carbonate nucleation, using quartz as the substrate. Critically, they were able to test it in water with varying salinities.

It turns out that in water with high salinity, interfacial energy is lower than in pure water, which means nucleation can happen easier. However, the kinetic factor — related to how fast the building blocks are being delivered — is slow.

"If we account only for thermodynamics when we predict the system, we're overestimating the rate of nucleation. The impact of kinetic factors should be included," Jun said.

This impact is important for a host of reasons beyond simply having a better basic understanding of mineral formation.

"Thus, to design sustainable water and energy production systems, we urgently need a good understanding of how highly saline water can affect calcium carbonate nucleation, which can reduce their process efficiencies," Jun said.

"It is an exciting finding. By changing the kinetics and thermodynamics, we can design a surface to prevent nucleation. By knowing when and where the nucleation happens, we can prevent or reduce it, extending the lifetime of pipelines or water purification membranes.

"Conversely, we can also increase nucleation where we need it, such as in geologic CO2 storage," she said. "This basic understanding gives us power and control."

This work is supported by the Center for Nanoscale Control of Geologic CO2, an Energy Frontier Research Center funded by the U.S. Department of Energy (DOE_ Oﬃce of Science-Basic Energy Sciences under Award Number DE-AC02-05CH11231. We acknowledge Drs. Byeongdu Lee, Xiaobing Zuo, and Seonke Seifert for helping us collect GISAXS data at sector 12-ID-B and 12-ID-C at the APS and acknowledge Dr. Yongman Kim for helping to collect water surface tension data. This research used resources of the Advanced Photon Source, a U.S. Department of Energy (DOE) Office of Science User Facility operated for the DOE Office of Science by Argonne National Laboratory under Contract No. DE-AC02-06CH11357.