Going Under the Surface of Laser-Induced Spattering 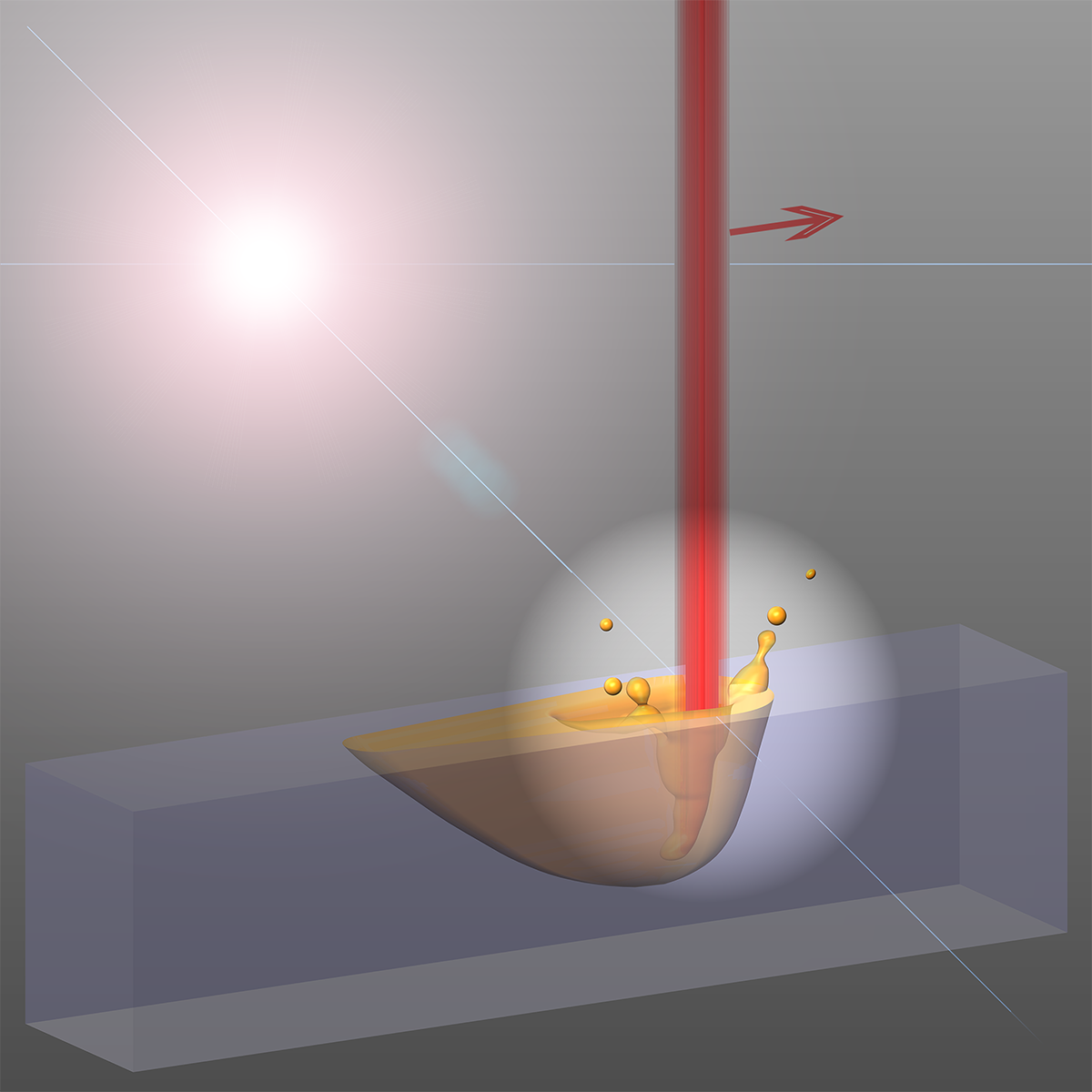 Researchers have now elucidated in detail the laser-induced spattering behavior in the common titanium alloy Ti-6Al-4V using the U.S. Department of Energy’s Advanced Photon Source (APS).  Combining image analysis with numerical simulations, they were, for the first time, able to connect the visible spattering above the metal surface with the previously-unseen keyhole dynamics below and inside the metal that cause the phenomenon.

The power, versatility, and exquisite precision of lasers have made them an indispensable tool for a diverse range of manufacturing processes, including welding, machining, and more recently, additive manufacturing (AM) or three-dimensional (3-D) printing techniques.  But sometimes even the most sophisticated techniques can introduce new problems that can impair their effectiveness.  In laser manufacturing and processing, such a problem is spattering, in which hot liquid metal droplets from the beam's path are strewn from the melt pool.  These droplets, or spatters, might be pretty to observe but are a headache to manufacturers ―  they solidify along the metal surface, creating agglomerations and impurities that must be removed, not to mention craters and defects that compromise the material's structural integrity and properties.  Yet despite years of research, a complete understanding of the mechanisms of laser-induced spattering and how to control it has remained elusive, mostly because of the difficulty of adequately probing the process in real time with only optical and infrared imaging.

The advantages of micrometer spatial resolution, sub-nanosecond temporal resolution, an ultra-high millions-per-second frame rate, and the penetrating power of the extremely bright x-rays allowed the experimental team working at the X-ray Science Division 32-ID-B x-ray beamline of the APS (an Office of Science user facility at Argonne National Laboratory) to visualize unprecedented details in subsurface processes.  The team, from Argonne, the Missouri University of Science and Technology, and the University of Utah defined the laser-induced spattering phenomenon as consisting of four separate events, all of which occur over a span of several microseconds.

At first, the initial J-shaped keyhole under the laser changes to a reverse-triangle-like shape as several small protrusions form near the rim of the front keyhole wall, then flow downward.  In the second event, a following protrusion rapidly grows into a tongue-like one, with a miniature keyhole forming on top, driven by directional vapor plume collisions toward the front wall. This tongue-like protrusion suddenly disappears in a small apparent bulk explosion, leading to the third and fourth identified events, which occur simultaneously:  rapid curvature changes and cratering on the keyhole walls and the emergence of thin melt ligaments along the keyhole rims. As the melt ligaments rise from the keyhole rims, they eventually break up into spatters. Those flying ahead of the laser scanning direction tend to travel in nearly-straight trajectories at a constant speed, but backward-flying spatters exhibit curved trajectories at varying speeds near the keyhole.

The investigators find that these behaviors are directly related to the relationship between the local laser absorption and the changing keyhole morphology, as different areas are rapidly heated or cooled and effects such as melt and vapor flow, pressures, and evaporation come into play.  The team's numerical analyses based on the current experiments cannot yet completely characterize the specific mechanisms of the bulk explosion leading to the spattering, but note that it displays signs of a phase and/or a vapor explosion.  Further description will require more direct thermal measurements and faster imaging at the nanoscale.

As a substantial step forward in the understanding of the laser-induced spattering phenomenon, the research team's work also provides enough new details to begin considering possible solutions to mitigate or even eliminate it in certain laser processing and AM techniques.  In laser powder bed fusion, for example, possibilities could include pre-sintering to make the powder bed more rigid and thus less susceptible to spattering, or the use of a high-velocity laminar gas flow.

The current findings confirm that the most effective ways to reduce and eliminate laser-induced spattering will involve controlling melt and vapor flow, especially within the keyhole.  New laser techniques and control systems might be a practical approach.  For the price of some pretty fireworks, manufacturers will gain a new confidence in the reliability and durability of their laser-processed products.  ― Mark Wolverton