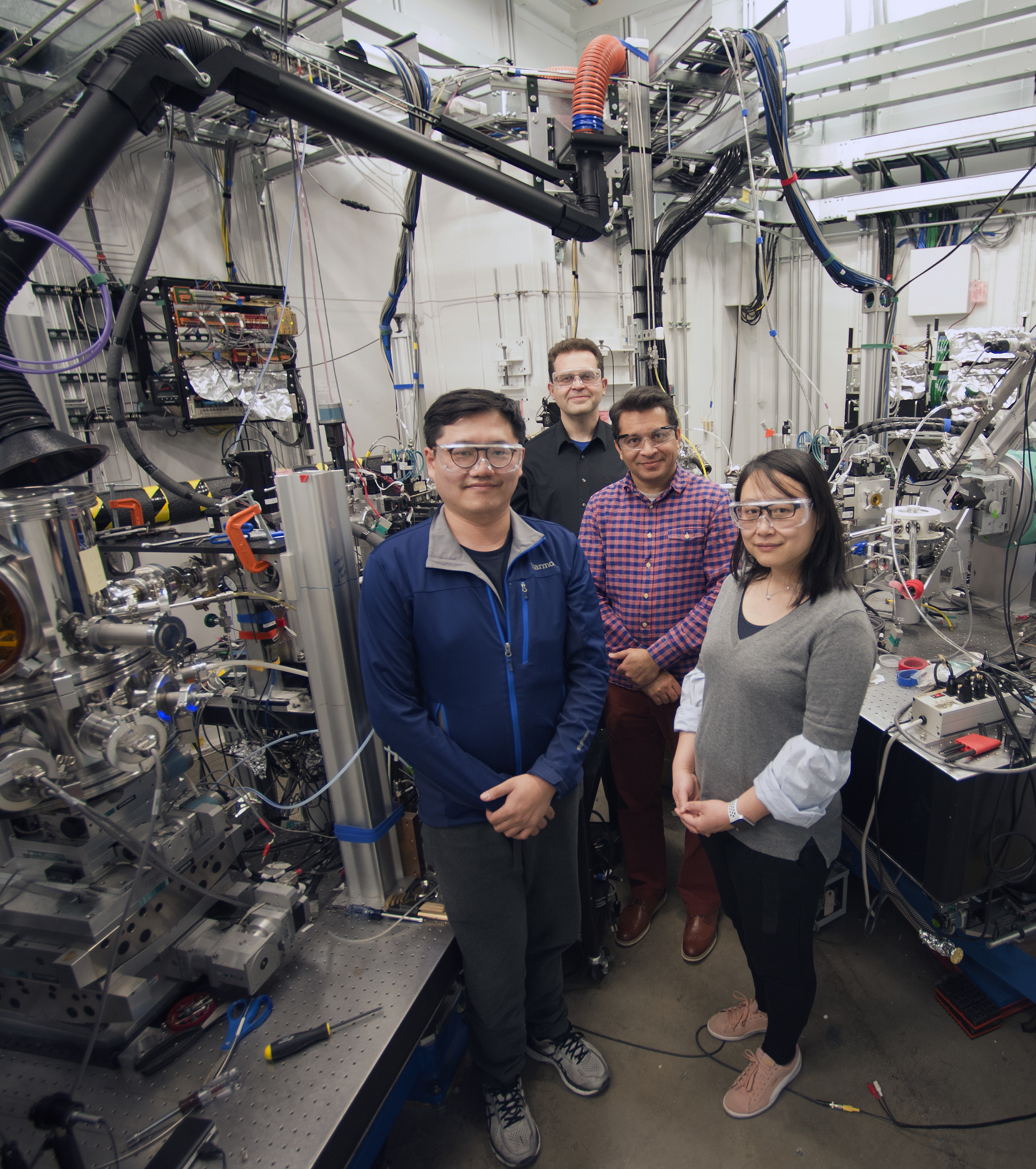 One of the most vital areas of research in the quest for better and cheaper photovoltaic devices centers on hybrid materials based on a perovskite structure. But while many promising compounds have been identified, the realization of truly efficient and commercially viable perovskite-based solar cells continues to be hampered by several factors, including material stability and fragility problems in varying environmental conditions. A university-national laboratory team of researchers has found a promising solution to those problems in a perovskite compound that actually expands under illumination, smoothing out defects in its crystal lattice and allowing more efficient charge transport across the interface, with improved power conversion efficiency (PCE) to over 20%. Their work, based in part on research at the U.S. Department of Energy’s Advanced Photon Source (APS), appeared in the journal Science.

Much of the work on perovskite materials has followed a somewhat trial-and-error approach, combining different materials into a perovskite ABX3 structure and testing the characteristics of the resulting compound. Prior studies have demonstrated that light soaking of certain materials could induce structural changes that improve photovoltaic efficiency, but detailed in situ information that could help researchers better understand, and perhaps tailor the phenomenon has been lacking. 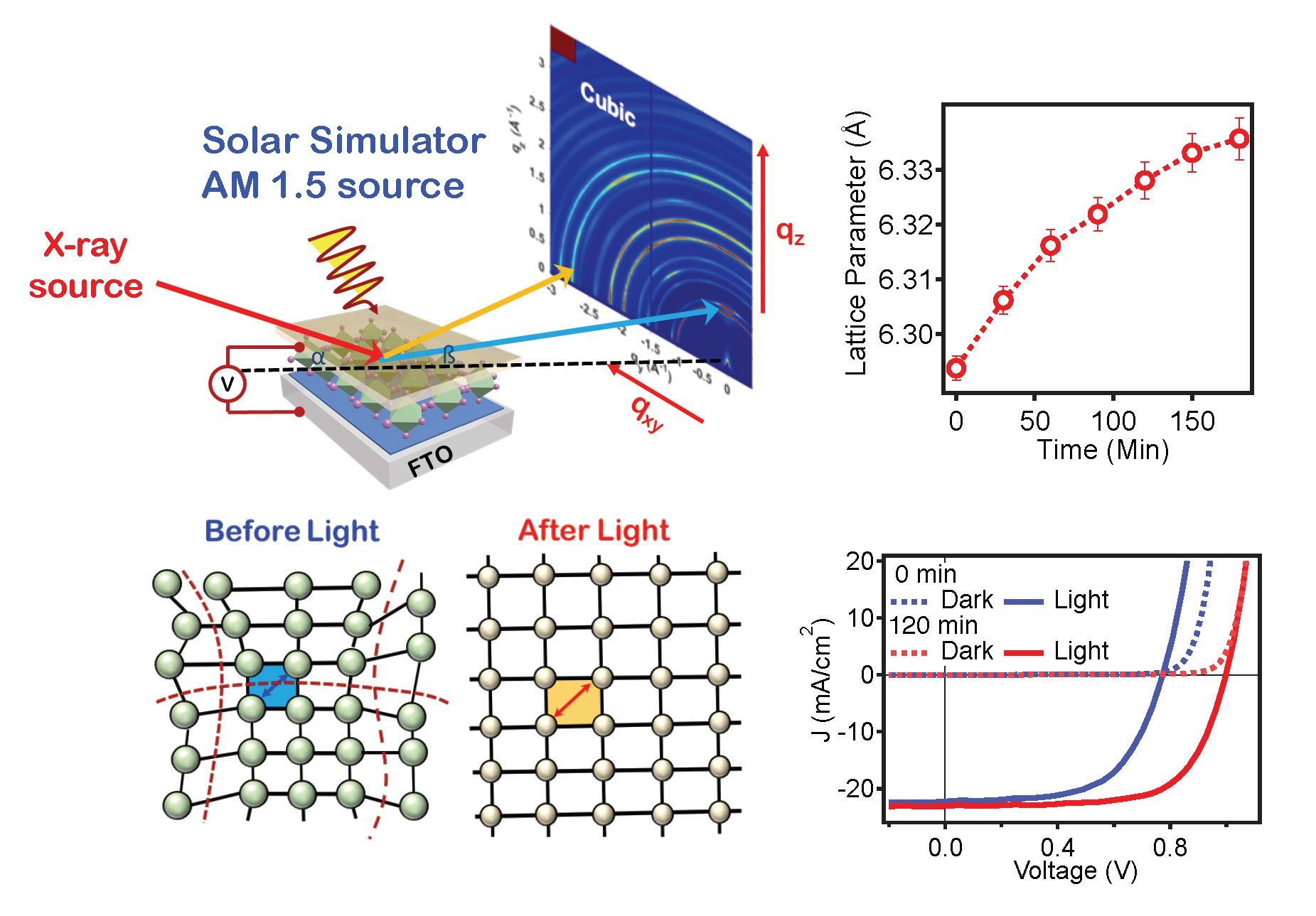 In most of the cells, the researchers noted a substantial improvement in PCE from 18.5% to 20.5% under continuous light soaking with a 1-sun (100 mW/cm2) source as the lattice structure of the hybrid cells uniformly expanded (Fig. 1). This expansion relieved local strains in the bulk material and better aligned the crystal planes, as evidenced by narrowing and uniform shifting of the Bragg peaks toward lower scattering values as seen by GIWAXS. The researchers explain that constant illumination generates electron-hole pairs in the perovskite material, decreasing the distortions of some bonds while elongating others, resulting in a generalized lattice expansion and relaxation. A similar phenomenon was seen with pure MAPbI3 thin films, suggesting that such lattice expansion under light is common for hybrid perovskite materials.

The effects of this light-induced lattice expansion improve the photovoltaic characteristics of the perovskite material in several significant ways. Using various techniques, the team observed that the open circuit voltage and fill factor, both crucial parameters of PV performance, are significantly increased upon lattice expansion. Another factor contributing to substantially increased efficiency is considerable suppression and lowering of the energetic barrier at the perovskite-contact interfaces. In an operational solar cell, this would allow easier current flow from the absorber to the electrodes.

Previous experiments with MAPbI3 films demonstrated some changes in contact interfaces following light soaking, which were attributed to ion migration from the perovskite material to the contact. To rule out such effects in the current work, the experimenters performed x-ray photoelectron spectroscopy (XPS) before and after illumination, and also monitored open circuit voltage and fill factor values in darkness while applying a constant bias current. Neither technique showed any evidence of ion migration as seen in the MAPbI3 film experiments.

The lattice expansion persists for at least 30 minutes in the perovskite materials even when the films are rested in complete darkness after illumination. To exclude any possibility that the lattice expansion might be heat-induced, the experimenters maintained the perovskite films at constant temperature during illumination and in darkness. When exposed to greater illuminations of 10-sun intensity, the films maintained their PV efficiency for considerable time, degrading only to 80% after 600 minutes. The investigators also noted that the light-induced lattice expansion had no noticeable effects on the photovoltaic stability of their devices, even after more than 1500 hours of continuous operation under 1-sun illumination.

These findings not only represent a highly significant step forward in the search for stable and practical perovskite-based photovoltaic devices, but also point the way toward new research possibilities in the fundamental understanding of perovskite-based materials and their behaviors.  ― Mark Wolverton