Supercrystal: A Hidden Phase of Matter Created by a Burst of Light 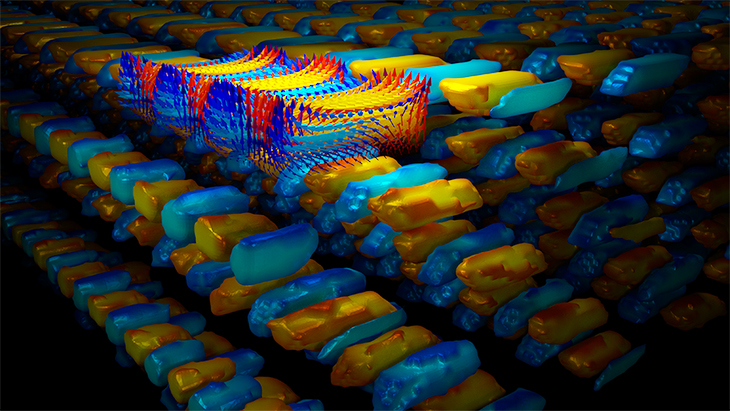 "Frustration" plus a pulse of laser light resulted in a stable "supercrystal" created by a team of researchers from two U.S. universities and three U.S. Department of Energy (DOE) national laboratories, including Argonne National Laboratory. This is one of the first examples of a new state of matter with long-term stability transfigured by the energy from a sub-pico-second laser pulse. The team's goal, supported by the Department of Energy, is to discover interesting states of matter with unusual properties that do not exist in equilibrium in nature. The article is the cover story for the April 2019 Volume 18, Issue 4 Nature Materials.

"We are looking for hidden states of matter by taking the matter out of its comfortable state, which we call the ground state," said Venkatraman Gopalan, Penn State University professor of materials science and leader of the research team that included colleagues from the University of California, Berkeley, Oak Ridge National Laboratory, and Lawrence Berkeley National Laboratory in addition to Argonne. "We do this by exciting the electrons into a higher state using a photon, and then watching as the material falls back to its normal state. The idea is that in the excited state, or in a state it passes through for the blink of an eye on the way to the ground state, we will find properties that we would desire to have, such as new forms of polar, magnetic and electronic states."

Finding these states is done by a pump-probe technique when a laser fires a photon at the sample for 100 femtoseconds at a wavelength of 400 nanometers — blue light. The pump light excites the electrons into a higher energy state and is quickly followed by a probe light, which is a gentler pulse of light that reads the state of the material. The challenge for the team was to find a way to maintain the intermediate state of matter, because the state may exist for only some tiny fraction of a second and then disappear. However, the researchers discovered that, at room temperature, the supercrystal is stuck in that state essentially forever.

Gopalan compares this challenge to sending a ball rolling down a mountain side. It will not come to rest until it reaches the bottom of the mountain, unless something gets in its way, say a ledge. The team accomplished this by "frustrating the system" — not allowing the material to do what it wants to do, which is to allow it to minimize its energy fully without constraints.

The researchers did this by using single atomic layers of two materials, lead titanate and strontium titanate, stacked in alternating layers on top of each other to build up a three-dimensional structure. Lead titanate is a ferroelectric, a polar material that has electrical polarization leading to positive and negative electric poles in the material. Strontium titanate is not a ferroelectric material. This mismatch forced the electric polarization vectors to take an unnatural path, curving back on themselves to make vortices, like water swirling down a drain.

The Berkeley team grew these layers on top of a crystal substrate whose crystals were intermediate in size between the two layered materials. This provided a second level of "frustration," as the strontium titanate layer tried to stretch to conform with the crystal structure of the substrate, and the lead titanate had to compress to conform to it. This put the whole system into a delicate but "frustrated" state with multiple phases randomly distributed in the volume.

At this point, the researchers zapped the material with a laser pulse, which dumps free charges in the material, adding extra electrical energy to the system, driving it into a new state of matter, a supercrystal. These supercrystals have a unit cell — the simplest repeating unit in a crystal — much larger than any ordinary inorganic crystal, with a volume one million times larger than the unit cells of the original two materials. The material finds this state on its own.

Unlike transient states, this supercrystal state stays around potentially forever at room temperature — at least a year in this study — unless it is heated to about 350 degrees Fahrenheit where it is erased. The process can be repeated by hitting the material with a light pulse and erased using heat. This state can only be created by ultrashort laser pulses with a certain minimum amount of threshold energy, and not by spreading out that energy over long pulses.

Vlad Stoica, a post-doctoral scholar shared jointly between Penn State and Argonne National Laboratory, and the lead author of the Nature Materials publication, used high-energy x-ray diffraction at X-ray Science Division x-ray beamlines 7-ID-C, 11-ID-D, 33-BM-C, and 33-ID-D,E at the Advanced Photon Source (APS), an Office of Science user facility at Argonne. The data allowed the team to examine the supercrystal before and after it formed, clearly showing the transformation from disordered matter into a supercrystal.

"By virtue of its short pulse duration, an ultrafast laser imprints excitations in materials faster than their intrinsic response time," Stoica said. "While such dynamical transformations were already explored for decades to stimulate the ordering of materials, a strategy for their steady state stabilization seemed out of reach until now."

The high-resolution x-ray diffraction, combined with imaging at the nanoscale level, was used by the Argonne researchers to observe the evolution of irreversible structural reordering.

"For the first time, we observed that a single ultrafast laser pulse irradiation of artificially layered polar material can induce long-range structural perfection when starting from relative disorder," they said. "This experimental demonstration has already stimulated theoretical developments and has important implications toward future realization of artificial nanomaterials that are not achievable by traditional fabrication."

"The combination of x-rays and ultrafast optical sources at the Advanced Photon Source gave us the best opportunity to explore the supercrystal's nanoscale structure, along with the ability to understand why the material could be repeatedly changed from ordered to disordered states," said physicist John Freeland, corresponding author on the Nature Materials article and a beamline scientist at the APS. "This information, together with the modeling, gave us very deep insight into the physics behind the creation of this new phase."

"It's quite remarkable that our phase-field simulations were able to predict the three-dimensional real-space images of a supercrystal whose diffraction patterns generally match the experimental patterns, and to identify a range of thermodynamic conditions for the stability of the supercrystal. Such integrated experimental and computational studies are extremely useful and productive," Chen said.