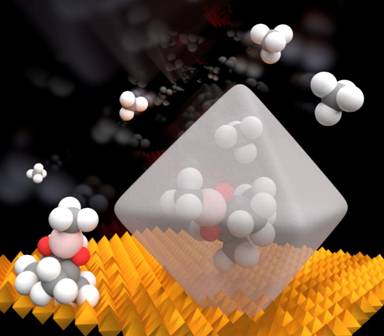 Methane is the main component of natural gas and there are vast reserves of this fossil fuel in reserves around the world. However, rather than simply burning it for heating, this organic compound can be converted into other useful products: liquid fuels, agrochemicals, pharmaceuticals, polymers, and much more. Unfortunately, methane is not particular reactive, chemically speaking. A joint research project from researchers using the U.S. Department of Energy’s Advanced Photon Source (APS) has found a way to "activate" methane by using a catalyst supported in a porous, synthetic material known as a metal-organic framework (MOF). The catalyst is more than 99% selective so generates very little byproduct. Their research was published in Nature Catalysis.

Shale gas and hydraulic fracturing technologies have opened up underground and submarine reserves of natural gas, and specifically methane, to petrochemical companies. In the face of climate change and limited supplies of petrochemical feed stocks, there is pressure to exploit fossil reserves in novel ways.

The methane molecule might be thought of as a tiny tetrahedron, with a singly carbon atom at its heart and a hydrogen atom at each apex of the polyhedron. Such a sturdy chemical structure cannot react with other chemicals in a synthesis aimed and generating more complicated and so more useful compounds. But, there are hopes that a particular reaction known as "selective functionalization" could be used to build up more sophisticated molecules from methane for conversion into useful products. The barrier to exploiting this reaction is finding a catalyst that can make the reaction occur quickly without the need of harsh conditions, such as untenable reaction temperatures and pressures or the use of strong acids. The search for an efficient and effective methane-converting catalyst is considered to be one of the grand challenges facing chemists today.

There are many different types of catalysts used industrially in a wide range of chemical reactions. By definition, a catalyst lowers the so-called activation energy of a chemical reaction and so allows the reaction to get over this metaphorical hill in a much, much shorter time than is possible without the catalyst being present. At the end of the reaction, the ideal catalyst is left wholly unchanged by the process and can be used again.

Reaction conditions are never ideal, of course, and catalysts inevitably become damaged, poisoned, and otherwise lose some of the activity with each repeated use. Finding catalysts that are powerful enough to accelerate methane activation and tough enough to be reused might be possible with a particular class of designer compounds known as metal-organic frameworks. These materials are akin to a synthetic version of porous minerals known as zeolites. The unique advantage of using MOF catalysts combines the qualities of a metal catalyst and a porous support with organic chemical components, which can, in some cases, be tailored to have specific shapes and sizes to their pores.

The pores within a MOF provide a vast internal surface area which can mop up molecules of methane gas and once attached within those pores facilitate the interaction of the methane molecules with another chemical reagent that can convert the methane to a more sophisticated molecule. The use of a compound containing the element boron as the other reagent, specifically bis(pinacolborane), in methane conversion has been shown to work to add a boryl group to the methane molecule. This activates it and allows attachment of other chemical groups by displacing the reactive boryl group.

One particular MOF - Universitetet i Oslo-67, or UiO-67, - is very stable and contains a hexazirconium cluster in each unit with an organic molecular group, 4,4'-biphenyl dicarboxylate (BPDC) linking the metal clusters together. The openings in this porous material are 0.8 nanometers in diameter and the octahedral cavities have a volume of 1.1 cubic nanometers. This allows methane and bis(pinacolborane) inside and once held within, they can react to generate a new borylated methane molecule with just a single boryl group (Fig. 1). A second form of the molecule which has two boryl groups would normally be more likely to form in solution, but within the precise confines of UiO-67 it is too big to fit and so does not form in the MOF.

The team of researchers from Argonne National Laboratory and Northwestern University, acquired x-ray absorption measurements on the insertion device beamline 10-ID-B of the Materials Research Collaborative Access Team (MR-CAT) at the APS (the APS is an Office of Science user facility at Argonne). Critically, this work showed in combination with inductively coupled plasma atomic emission spectroscopy (ICP-AES) that the iridium metal atoms in UiO-67-Mix-Ir were present with two atoms per zirconium node in the porous structure. Additionally, the energy-dispersive x-ray analysis showed that the iridium was uniformly present throughout the MOF crystallites.

Such chemical details about the catalyst are essential to proving that the catalyst is working in the way the team predicted it would. Moreover, understanding the details of the catalyst's structure and how it facilitates the chemoselective borylation of methane will allow researchers to fine tune the catalyst and potentially develop related MOFs that could be used to modify methane in other ways. It might also help in the design of MOFs that could be used for entirely different chemical transformation of other small organic molecules.  ― David Bradley

This work was supported as part of the Inorganometallic Catalyst Design Center, an Energy Frontier Research Center funded by the U.S. Department of Energy (DOE) Office of Science-Basic Energy Sciences, under award DESC0012702. MR-CAT operations are supported by the U.S. DOE and the MR-CAT member institutions. This work made use of the IMSERC, Jerome B. Cohen X-Ray Diffraction, EPIC, and KECK II facilities of Northwestern University’s NUANCE Center, which has received support from the Soft and Hybrid Nanotechnology Experimental Resource (National Science Foundation ECCS-1542205), the MRSEC programme (NSF DMR-1121262) at the Materials Research Center, the International Institute for Nanotechnology, the Keck Foundation, and the State of Illinois, through the International Institute for Nanotechnology. This research used resources of the Advanced Photon Source, a U.S. Department of Energy (DOE) Office of Science User Facility operated for the DOE Office of Science by Argonne National Laboratory under Contract No. DE-AC02-06CH11357.