A New Molecule Could Help Put the STING on Cancer 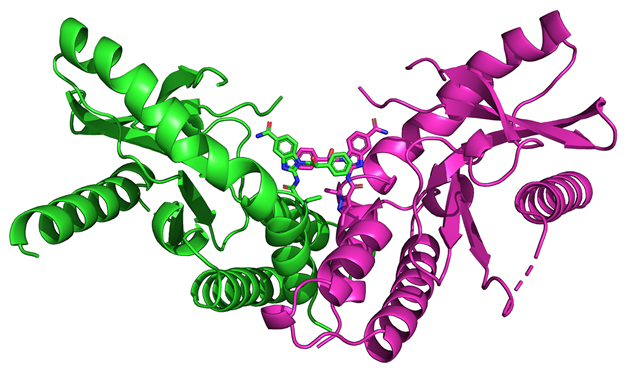 The protein STING (stimulator of interferon genes) is a component of the innate immune system. It plays a major role in the immune response to cancer, and abnormal STING signaling has been shown to be associated with certain cancers. Immunomodulatory approaches using agonists to target STING signaling are therefore being investigated as anticancer treatments. However, the compounds in clinical trials typically are injected intratumorally in patients with solid cancers. In this study, researchers discovered a novel STING agonist, known as an amidobenzimidazole (ABZI), which can be given by intravenous injection and could therefore potentially open up its evaluation as a treatment for hard-to-reach cancers. Using x-ray diffraction data collected at the U.S. Department of Energy’s Advanced Photon Source (APS), researchers from GlaxoSmithKline (GSK) investigated ABZI compounds and STING. Their results, published in the journal Nature, may have important implications for anticancer immunotherapy.

STING is a protein that mediates innate immunity, and one function of the STING signaling pathway is in mobilizing an immune response against tumors. STING proteins can be activated by cyclic dinucleotides, small molecules that are made by the cytosolic DNA sensor, cGAS, upon sensing of DNA leaking out of the nucleus as a result of DNA damage, including that which might be associated with cancer development.

As such, the potential use of activators of the STING pathway represents a growing area of interest in cancer immunotherapy that aims to stimulate a specific type of T-cell in the immune system that targets and destroys cancer cells. Development of synthetic cyclic dinucleotide molecules to target the STING pathway has become a particular focus in this area. To date, these synthetic molecules have been investigated in clinical trials, in which patients with accessible solid tumors receive injections of these compounds directly into their tumors. This treatment aims to activate the STING pathway and the immune system, and ultimately shrink the tumor.

However, this method of drug delivery is not only challenging to perform, but inevitably is only useful for patients who have solid accessible tumors. With this in mind, the GSK researchers developed a new small-molecule STING agonist that can be given by intravenous injection.

First, they used high-throughput screening as a technique to search among millions of small molecules, hoping to find some that bind to STING and regulate its activity. In this process, they found that the small molecule ABZI showed promise in this area.

Next, using diffraction data collected at the Life Sciences Collaborative Access Team 21-ID-F beamline at the APS, the group determined the crystal structure of one ABZI compound in complex with STING (Fig. 1), which itself is a homodimer of two identical subunits. They showed that two molecules of the ABZI compound were in close proximity to each other when they bound to STING. (The APS is an Office of Science user facility at Argonne National Laboratory.)

Based on this information, the researchers then produced a diABZI compound by covalently linking together two of the ABZI compounds. They found that the diABZI bound to STING ~1000-fold more tightly than the original ABZI did.

After further modifying the structure of the diABZI to make it even more potent, the group tested it in a mouse model of colorectal cancer, in which mice with colorectal tumors received either diABZI or vehicle by intravenous injection. Compared with the vehicle-treated animals, the diABZI-treated mice showed improved survival and tumor regression, with eight out of ten mice being tumor-free by day 43.

According to the researchers, diABZIs are novel compounds and are also the first potent, non-nucleotide STING agonists. The results of this study hold promise for a new therapeutic approach with potential to improve cancer treatment.  ― Nicola Parry

Use of the Life Sciences Collaborative Access Team beamline was supported by the Michigan Economic Development Corporation and the Michigan Technology Tri-Corridor (Grant 085P1000817). This research used resources of the Advanced Photon Source, a U.S. Department of Energy (DOE) Office of Science User Facility operated for the DOE Office of Science by Argonne National Laboratory under Contract No. DE-AC02-06CH11357.