A Strange Phenomenon that Helps and Hurts Lithium-Ion Battery Performance 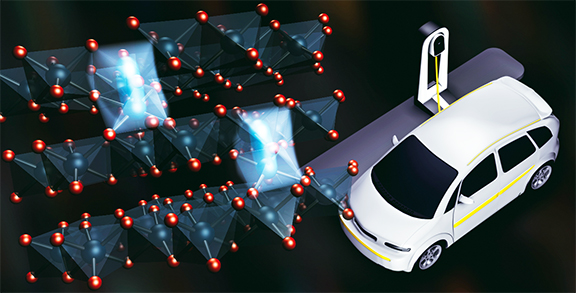 New research offers the first complete picture of why a promising approach of stuffing more lithium into battery cathodes leads to their failure. A better understanding of this could be the key to smaller phone batteries and electric cars that drive farther between charges.

The lithium-ion batteries that power electric vehicles and phones charge and discharge by ferrying lithium ions back and forth between two electrodes, an anode and a cathode. The more lithium ions the electrodes are able to absorb and release, the more energy the battery can store.

One issue plaguing today’s commercial battery materials is that they are only able to release about half of the lithium ions they contain. A promising solution is to cram cathodes with extra lithium ions, allowing them to store more energy in the same amount of space. But for some reason, every new charge and discharge cycle slowly strips these lithium-rich cathodes of their voltage and capacity.

A new study based on experiments several U.S. Department of Energy (DOE) research facilities, including the Advanced Photon Source (APS) at Argonne National Laboratory, provides a comprehensive model of this process, identifying what gives rise to it and how it ultimately leads to the battery’s downfall. Led by researchers from Stanford University and the DOE’s SLAC National Accelerator Laboratory and Lawrence Berkeley National Laboratory, it was published in Nature Materials.

“This research addressed a lot of misconceptions in the field,” said study lead William Gent, a Stanford University Siebel Scholar and winner of an Advanced Light Source and Molecular Foundry Doctoral Fellowship at Berkeley Lab. “There's a long way to go, but now we have a foundational understanding of the properties that lead to this process that's going to help us harness its power rather than just stab at it in the dark.”

The cycling of lithium through a battery is like a sponge relay, a staple of picnics and Fourth of July barbecues that challenges participants to transfer water from one bucket to another using only a sponge. The more absorbent the sponge, the more water can be squeezed into the second bucket.

Lithium-rich battery cathodes are like super-absorbent sponges, able to soak up nearly twice as many lithium ions as commercial cathodes, packing as much as twice the energy into the same amount of space. This could allow for smaller phone batteries and electric vehicles that travel farther between charges.

Most lithium ion battery cathodes contain alternating layers of lithium and transition metal oxides – elements like nickel or cobalt combined with oxygen. In commercial batteries, every time a lithium atom leaves the cathode for the anode, an electron is snagged from a transition metal atom. These electrons create the electrical current and voltage necessary to charge the material.

But something different happens in lithium-rich batteries.

“An unusual feature of lithium-rich cathodes is that the electron comes from the oxygen rather than the transition metal,” said Michael Toney, a distinguished staff scientist at SLAC and a co-author of the paper. “This process, called oxygen oxidation, enables cathodes to extract about 90% of the lithium at a high enough voltage that it boosts the energy stored in the battery.”

But imagine in the sponge relay that with every subsequent soak, the structure of the sponge changes: the fibers stiffen and bundle together, eating up the empty space that makes the material so efficient at absorbing water. Oxygen oxidation does something similar. The authors’ previous study, published in Nature Communications, showed that every time lithium ions cycle out of the cathode into the anode, some transition metal atoms sneak in to take their place and the atomic structure of the cathode becomes a little messier. The layered structure essential to the cathode’s performance slowly falls apart, sapping its voltage and capacity.

In this new study, the researchers showed that this is because yanking the electron from oxygen makes it want to form another bond and transition metal atoms have to move around to accommodate that bond, changing the atomic structure.

“This is the first paper that provides a complete model as to why these things are related and where a lot of the lithium-rich cathode’s unusual properties come from,” said Jihyun Hong, a Stanford and SLAC postdoc, now at the Korea Institute of Science and Technology.

Toney said it took the combination of theory and many experimental methods to disentangle this complicated problem. These included high-resolution powder x-ray diffraction at beamline 2-1 and x-ray absorption spectroscopy at beamline 2-2, both at SLAC’s Stanford Synchrotron Light Source (SSRL); resonant inelastic x-ray scattering maps collected at beamline 8.0.1 and transmission O K-edge small-angle x-ray scattering measured at beamline 11.0.2, both at the Berkeley Lab’s Advanced Light Source (ALS), as well as work at the Berkeley Molecular Foundry; and x-ray total scattering data collected at X-ray Science Division beamline 11-ID-B and x-ray absorption spectroscopy at XSD beamline 20-BM-B, both at the APS (all of the preceding are Office of Science user facilities).

This combination allowed the team to conclusively demonstrate the strong driving force behind changes in the cathode’s bonding configuration during oxygen oxidation. The next step, Toney says, is to find ways to produce those changes without totally disrupting the cathode’s crystal structure.

“Because oxygen oxidation gives rise to extra energy density, being able to understand and control it is potentially a game changer in electric vehicles,” said William Chueh, Assistant Professor of Materials Sciences at Stanford, who co-led the study. “So far, progress in this space has been largely incremental, with improvements of only a few percent per year. If we can find a way to make this work, it would be a huge step forward in making this technology practical.”