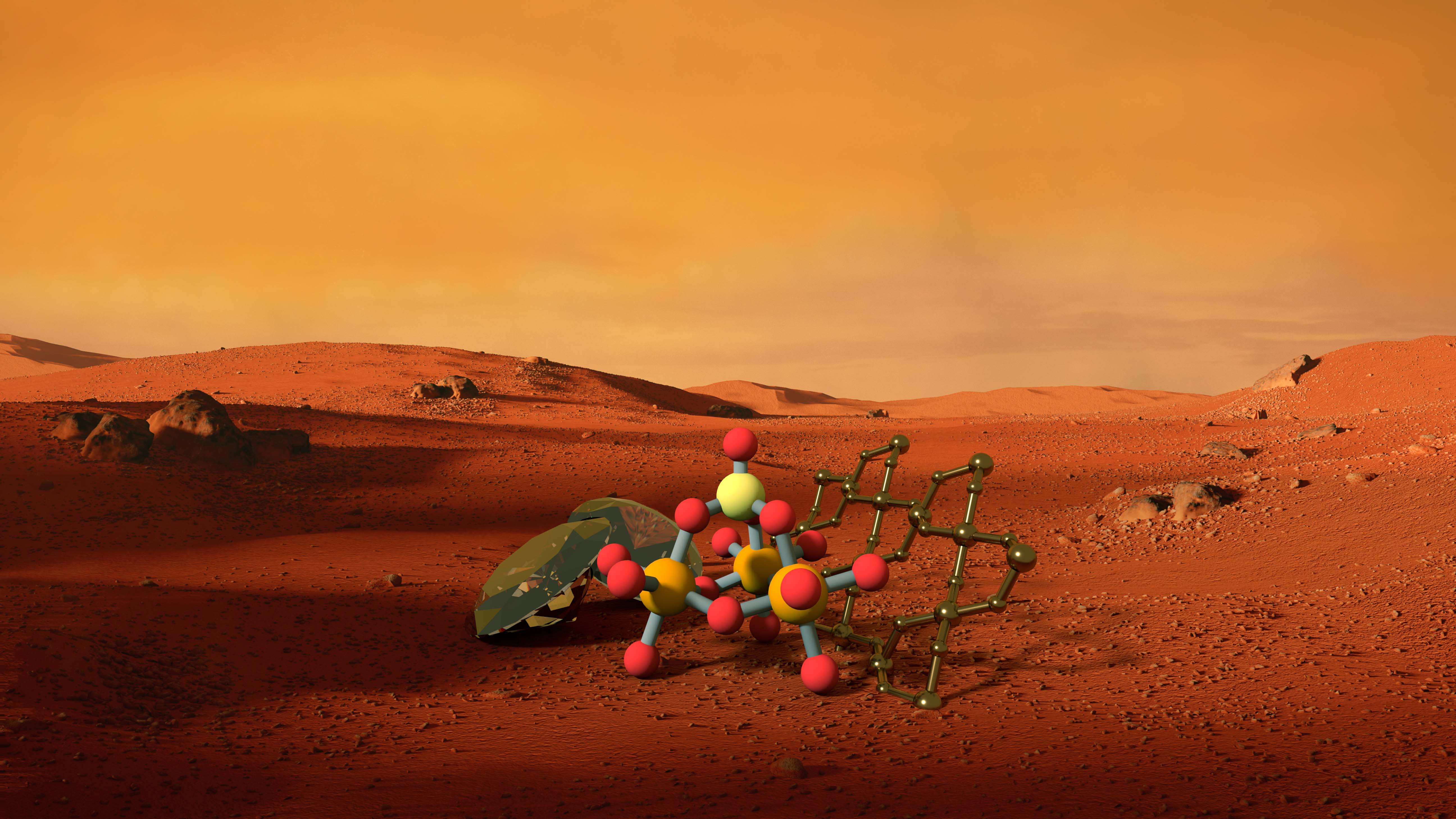 Jarosite, a hydrous sulfate mineral exhibiting unusual magnetic behavior, has intrigued scientists in a range of fields from planetary science to inorganic chemistry. Interactions between iron ions in the material’s lattice structure cause instances of magnetic frustration, which should lead the material to be magnetically disordered. So then, why does jarosite display overall magnetic order under certain conditions? Previous attempts to unravel the mystery of jarosite’s magnetism resulted in contradictory data. Researchers now understand that past studies lacked the technology necessary to account for the material’s myriad magnetic interactions. In this study, researchers working at the U.S. Department of Energy’s Advanced Photon Source (APS) subjected samples of jarosite to extreme pressures in order to systematically vary local coordination environments throughout the material, then observed how these changes affected the material’s magnetic ordering behavior. These findings ultimately unveiled the mechanism for jarosite’s three-dimensional (3-D) magnetic ordering and revealed a great deal about the nature of geometric magnetic frustration. Moreover, this study serves as a blueprint for how chemists can use pressure to conduct chemically pure magnetostructural correlation studies. By bringing high-pressure techniques to the attention of the chemical community, even the most perplexing magnetostructural mechanisms can be unraveled.

How does a material’s geometric structure impact its magnetic behavior? And how can we find out? These are a few of the questions occupying the minds of scientists studying magnetic and superconducting materials. One material in particular has confounded researchers across a wide range of scientific disciplines.

Jarosite, KFe3(OH)6(SO4)2, is a mineral that can be found not only in ore deposits on Earth but has also been detected by rovers on the surface of Mars. The structure of jarosite (Fig. 1) consists of two-dimensional lattice sheets with triangular coupling. Interactions between iron atoms on these kagomé lattices cause the iron ions to exhibit spin-frustrated, antiferromagnetic behavior. But although this antiferromagnetic coupling should cause the material to be magnetically frustrated, the material displays overall magnetic order below 65 kelvin. This counterintuitive magnetic behavior, which has puzzled researchers for decades, has recently been explained.

Understanding jarosite’s magnetic behavior requires that scientists be able to systematically control all of the variables contributing to the material’s overall magnetism. To do this requires sophisticated experimental techniques. In this study, researchers from Northwestern University, Argonne National Laboratory, the University of Illinois at Urbana−Champaign, and the Carnegie Institution for Science employed diamond anvil cells to apply extreme pressure to samples of jarosite. Under high pressure, the local coordination environments around the iron ions were able to be manipulated without affecting the material’s chemical composition. Then, to observe the resulting changes in magnetic ordering behavior, the researchers combined various cutting-edge synchrotron x-ray research methods at the APS, an Office of Science user facility at Argonne, to study the material’s crystallographic, magnetic, and electronic properties under pressure.

To determine a structure-function correlation, in situ synchrotron powder x-ray diffraction experiments were conducted using the High Pressure Collaborative Access Team (HP-CAT) beamline 16-ID-B at the APS. Single-crystal x-ray diffraction data were collected using the 6-circle diffractometer at the GeoSoilEnviroCARS (GSECARS) beamline 13-BM-C, also at the APS. With these techniques, researchers were able to vary the interlayer spacing and metal-ligand bond distances. Then, using data from SQUID-based magnetometry and synchrotron Mössbauer spectroscopy experiments, which were collected at the HP-CAT 16-ID-D beamline, as well as data from x-ray magnetic circular dichroism experiments, which were collected using the X-ray Science Division 4-ID-D beamline at the APS, the researchers constructed a pressure-dependent magnetic phase diagram and determined jarosite’s magnetic and electronic structures at high pressure. These data, seen in Fig. 2, revealed a comprehensive map of jarosite’s magnetic coupling interactions.

This study represents a first-of-its kind simultaneous structural-electronic-magnetic study of jarosite. By conducting an innovative combination of experimental techniques at the APS, these researchers were able to achieve a pressure-induced phase transition without breaking the kagomé lattice symmetry or altering the iron ion spin state. The researchers ultimately discovered that jarosite’s unique magnetic ordering temperature was—surprisingly—not due to interlayer magnetic coupling as previously thought, but instead due to an increase in the Fe–O–Fe magnetic coupling, which is directly proportional to the Fe–O metal ligand covalency.

The impacts of this research stretch beyond the study of jarosite. This research demonstrates that high-pressure techniques are highly effective at elucidating structural, electronic, and magnetic mechanisms while maintaining a material’s chemical integrity. Chemistry conducted at extreme pressures can induce new phases and unlock extraordinary material properties. The researchers believe that these techniques may eventually play a part in illuminating complicated superconducting mechanisms, such as the puzzling doped cuprate systems. — Alicia Surrao

This experimental work on creating materials is supported by the Air Force Office of Scientific Research (FA9550-17-1-0247). Research on kagomé lattices is supported by the Army Research Office (W911NF1810006). The collaborative project between D.E.F and S.D.J. is supported by Northwestern University through the Innovative Initiatives Incubator and supports J.P.S.W. S.M.C. acknowledges support from the U.S. National Science Foundation (NSF) GRFP (DGE-1324585). S.D.J. acknowledges support from the Carnegie/U.S. Department of Energy (DOE) Alliance Center, the NSF (EAR-1452344), and the David and Lucile Packard Foundation. W.B. is partially supported by the Consortium for Materials Properties Research in Earth Sciences (COMPRES). The UV−vis spectroscopy work was supported by NSF Grant CHE1506683. HP-CAT operations are supported by the DOE-National Nuclear Security Administrstion Office of Experimental Sciences. GeoSoilEnviroCARS is supported by the NSF-Earth Sciences (EAR - 1634415) and DOE-GeoSciences (DE-FG02-94ER14466). Use of the COMPRES-GSECARS gas loading system was supported by COMPRES under NSF Cooperative Agreement EAR -1606856 and by GSECARS through Experiments at 13-BM-C were conducted under the Partnership for Extreme Crystallography (PX∧2), also supported by COMPRES. This work made use of the IMSERC facility at NU, supported by NSF NNCI-1542205; the Keck Foundation; the State of Illinois; and the IIN. This research used resources of the Advanced Photon Source, a U.S. DOE Office of Science User Facility operated for the DOE Office of Science by Argonne National Laboratory under Contract No. DE-AC02-06CH11357.