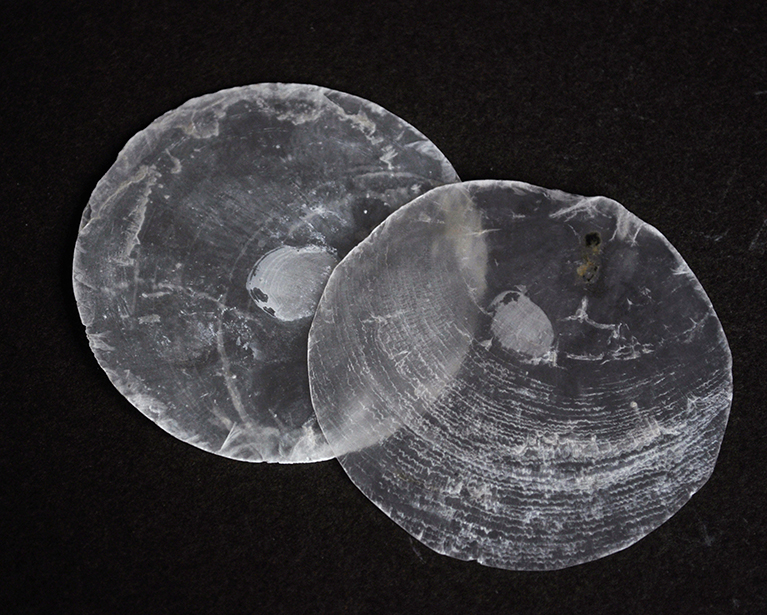 The mollusk Placuna placenta grows a shell both mechanically strong and translucent enough to use for window panes in areas where the shellfish is plentiful. The shell’s translucence (Fig.1) makes it especially intriguing, because it’s much tougher than common translucent or transparent materials such as glass or high-performance plastics. To understand why it is so damage resistant, researchers imaged the material in three dimensions (3-D) using the U.S. Department of Energy’s Advanced Photon Source (APS) at Argonne. They found that pervasive defects in the layered, crystalline structure allowed the shell to localize damage and keep it from spreading. This insight could lead to transparent, super-tough ceramics for use in electronics, automobiles, armor, and a host of other applications.

P. placenta shell is a laminate composite material, composed of many layers of calcite held together with a tiny bit of organic matrix. Laminate composites often have better mechanical properties than the individual materials alone. Car windshields, for example, are made of two layers of glass sandwiching a piece of flexible plastic, which holds the glass together in case it shatters.

Many shellfish have mineral-organic composite shells, but few are as translucent as P. placenta. And most shells contain more organic material than P. placenta, which is more than 99% calcite by weight. How a material that was almost entirely calcite with a touch of organic stuff added could be an order of magnitude tougher than calcite alone was a mystery.

To figure it out, researchers from the Massachusetts Institute of Technology (MIT) used the X-ray Science Division 2-BM-A,B x-ray beamline at the APS, an Office of Science user facility, to construct a 3-D image of the shell’s microscopic structure after mechanical loading. (Typical electron microscopes cannot visualize this type of structure in 3-D.) The 2-BM-A,B beamline allowed the MIT team to image a much larger section, at much higher resolution and with a broader field of view than could be done with a less powerful synchrotron.

But first, the researchers studied intact shells via electron microscopy. The intact shell revealed a special, hidden micro-structural feature: each calcite layer merges into an adjoining layer at some point in the shell. The secret to the P. placenta shell’s toughness lies in this 3-D interconnected laminate structure. Instead of being a classic laminate of neatly stacked, discrete layers, the cross-section of the shell looks more like a staircase, with each step sloping and joining with the next in an uneven pattern. The microscopic structures through which the layers are joined together resemble screw dislocations in a crystalline material. But these defect-like microstructures stop cracks in their tracks, as the researchers found when they looked at damaged shells.

The researchers indented pieces of P. placenta shell with a sharp tungsten tip until the shell fractured, then imaged the damaged area with the synchrotron x-ray beam at the APS. They found that even when the tungsten point passed completely through the shell, the damage was contained to the area immediately around the hole (Fig. 2A). No cracks traveled away from the hit point. The shell could even take multiple hits in the same area without allowing the damage to travel.

A closer look at the damaged P. placenta shell showed that although some cracks started radially from the hole, they quickly interlocked into a 3-D mesh (Fig. 2B). This complex mesh of microcracks was a direct result of the thousands of interconnection points within the laminate composite.

The 3-D mesh of cracks provided a large interfacial area to dissipate energy within a small volume, preventing the damage from spreading far from the damage site. Similar indentation experiments performed on pure calcite samples showed radial cracks leading to brittle catastrophic failure. The calcite easily split along its cleavage planes, and the maximum load and toughness were much lower than what the P. placenta shell could take.

The mechanisms of the shell’s extreme toughness are directly applicable to other ceramic-based structural materials for engineering applications. These researchers are now working on designing a bio-inspired transparent material that can localize damage in a similar way.

This work was supported by the National Science Foundation through the MIT Center for Materials Science and Engineering (DMR-0819762) and the National Security Science and Engineering Faculty Fellowship Program (N00244-09-1-0064). This research used resources of the Advanced Photon Source, a U.S. Department of Energy (DOE) Office of Science User Facility operated for the DOE Office of Science by Argonne National Laboratory under Contract No. DE-AC02-06CH11357.