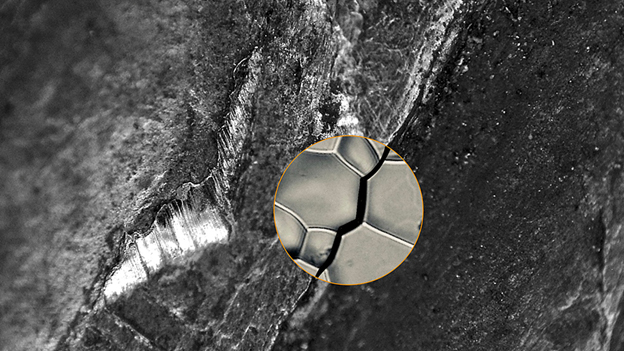 In work that could help prevent the failure of everything from bridges to dental implants, a team of researchers utilized the U.S. Department of Energy’s Advanced Photon Source (APS) to obtain the first three-dimensional (3-D) image of a microscopic crack propagating through a metal damaged by hydrogen.

“For the first time we were able to catch the crack red-handed,” said Michael J. Demkowicz, associate professor in the Department of Materials Science and Engineering at Texas A&M University and corresponding author on the study, which was published in the journal Nature Communications.

Previously, the only way to analyze such a metal failure was to look at the separated pieces of a completely fractured component, which entails a certain amount of guesswork. The new research shows what is happening at the crack tip as a part begins to fracture.

“It’s much better than arriving at the crime scene after the fact,” said Demkowicz.

As a result, the team, which also included researchers from the Massachusetts Institute of Technology, Johns Hopkins University, Carnegie Mellon University, Lawrence Livermore National Laboratory, and Argonne National Laboratory identified 10 microscopic structures that make metals stronger and less susceptible to a key environmental factor—the hydrogen around us—that can damage them.

This work also represents a milestone for XRAT as the first experiment performed by researchers outside of the team at Argonne and Carnegie Mellon University that developed the technique, whose combined experimental tool and analysis software are unique in the world.

Metals surround us in any number of structures and devices, but they can be negatively affected by the ubiquitous hydrogen around us, mostly from water. “Hydrogen gets into the metal and causes it to fracture unexpectedly in a process called hydrogen embrittlement,” said John P. Hanson, a reactor engineer at Oklo and first author of the paper. One prominent example involves the Bay Bridge in San Francisco. As the bridge was being constructed in 2013, engineers discovered that 32 of the 96 huge bolts key to the structure had cracked due to hydrogen embrittlement. The problem was caught early so there was no catastrophe, but it delayed the opening of the bridge by a few years.

Scientists have studied hydrogen embrittlement for over 150 years, but it remains difficult to predict. “That’s largely because we don’t have a complete understanding of the mechanisms behind it,” said Hanson, who conducted the work while earning his doctorate from the Massachusetts Institute of Technology (MIT).

“As a result, engineers have to overdesign with additional material to cover any sudden failure and that costs a lot,” said co-author Peter Kenesei of the Materials Physics and Engineering Group in XSD, who operates the instruments used in the work. “So a better understanding of this behavior could have a huge economic impact.”

A metal is composed of microscopic crystals, or grains. In nickel superalloys, the fractures brought on by hydrogen embrittlement travel along the boundaries between those grains. Hanson said the unique tools at the APS beamline 1-ID allow for the first time to not only look at the grain orientations around a crack in progress, but also the grain boundaries. From those observations, the team identified 10 grain boundaries that are more resistant to cracks.

“We were able to show not only which grain boundaries are stronger, but exactly what it is about them that improves their performance,” Hanson said. This could ultimately allow engineers to build stronger metals by designing them with those characteristics.

In the nearer term, the Argonne tools could be used to image the microstructure of existing metal components to better predict their susceptibility to failure. Kenesei notes that the tools are already being used this way to study other engineering materials, such as those related to airplanes, batteries and nuclear reactors.

The study took eight years to complete, primarily because it involved huge amounts of data that were difficult to analyze. The raw data for the work would fill almost 400 DVDs. Further, the data looks nothing like a three-dimensional model of the material. “It’s highly encrypted in the form of streaks and dots, or diffraction patterns, that must be analyzed by a supercomputer,” said Robert M. Suter from Carnegie Mellon University, an expert on the analysis.

To put the challenges in perspective, Demkowicz notes that the crack microstructure is actually much more complicated than the structure of DNA, which Watson and Crick determined through the same general process, but by hand.

This work was supported by the BP-MIT Materials and Corrosion Center. Access to shared experimental facilities at MIT was provided by the MIT Center for Materials Science Engineering, supported in part by the MRSEC Program of the National Science Foundation under Award number DMR-0213282. Work at Carnegie-Mellon University was supported by the U.S. Department of Energy (DOE) Office of Science-Basic Energy Sciences grant DESC0002001. Computational support for this research was provided by grant TG-DMR130061 from the National Science Foundation’s Extreme Science and Engineering Discovery Environment (XSEDE) advanced support program. A.B. acknowledges support from the National Science Foundation, Grant No 1150862, for support in HEDM data analysis. J.P.H. acknowledges the DOE Ofﬁce of Science Graduate Fellowship Program, made possible in part by the American Recovery and Reinvestment Act of 2009, administered by ORISE-ORAU under contract no. DE-AC05-06OR23100. This research used resources of the Advanced Photon Source, a U.S. DOE Ofﬁce of Science User Facility operated for the DOE Ofﬁce of Science by Argonne National Laboratory under Contract No. DE-AC02-06CH11357.