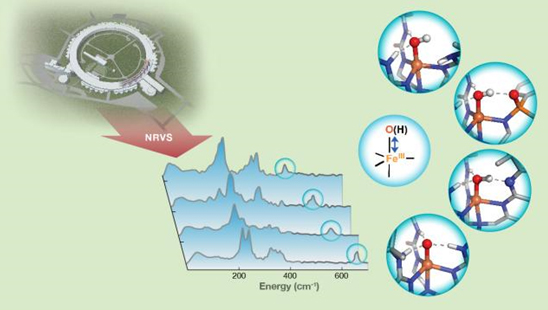 Researchers working at the U.S. Department of Energy’s Advanced Photon Source (APS) employed nuclear resonance vibrational spectroscopy to probe the hydrogen bonds that modulate the chemical reactivity of enzymes, catalysts, and biomimetic complexes. The technique could lead to the development of better catalysts for use in a wide range of fields. The findings were published as a "Very Important Paper" in Angewandte Chemie and featured on the journal's back cover.

Hydrogen bonds are among the most fundamental interactions found in biology and chemistry. They are responsible for many of the chemically important properties of water, for the stabilizing the structures of proteins and nucleic acids, including those found in DNA and RNA, and contribute to the structure of natural and synthetic polymers.

Research has shown that hydrogen bonds play an important role in tuning the reactivity of the metal centers of metalloenzymes and metal containing catalysts. However, little research has been done to experimentally demonstrate how systematic changes to hydrogen bonds within the secondary coordination sphere — molecules found in the vicinity of metal centers that do not have direct bonding interactions with the center — influence catalytic activity.

In catalysis, enzymes or synthetic catalysts spur on a chain of chemical reactions, which produce a number of intermediate structures or species. Understanding those structures and their chemical properties is key to understanding the entire reaction.

"Thoroughly understanding the chemical reactivity of the reactive intermediate is a key step to determining how to design highly efficient and selective catalysts for C-H functionalization," said Yisong Guo, assistant professor of chemistry at Carnegie Mellon and the study's lead author. "In the case of dioxygen-activating enzymes, the key intermediates of catalysis are iron-oxo (Fe-O) and iron-hydroxo (Fe-OH) species, which are involved in important biological processes, such as DNA biosynthesis, DNA and RNA repair, post-translational modification of proteins, biosynthesis of antibiotics and degradation of toxic compounds."

Guo and colleagues from Carnegie Mellon University and the University of California, Irvine, utilized 57Fe nuclear resonance vibrational spectroscopy (NRVS), a newly developed synchrotron radiation-based technique, to detect the vibrational frequency of Fe-O and Fe-OH units of synthetic complexes that interact with the secondary coordination sphere through hydrogen bonds. The NRVS technique, which takes advantage of the high resolution afforded by synchrotron x-ray sources like the APS to resolve vibrational fine structure, probes vibrational energy levels and is specific for samples that contain nuclei that respond to Mössbauer spectroscopy, most commonly iron. The NRVS studies were carried out at the X-ray Science Division 3-ID-B,C,D beamline at the APS, an Office of Science user facility at Argonne National Laboratory. Changes in the frequencies revealed valuable information about the bond strengths of these units and further provided a qualitative measure of hydrogen bond strength.

Guo says that this study is a proof-of-concept for using NRVS to probe hydrogen bonds. He plans to continue using this method to study more iron-oxo and iron-hydroxo species in both synthetic complexes and enzymes to build up the amount of available data to correlate chemical reactivity of these species with the changes of hydrogen bond interactions, with the hope that that information could be used to develop more efficient and effective catalysts.

The authors thank the U.S. National Institutes of Health (GM050781 to A.S.B., GM077387 to M.P.H.) and the U.S. National Science Foundation (CHE-1654060 to Y.G.) for funding support. They also thank M. Hu, J. Zhao, and E. E. Alp for their support in collecting NRVS spectra; Ruixi Fan and Dr. Jikun Li from Carnegie Mellon University for beamtime assistance. This research used resources of the Advanced Photon Source, a U.S. Department of Energy (DOE) Office of Science User Facility operated for the DOE Office of Science by Argonne National Laboratory under contract no. DE-AC02-06CH11357.