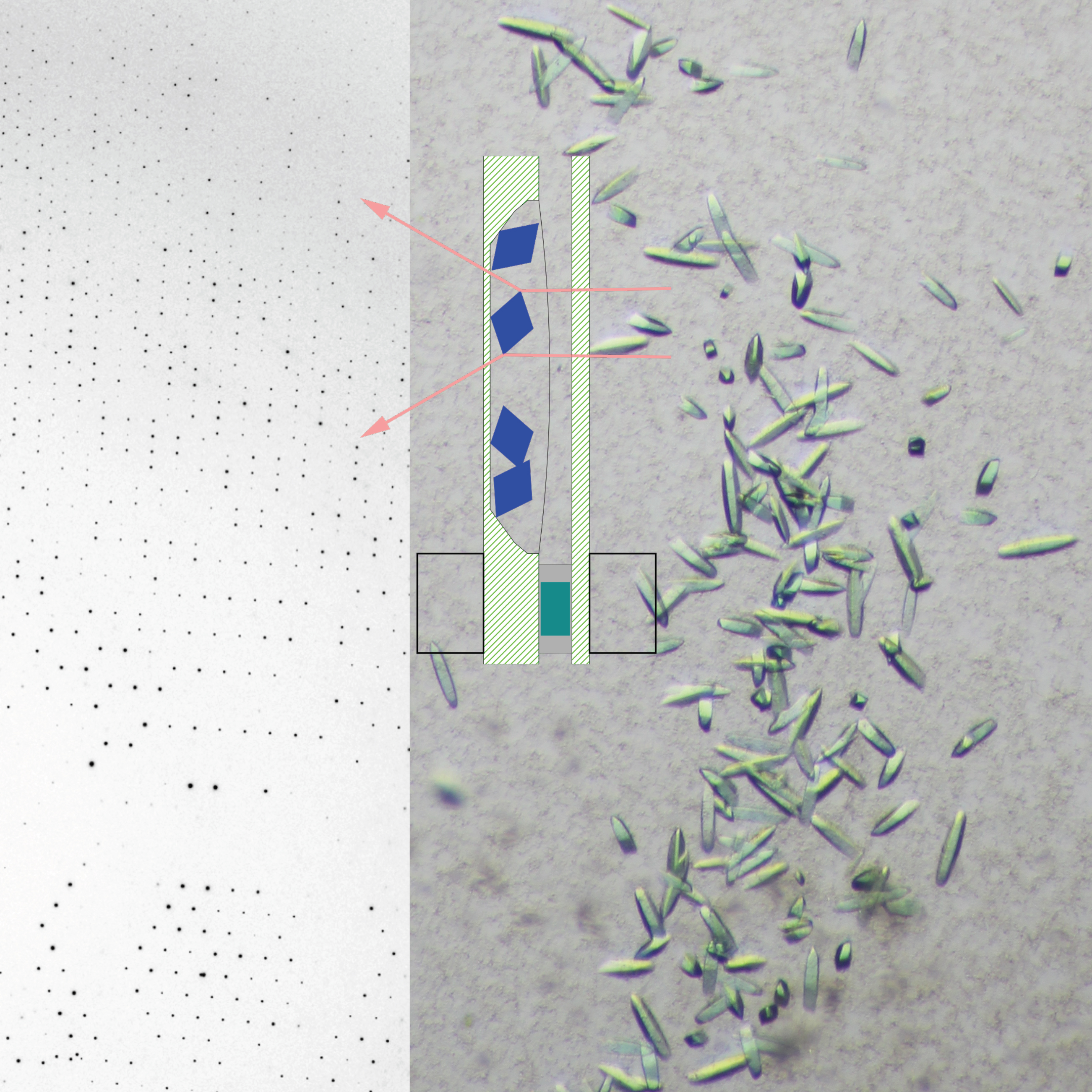 The techniques of macromolecular x-ray crystallography (MX) have revolutionized biology, making possible the study of life down to the level of individual atoms in proteins. But frustrating technical limitations remain, such as the need to cryogenically freeze protein crystals in order to limit damage from the x-ray beam, making it difficult for MX researchers to observe working proteins at room temperature. Serial crystallography techniques that combine data from large batches of crystals at room temperature offer an alternative strategy, but need a large number of protein crystals. Specialized devices to grow crystals and contain them for in situ study have been implemented, but many such devices can introduce background x-ray scattering, thus reducing data quality. A research team from the University of Illinois at Chicago has developed “crystal-on-crystal” chip devices made of a monocrystalline quartz substrate that can be used for large-scale, in situ serial diffraction studies on protein crystals of all sizes at both synchrotron and x-ray free electron laser facilities. They demonstrated the applications of the devices with Laue diffraction experiments on two different types of protein crystals at the U.S. Department of Energy’s Advanced Photon Source (APS). The work was published in the journal Lab on a Chip.

Because most protein crystals tend to be fragile at room temperature, it is important to protect them from damaging changes in sample environment such as pressure, temperature, and humidity. Vibrations or other physical touches can also damage them and thus compromise diffraction data. The crystal-on-crystal device developed by this team will enable the conduct of large-scale and high-throughput diffraction experiments from hundreds and thousands of crystals without the use of injection, screening, or other procedures so that the native crystal states can be preserved as closely as possible.

The experimenters in this study from the University of Illinois at Chicago and Renz Research, Inc., chose monocrystalline quartz as a substrate material for its lack of permeability and thus resistance to vapor loss over a long time, its wide transparency over broad wavelengths, and its minimal x-ray scattering as opposed to other commonly used glass or plastic materials, despite prior concerns that single-crystal materials might create severe interference from their Bragg reflections. The team has tested Z-cut wafers and successfully avoided Bragg reflections altogether from the quartz material (Fig. 1).

Laue diffraction studies were conducted on samples of UVR8, a plant photoreceptor protein, and PhrB, a DNA repair protein, each grown in different devices. Protein crystallization was tested using both the hanging drop vapor diffusion and microbatch methods. Both monochromatic diffraction and polychromatic Laue diffraction studies were performed with the devices mounted on a goniometer at the BioCARS 14-ID-B beamline at the Argonne APS (the APS is an Office of Science user facility). The researchers were able to obtain nearly complete datasets from hundreds of crystals, with a greater number of usable frames compared to previous serial Laue diffraction studies. With further improvements in data processing techniques, they expect to obtain thousands of frames per dataset.

Serial crystallography obtains a dataset not from an individual crystal but rather many thousands, with each crystal often contributing only one frame. The nature of injector-based methods inevitably rules out repeated exposures of an individual crystal. Repeated exposures from the same crystal are also difficult because they can quickly induce x-ray damage at room temperature. However, the experiment team notes that their crystal-on-crystal chip can facilitate second and subsequent x-ray exposures from the same crystal but with different volumes with the use of crystal recognition and shot planning software, improving dynamic imaging capabilities.

The researchers observe that both injection-based and fixed-target sampling systems often display a low “hit rate,” defined as the number of images containing any diffraction signal out of the total attempted hits. Considering an alternative parameter they call “yield,” which is the percentage of total crystals that produce diffraction data, the team notes that the current experiments produced a yield of nearly 100%, indicating that almost all of the prepared crystals were imaged, although not all gave usable data.