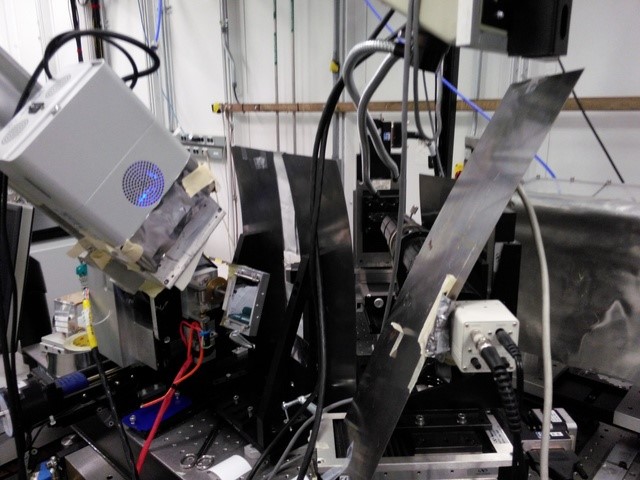 Non-resonant valence-to-core (V2C) x-ray emission spectroscopy (XES) promises to be a powerful complement to other structure characterization methods, in that the emerging technique as applied to 3d transition metals has been found to clearly distinguish ligand atoms that are similar in atomic mass, which other structure determination tools often cannot do. This motivated a team of researchers to begin investigating the use of nonresonant V2C XES with 4d metals, whose V2C Kβ emission spectroscopy has not been extensively investigated. All data were measured using a recently developed optimized/high-resolution spectrometer at the U.S. Department of Energy’s Advanced Photon Source (APS), an Office of Science user facility at Argonne National Laboratory. The spectrometer was specifically designed to operate efficiently in the energy range required for nonresonant V2C XES of the 4d transition metals. The amplitudes and positions of the Kβ2,4 and Kβ′′ V2C XES peaks were identified using software that was developed to process and analyze the data generated by the spectrometer. Density functional theory was combined with calculations of the Bethe-Salpeter equation of motion to interpret the results.

V2C XES measurements involving the metal atoms of a material can complement the more established structural determination techniques by providing a specific sensitivity to the ligands bound to the metal atoms. In an x-ray emission measurement, the incident x-ray beam is used to excite a 1s electron of the metal atom, creating a photoelectron and leaving behind a core hole. When the core hole is refilled by some other electron, a secondary photon is emitted by the atom. The energy of that secondary photon identifies the state of that other electron before it refilled the core hole. The Kβ′′ peak in V2C XES is of particular interest as it arises from the transition of the ligand 2s electron filling the metal 1s core hole. In the case of the 3d transition metal series (Ti to Zn), the position of the Kβ′′ peak shifts many electron volts to lower energy as the ligand changes from carbon to nitrogen, oxygen, or fluorine.

Utilizing the spectrometer at the Materials Research Collaborative Access Team 10-ID-B x-ray beamline at the APS, the research team from the National Institute of Standards and Technology, Argonne National Laboratory, Stony Brook University, Brookhaven National Laboratory, and the University of Sheffield explored the ligand dependence of nonresonant V2C XES for the niobium compounds NbC, NbN, N2O5, and NbF5, showing that the Kβ′′ peaks of this 4d metal demonstrate the well-defined dependence on ligand species that was found for 3d metals and molybdenum, the only other 4d metal studied using the non-resonant V2C XES technique. 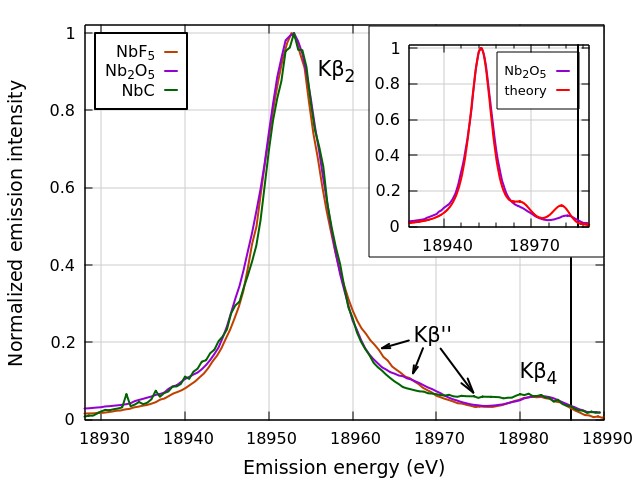 The nonresonant V2C XES Kβ2,4 spectra for the Nb4+ compound NbC and the Nb5+ compounds Nb2O5 and NbF5 were measured with photons having an incident energy of 19100 eV, which is 114 eV above the Nb K-edge energy of 18986 eV (Fig. 2). As with the 3d metals, the position of the Kβ′′ peak was found to be ligand dependent, with shifts by many electron volts among the ligands C, O, and F, which were well within the detection limit of the researcher’s spectrometer.

The study showed that the position and intensity of the Kβ′′ peak can be used to positively identify ligand species, even in situations where x-ray diffraction, x-ray absorption fine structure (XAFS), neutron diffraction, or other structural measurements cannot resolve that information. The nonresonant V2C XES measurement does not contain as much information about the chemical state of the material as measurements made in the resonant regime, with the incident photon energy being close to the core hole excitation energy. It is, however, a relatively simple and quick measurement that can be added to an XAFS or diffraction measurement campaign at a synchrotron.  — Vic Comello

M.T. was supported by Laboratory Directed Research and Development Grant No. 16-039 at Brookhaven National Laboratory. N.C.H. received financial support from the Engineering and Physical Sciences Research Council under Grant No. EP/M026566/1. Materials Research Collaborative Access Team operations are supported by the U.S. Department of Energy (DOE) and Materials Research Collaborative Access Team member institutions. The research used resources of the Center for Functional Nanomaterials, which is a DOE Office of Science Facility at Brookhaven National Laboratory under Contract No. DE-SC0012704. This research used resources of the Advanced Photon Source, a DOE Office of Science User Facility operated for the DOE Office of Science by Argonne National Laboratory under Contract No. DE-AC02-06CH11357.