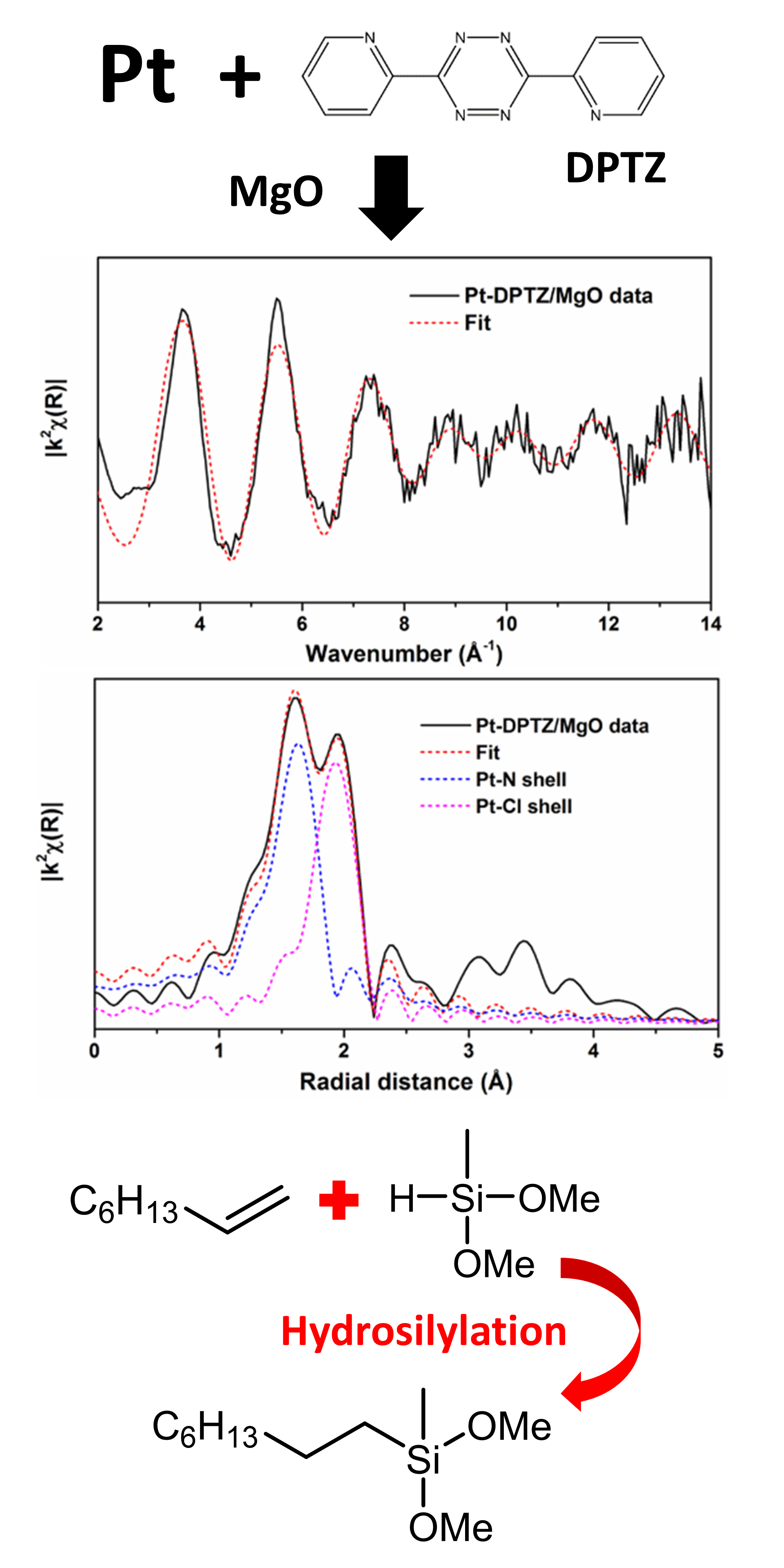 Solid catalysts are utilized in approximately 9 out of 10 processes in the chemical industry to speed up the manufacture of everything from pharmaceuticals to pesticides. Solid catalysts are easily separated from the reaction mixture once the reaction is complete because all the other materials involved are gas or dissolved in solvent. Unfortunately, solid catalysts have a major drawback: They are less selective than soluble catalysts and so the products they make can contain more side products. A new type of solid catalyst based on platinum promises to change all that. Scientists working at the U.S. Department of Energy’s Advanced Photon Source (APS) characterized the new catalysts, which display better selectivity than the commercially available variety.

The separation benefits of heterogeneous catalysts mean lower costs in the final step of extracting product from reaction mixture.

However, their use represents something of a compromise because such catalysts are less selective in the way in which they allow the starting materials to react. They not only speed up the main reaction but also side reactions leading to byproducts and lower percentage yields of the target compound. The lower selectivity of solid catalysts is due to different ways in which the reactive chemical groups are arranged around different types of metal centers in the catalyst. The problem is particularly acute when chemists hope to add useful functional groups to simple hydrocarbon compounds, chemicals containing strings of carbon atoms to which are attached the simplest “group,” hydrogen atoms. Converting simple hydrocarbons into more complicated molecules is often the first step in constructing pharmaceuticals, pesticides, and other important products.

Chemists have spent many years looking for ways to improve heterogeneous catalysts and some progress has been made in improving their selectivity. One promising approach involves the use of single-site catalysts (SSC). These materials have well-defined, uniform metal centers that are atomically dispersed through the surface of supporting materials, so that reactive groups interact with all metal centers in the same way. Also, no metal centers are buried in the body of particles, so they are used more efficiently. Finding relatively straightforward ways to make SSCs and testing them for a range of industrial reactions have been the focus of many investigations. Unfortunately, there is an obvious obstacle in the way of their wider development: the single metal atoms needed in such catalysts are thermodynamically unstable and the active sites can stick together as soon as, or even before any reaction is initiated, effectively self-poisoning the catalyst and rendering it useless.

One approach to circumvent this obstacle involves dispersing the SSCs on another carrier solid, such as an oxide, an inactive metal, or a carbon support. These have been tested with some success. Another approach involves chemically anchoring soluble single-site metal compound to a solid support but this also has stability problems as well as being costly and so commercially untenable. Yet other approaches involve the formation of porous materials, such as metal-organic frameworks (MOFs) where the active metal centers of the SSC is essentially encapsulated in its own support material. This latter option often involves complex multicomponent solution mixtures, ultra-high vacuum and/or vapor deposition preparation procedures that have, so far, limited its practicality in an industrial setting.

Nevertheless, the ability to tune the design of some of the approaches and the high selectivity and chemical activity possible mean that researchers are now striving to overcome the complexity of setting up SSCs and reducing costs to make them a viable alternative to conventional heterogeneous catalysts in the chemical industry.

Critically, finding a way to make metal-ligand single-sites on high surface area catalyst supports without the need for complex preparation conditions is an important target in this area.

It has now been demonstrated that it is possible to impregnate platinum and an organic ligand -  3,6-di-2-pyridyl-1,2,4,5-tetrazine (DPTZ) - in a single-step process to create Pt-DPTZ single-site catalytic centers on powdered magnesium oxide, aluminum oxide, and cerium oxide. The resulting powerful and selective catalysts have been characterized (Fig. 1) using x-ray adsorption spectroscopy measurements at the X-ray Science Division 9-BM-B,C x-ray beamline at the APS, an Office of Science user facility at Argonne National Laboratory. For the magnesium oxide example, 90% of the platinum centers are single-site centers. Tests of their catalytic performance in industrially relevant hydrosilylation reactions were demonstrated, satisfactorily showing better selectivity than commercially available homogeneous catalysts and revealing a new strategy for the development of supported single-site catalysts that can potentially be applied in various metal-ligand systems.   — David Bradley

This work was supported by the U. S. Department of Energy (DOE) Office of Science-Basic Energy Sciences, Chemical Sciences program, DE-SC0016367. This research used resources of the Advanced Photon Source, a U.S. DOE Ofﬁce of Science User Facility operated for the DOE Ofﬁce of Science by Argonne National Laboratory under Contract No. DE-AC02-06CH11357.