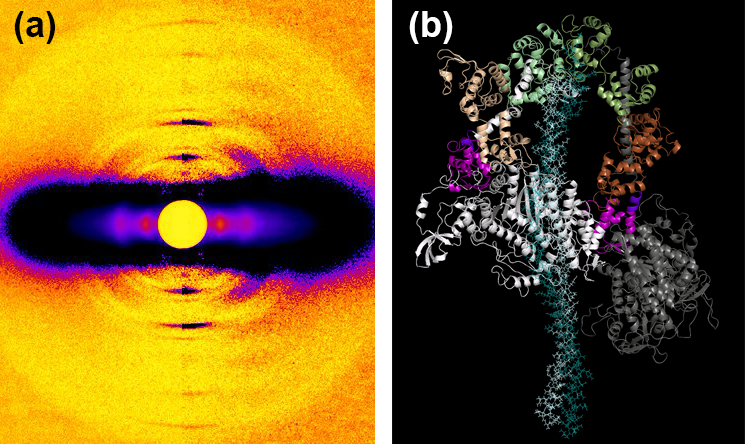 Previous work had hinted that a folded state of the myosin protein, seen both in purified form and in isolated filaments and known as the interacting-heads motif or IHM, could be analogous to the SRX state, although this has not yet been demonstrated experimentally. It has been proposed that mutations causing HCM disrupt this state, resulting in a higher percentage of myosin heads being available for interaction with actin and leading to the hypercontractility of cardiac tissue seen in HCM. These investigators, from  MyoKardia, Inc., the Stanford University School of Medicine, the Illinois Institute of Technology, Exemplar Genetics, the Harvard Medical School, and the University of California, San Francisco, first studied this possibility using three separate purified ß-cardiac myosin constructs (25-heptad heavy meromysin [HMM], two-heptad HMM, and short S1), finding that a fraction of their basal ATPase rates were within the range of 0.002-0.004 s-1 which defines the SRX state.

After confirming the slow basal ATPase rate, the team hypothesized that they were observing a folded structural state biochemically similar to SRX. This was supported by electron microscopy that visualized a folded-back myosin structure. They also demonstrated that mavacamten slowed ATPase rates to SRX levels and promotes the formation of folded-back myosin molecules, suggesting that it acts by stabilizing a SRX state.

The research team also investigated the action of mavacamten in porcine and human cardiac fibers. Both showed similar marked effects, with an increase in SRX and decreased tension. The low-angle x-ray diffraction studies carried out at the Biophysics Collaborative Access Team 18-ID-D beamline at the APS showed a significant increase in ordering of the porcine myosin heads in both relaxed and contracting fibers on the thick filament backbone (Fig. 1). The presence of mavacamten appears to shift the on-off state equilibrium of myosin to an off/folded-back state. (The APS is an Office of Science user facility at Argonne National Laboratory.)

To study one of the best-described ß-cardiac myosin mutations in HCM, R403Q, the researchers used a large-animal model of the Yucatan minipig. This showed a sharp decrease in SRX levels in R403Q cardiac fibers compared to those from wild-type pigs, consistent with the role of this mutation in causing hypercontractility. Treatment with mavacamten restored SRX levels to normal and reduced fiber tension. The XRD images again showed increase in ordering of myosin heads along the thick filament backbone. Further studies of human cardiac fibers with the R663H mutation showed similar results, showing the destabilizing effects of the HCM mutations on the SRX state in both humans and pigs.

The experimenters emphasize that although the present work does not establish an equivalency of the folded-back SRX state with the IHM state, it demonstrates some striking insights, particularly that specific myosin mutations weaken SRX enough to lead to the hypercontractility seen in HCM. The results also confirm the importance of the tail region of myosin for a stable SRX state, although uncertainties persist regarding the exact molecular structures and charge interactions. Further work to better characterize and understand these phenomena promises new insights and therapeutic possibilities for the treatment of hypertrophic cardiomyopathy.

This work was funded by National Institutes of Health (NIH) Grants GM33289 and HL117138 (to J.A.S.), AR062279 (to R.C.), and HL084553 (to J.G.S.). D.V.T. is supported by Stanford Lucile Packard Child Health Research Institute Postdoctoral Award UL1 TR001085 and American Heart Association Postdoctoral Fellowship 17POST33411070. The EM project described was supported, in part, by American Recovery and Reinvestment Act Award 1S10RR026780-01 from the National Center for Research Resources. This project was supported by Grant 9 P41 GM103622 from the National Institute of General Medical Sciences of the NIH (to T.C.I.). This research used the Nikon Imaging Center, University of California, San Francisco and the resources of the Advanced Photon Source, a US Department of Energy (DOE) Office of Science User Facility operated for the DOE Office of Science by Argonne National Laboratory under Contract DE-AC02-06CH11357.