Spin and Charge Frozen by Strain 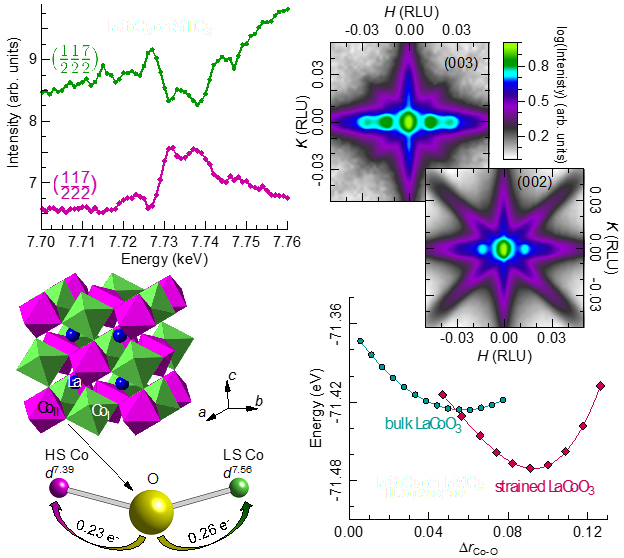 In the development of next-generation microelectronics, a great deal of attention has been given to the use of epitaxy (the deposition of a crystalline overlayer on a crystalline substrate) to tailor the properties of materials to suit particular applications. Correlated electron systems provide an excellent platform for the development of new microelectronic devices due to the presence of multiple competing ground states of similar energy. In some cases, strain can drive these systems between two or more such states, resulting in phase transitions and dramatic changes in the properties of the material. Often, the specific mechanism by which strain accomplishes such a feat is unknown. This was precisely the case in lanthanum cobaltite, LaCoO3, which undergoes a strain-induced transition from paramagnet to ferromagnet, until a recent study carried out at the U.S. Department of Energy’s Advanced Photon Source (APS) revealed the intriguing microscopic phenomena at work in this system. These phenomena may play a role in spin-state and magnetic-phase transitions, regardless of stimulus, in many other correlated systems.

Lanthanum cobaltite is a perovskite, which means the structure can be thought of as made up of distorted cubes with cobalt at the cube centers, oxygen at the cube faces, and lanthanum at the cube corners. The cobalt ions have a nominal 3+ valence, meaning they lose three electrons to the neighboring oxygen ions. Bulk LaCoO3 is paramagnetic (that is, having a net magnetization only in the presence of an externally applied magnetic field) above 110 Kelvin, and non-magnetic below that temperature. In its ground state, all the electrons on a given cobalt ion are paired, meaning their magnetic spins cancel each other out. These are so-called low-spin (LS) Co3+ ions, and when all of the cobalt ions are in this form, LaCoO3 is non-magnetic.

With increasing temperature, electrons are excited to higher energy levels in the material where they can become unpaired, leading to paramagnetism. These are referred to as intermediate spin (IS) and high-spin (HS) cobalt ions, depending on whether one or two electrons have been excited. Specifically, the paramagnetic phase up to 350 Kelvin has been attributed to the presence of an equal mixture of HS and LS cobalt ions, which order into a rock salt, or three-dimensional checkerboard, arrangement. Strikingly, when synthesized as an epitaxial thin film, LaCoO3 becomes ferromagnetic below about 80 Kelvin. When made into films, the structures of materials change to conform to those of the substrates on which they were deposited.

To look carefully at the structural changes in LaCoO3, the research team from Argonne National Laboratory, the University of Illinois at Chicago, the University of California, Riverside, and the National Institute of Standards and Technology began by using an advanced synthesis technique, pulsed laser deposition, to deposit LaCoO3 on strontium titanate. They then used x-ray diffraction at the X-ray Science Division 6-ID-B and 33-BM-C x-ray beamlines at the APS to determine the structure of strained LaCoO3 with a high degree of accuracy. (The APS is an Office of Science user facility at Argonne,) A reduction in symmetry from the bulk rhombohedral structure to monoclinic was found.

“We were very excited to see the symmetry was reduced because in that case multiple cobalt sites, and therefore multiple cobalt spin states, may be present” said the study’s corresponding author, George Sterbinsky. Direct measurement the spin states present in the material is not possible, but the research team speculated that the d-orbital charge would differ between two cobalt sites with different spin states because the slightly different orbital occupations would change the amount of charge transferred to neighboring oxygen atoms. X-rays are highly sensitive to the electron charge on an atom, and by using resonant x-ray diffraction at the APS, which can separately probe the charge on different cobalt sites within the lattice, the research team demonstrated that charge order was in fact present in the material. The charge order was also shown to have a 1:1 order such that every other cobalt ion was different from the cobalt ions closest to it and the same as its next nearest neighbors.

To further understand the charge order, the authors turned to computational calculations, done in part using the high-performance computing cluster Blues at Argonne, one of the clusters that belongs to the Laboratory Computing Resource Center and features ~350 publicly usable compute nodes and over 6,000 cores available for all users, with a theoretical peak performance of 107.8 TFlops. Using density functional theory calculations, the researchers demonstrated that HS and LS cobalt ions with a 1:1 order show both charge order and ferromagnetism as found in LaCoO3 films. Calculations also showed the presence of cobalt-oxygen bond disproportionation between the two cobalt sites.

“Interestingly, this is precisely the spin state order believed to be present in the paramagnetic phase of lanthanum cobaltite, leaving us to wonder why ferromagnetism would not occur in the bulk material,” noted Philip Ryan, one of the study’s authors.

To answer that question and gain further insight into the microscopic mechanism responsible for the observed charge and spin-state order, the authors calculated the stability of the bond disproportionation for bulk and strained LaCoO3. In both cases, the energy of the system is minimized with a finite bond disproportionation, although in the case of strained LaCoO3, this state is lower in energy and minimum occurs for a larger difference in bond lengths. This indicates that the HS-LS cobalt order is more stable in strained LaCoO3. In the case of bulk LaCoO3 the spin state of a given cobalt ion can easily fluctuate because of the low energy barrier. When strain is applied, the spin-state and therefore charge order essentially become frozen, which allows the formation of a spontaneous magnetic moment, i.e. ferromagnetism.

H. Park and R. Nanguneri acknowledge support of start-up funding from the University of Illinois at Chicago and Argonne (by the U.S. Department of Energy (DOE) Office of Science program). We gratefully acknowledge the computing resources provided on Blues, a high-performance computing cluster operated by the Laboratory Computing Resource Center at Argonne. Additional support from the National Institute of Standards and Technology (NIST) is also acknowledged. J. X. Ma and J. Shi are supported by DOE BES Award No. DEFG02-07ER46351.