Mosquitoes Drink with a Burst in Reserve 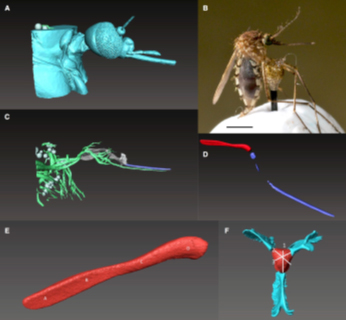 The original Virginia Tech press release by Emily Roediger can be read here.

Mosquitoes may have a reputation for being one of the world’s most intractable pests, but they are actually quite tiny and fragile. So, when an international team of scientists carrying out experiments at the U.S. Department of Energy’s Advanced Photon Source (APS) wanted to observe the underlying mechanisms of how the insects feed, they had to get creative. Their efforts, published in Scientific Reports, not only yielded the discovery of a new mode of drinking in mosquitoes, but they could also answer a fundamental question of insect morphology: Why do some insects that drink liquid have two pumps in their heads, while others have only one? Thanks to the 2016 Zika virus outbreak and a new epidemic of yellow fever currently sweeping through Brazil, mosquitoes and the diseases they carry remain an ongoing focus of public health concern. These new findings on the insect’s feeding mechanisms and modalities could have larger implications for how scientists address mosquito-borne disease transmission in future research.

The researchers, from Tohoku University (Japan), Virginia Tech, Brookhaven National Laboratory, and Toyo University (Japan) trapped wild mosquitoes in the forest edging the APS at Argonne National Laboratory, then essentially starved the insects for 48 hours. After anesthetizing them with nitrogen gas, the team used nail polish to glue a single mosquito to the head of an insect pin, and then submerged its proboscis – that long, straw-like appendage mosquitoes use for drinking – into a sugar-based feeding solution. As the hungry insect sucked up the nectar, synchrotron x-rays from the APS let the team capture video footage of everything that happened behind the pest’s opaque exoskeleton.

Employing their unique, inventive set-up, the researchers captured tomographic x-ray images of mosquito heads at the X-ray Science Division (XSD) 2-BM x-ray beamline at the APS. The raw two-dimensional images were converted to three-dimensional images using tomoPy software at the APS (Fig. 1). They also recorded x-ray videos of drinking mosquitoes at the XSD 32-ID beamline at the APS employing monochromatic x-rays at an energy of 33.2 keV (Fig. 2). (The APS is an Office of Science user facility).

“We found that the two pumps in the mosquito’s head allow for a secondary ‘burst mode’ of feeding,” said Jake Socha, associate professor in the department of biomedical engineering and mechanics at Virginia Tech and a senior author of the study.  “This burst mode involves a single, large-volume intake of fluid, which is something that had never been observed before. It potentially gives an insect with two pumps more options and allows for multi-modal feeding, as well as functional flexibility.”

“Mosquitoes are not just a nuisance, but also a health threat,” said Mark Stremler, a study co-author and professor in the department of biomedical engineering and mechanics at Virginia Tech. “The more we can understand about their robustness and how they survive, the better chance we have of figuring out ways to control them.”

Despite the importance of feeding in mosquitoes, previous research has not fully understood the internal mechanics of the mosquito’s two-pump system. In bouts of normal drinking, these two muscular pumps operate in a pattern of continuous reciprocation with multiple small strokes, like a back-and-forth motion of small sips on a straw.

However, in the newly discovered burst mode, a mosquito takes a single, large-volume stroke – a giant gulp through the straw – during which the two pumps expand massively to what appears to be their maximum volume. This burst mode produces a large, quick influx of fluid, but it’s also far more energetically costly than the normal continuous mode of pumping.

“The burst mode creates this big expansion in volume, producing a flow rate that’s up to 27 times greater than what we see in the continuous pumping mode,” said Socha. “But it takes about 1000 times more energy. So that begs the question, why do mosquitoes even use it at all?”

To explore that question, the researchers developed a mathematical model of the mosquito’s fluid pumping system, which gave them a detailed mechanical understanding of how it works. They found that the burst mode allows mosquitoes to generate a low-pressure vacuum on demand, which the insects could then use to drive an obstruction – like an air bubble or a small particle, for example – up through the proboscis. The temporary boost in volume intake could also be used for faster drinking, perhaps if the mosquito were trying to avoid detection, but that scenario seems less likely because the bursts were only observed sporadically.

“The fluid mechanics model allowed us to postulate new hypotheses about what this burst mode might do instead of just saying that it exists,” said Stremler. “Now we have a parametric description that gives a basis for deliberately testing questions of potential function. Overall, the model helps direct and inform the possibilities of where we go from here with the research.”

In addition to the biomedical implications of mosquito-borne disease transmission, the researchers also envision the possibility of mimicking the mosquito’s two-pump system in a microfluidic device that could be used to deliver targeted drug therapy within the human body.

“For these types of tiny devices, you might never have stumbled upon that functional design unless it’s something you can see in nature,” said Socha. “Evolution is the ultimate tinkerer.”

With a number of hypotheses remaining, avenues for future research look promising.

“As opposed to closing an open question, this study has instead opened the door to a whole new set of questions and possibilities that we didn’t even consider before this burst mode was observed,” said Stremler.

Video S1. Representative video of pumping in the head of the mosquito Aedes vexans during a bout of continuous drinking. The changes in intensity in the food transport system represent the movement of sugar water that has been marked with iodine to facilitate visualization. Note the congruent movement of tracheal tubes adjacent to the pharyngeal pump as it changes APS beamline 32-ID at Argonne National Laboratory using synchrotron x-rays.

Additional videos are located at "Electronic Supplementary Materials" found at the end of the journal arrticle.

Research was partially funded by grants from the National Science Foundation (0938047) and the Institute for Critical Technology and Applied Sciences at Virginia Tech to J.J.S. and M.A.S., and the Japan Society for the Promotion of Science (KAKENHI 25000008 and 16K14150) to K.K. This research used resources of the Advanced Photon Source, a U.S. Department of Energy (DOE) Office of Science User Facility operated for the DOE Office of Science by Argonne National Laboratory under Contract No. DE-AC02-06CH11357.