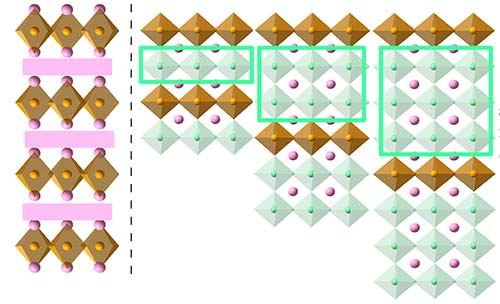 Two-dimensional (2-D) crystalline films often exhibit interesting physical characteristics, such as unusual magnetic or electric properties. By layering together distinct crystalline thin films, a so-called “superlattice” is formed. Due to their close proximity, the distinct layers of a superlattice may significantly affect the properties of other layers. In this research, single 2-D layers of strontium iridium oxide were sandwiched between either one, two, or three layers of strontium titanium oxide to form three distinct superlattices. Researchers then used x-ray scattering at the U.S. Department of Energy’s Advanced Photon Source (APS) to probe the magnetic structure of each superlattice. The x-ray data revealed that the number of layers of the titanium-based material produced a dramatic difference in the magnetic behavior of the iridium-based layer. These findings are especially significant because the iridium compound is one of the perovskites, a class of materials known for their unique electric, magnetic, optical, and other properties that have proven useful in sensor and energy-related devices, and which are being intensively investigated for their application towards improved electronics and other technologies.

The original perovskite mineral, CaTiO3, was discovered in the mid-1800s. Many similar compounds have been found over the years, featuring two metal elements combined with oxygen in the chemical ratio ABO3 (where A and B are the metals). The experimental research described here involved artificially-grown stacks, or superlattices, of SrIrO3 and SrTiO3, both of which have a perovskite-like structure. Figure 1b depicts the alternating layers that make up the superlattice. The artificially-grown SrIrO3/SrTiO3 superlattice used for this research is similar to the widely-studied bulk Sr2IrO4 and Perovskite ABO3 crystals that can form a similar superlattice. However, unlike the better-known Sr2IrO4 system, the magnetic interactions of the SrIrO3/SrTiO3 superlattice are highly tunable.

Researchers have previously used the well-known Sr2IrO4 crystalline system to investigate Mott insulating behavior and antiferromagnetism. The Sr2IrO4 system can naturally grow into an alternating SrIrO3/SrO/SrIrO3/SrO/... layering scheme (Fig. 1a). In the superlattice derived from Sr2IrO4 crystals, the SrIrO3 layers are antiferromagnetic and Mott-insulating perovskites, while the SrO layers are relatively inert. Interestingly, the superlattice's Mott insulating behavior and antiferromagnetism are believed to be affected by both intralayer (within the layer) and interlayer (between layers) exchanges.

Unfortunately, the SrIrO3/SrO crystal system poses certain limitations. For instance, the thicknesses of its layers cannot be readily adjusted. For this study, the researchers from the University of Tennessee, Knoxville, Brookhaven National Laboratory, Charles University (Czech Republic), Academy of Sciences of the Czech Republic, Argonne National Laboratory, and Dublin City University (Ireland) instead used the recently-developed superlattice in which the inert SrO layers are replaced with layers of the similarly-inert titanium compound SrTiO3. Using a laser deposition technique, superlattices composed of atomically thin layers of SrIrO3/SrTiO3 were created.

The superlattices were made with 1, 2, or 3 SrTiO3 layers between each SrIrO3 layer, as shown in Fig. 1b. Each superlattice was probed to compare the effects of their different layering arrangements. Magnetic ordering was determined using x-ray scattering techniques specifically designed to detect magnetic structure, carried out at X-ray Science Division x-ray beamlines 4-ID-D and 6-ID-B at the APS, which is an Office of Science user facility at Argonne. The x-ray data revealed that the highest magnetic ordering, attributed to greater interlayer exchange coupling, occurred in the SrIrO3 layers separated by just a single SrTiO3 inert layer. On the other hand, greater intralayer electron correlation occurred (i.e., correlation of electrons within each SrIrO3 layer) in superlattices with two or three inert SrTiO3 layers.

This study demonstrated that superlattices can be created with precisely-tuned layer thicknesses and sequences of perovskite SrIrO3 and inert SrTiO3. In turn, this capability allows researchers to tailor electron correlations within and/or between the perovskite SrIrO3 layers. Quite interestingly, the researchers also found that the sign (i.e., direction) of the magnetic coupling between the neighboring SrIrO3 layers could be controlled by adjusting the number of buffering SrTiO3 layers.  — Philip Koth

The authors acknowledge experimental assistance from H.D. Zhou, C. Rouleau, Z. Gai, J.K. Keum, and H. Suriya. J.L. acknowledges support from the Science Alliance Joint Directed Research & Development Program and the Transdisciplinary Academy Program at the University of Tennessee. J. L. also acknowledges support by the DOD-DARPA under Grant No. HR0011-16-1-0005. M.P.M.D. is supported by the U.S. Department of Energy (DOE) Office of Science-Basic Energy Sciences Early Career Award Program under Award No. 1047478. Work at Brookhaven National Laboratory was supported by the U.S. DOE Office of Science-Basic Energy Sciences, under Contract No. DESC00112704. D. K. and L. H. acknowledge support from the ERDF (Project No. CZ.02.1.01/0.0/0.0/15_003/ 0000485) and the Grant Agency of the Czech Republic Grant No. (14-37427G). A portion of the fabrication and characterization was conducted at the Center for Nanophase Materials Sciences, which is a DOE Office of Science user facility. This research used resources of the Advanced Photon Source, a U.S. DOE Oﬃce of Science User Facility operated for the DOE Oﬃce of Science by Argonne National Laboratory under Contract No. DE-AC02-06CH11357.