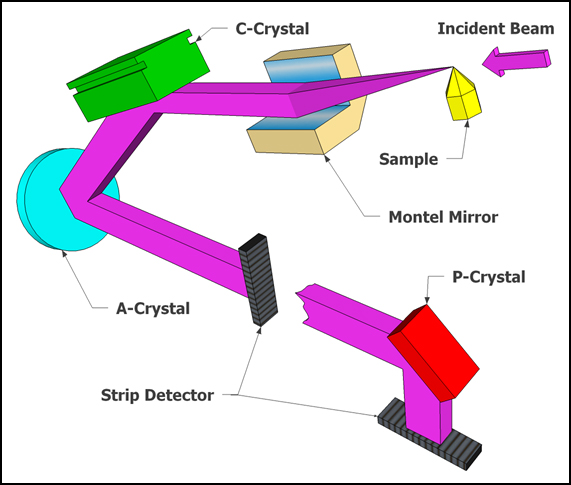 Resonant inelastic x-ray scattering (RIXS) is a powerful technique for studying electronic excitations in a wide variety of new and complex materials, offering momentum- and energy-resolution and potentially even analysis of scattered polarization. Since its inception in the 1990s, the development of RIXS instrumentation and scientific subjects have benefited from a closely intertwined evolution; improvements in energy resolution and throughput, spurred by specific scientific cases, have in turn made new subjects of study feasible. In the continued quest for substantially improved energy resolution, a novel prototype RIXS flat-crystal spectrometer was recently tested at X-ray Science Division beamline 27-ID-B at the U.S. Department of Energy’s Advanced Photon Source (APS). The spectrometer established a new record resolution for RIXS below 10 meV, together with a promise to do even better soon.

Early RIXS work was aimed at the study of charge transfer excitations in transition metal oxides (TMO), including the high-Tc superconducting cuprates, where electronic excitations could be observed at a few eV. As the understanding of strongly correlated electron systems progressed, orbital degrees of freedom came into focus: in many Mott insulators, transitions between the active d-orbitals, the "dd excitations," were hot topics and could reliably be observed with the then state-of-the-art resolution of 100-200 meV. Magnetism and magnetic ordering are central questions in the study of correlated electron systems. For example, the layered perovskite Iridates showing strikingly similar magnetic exchange interactions as the cuprates, implying that unconventional superconductivity might be found here, to the intriguing assertion that magnetic properties of honeycomb iridates might point to a quantum spin liquid as ground state of this material, the spectrum of novel, exotic properties uncovered or anticipated promise a treasure trove of scientific discoveries. In the late 2000s, RIXS was established as a probe of magnetic excitations. However, spectral features associated with magnetic excitations (“magnons”) lie at a fraction of an eV or even in the sub-10-meV regime. A significant advance in energy resolution is needed to attack such subjects with RIXS.

The new spectrometer at APS beamline 27-ID-B (Fig. 1) uses a multi-layer-based collimating mirror and successive flat-crystal optics. With flat crystals one can largely avoid figure errors and strain, which often are the limiting factor for traditional curved crystal spectrometers. Furthermore, the additional variable of crystal asymmetry allows tailoring the angular acceptance and degree of beam collimation of a flat crystal, and ultimately the resolution and efficiency of the assembly. Lastly, but very importantly, flat crystal assemblies provide the opportunity to include polarization analysis of the scattered beam efficiently and without loss of energy resolution.

While polarization is necessary to attain a complete picture of the physics in an inelastic scattering event, routine polarization measurements have not been accomplished thus far in any RIXS measurement with better than a few hundred meV of resolution. The problem with flat crystals, however, is their minuscule solid angle x-ray acceptance. With the advent of advanced multilayer mirrors, collimators can now be devised that offer an acceptance comparable to curved analyzers, while collimating to a degree palatable for flat crystals.

The prototype spectrometer tested at beamline 27-ID was designed for measurements at the Ir L3 absorption edge (11.215 keV). Scattered x-rays emanating from the sample are collected by a parabolic Ru/C Montel mirror. The pre-collimated exit beam is further collimated by the highly asymmetric Si(111) C-crystal. A near-backscattering Quartz(309) A-crystal followed by a position-sensitive detector performs the high-resolution spectral analysis. For polarization analysis, a Si(444) P-crystal with a Bragg angle of close to 45º is inserted in the setup as necessary. 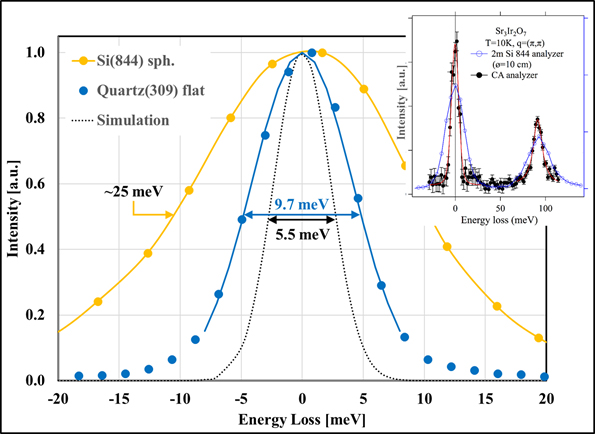 Elastic lines recorded from Scotch tape are shown in Fig. 2. Here the yellow trace is characteristic for a state-of-the-art curved-crystal spectrometer using a Si(844) spherical analyzer, while the blue trace was measured on the new flat-crystal ("CA-analyzer") instrument, showing an improvement by a factor of 2.5 over the curved analyzer. The dashed trace is a simulation for the new instrument in combination with a matching monochromator. In the inset, a magnon spectrum from SR3Ir2O7 is shown, measured by the same two instruments. Dramatic sharpening of features and new spectral structures are clearly visible in the spectrum with higher resolution, measured by the CA-analyzer instrument.

The flat crystal spectrometer design can easily be expanded for other absorption edge energies of scientific interest, by choosing an appropriate combination of crystals and multilayer mirror.