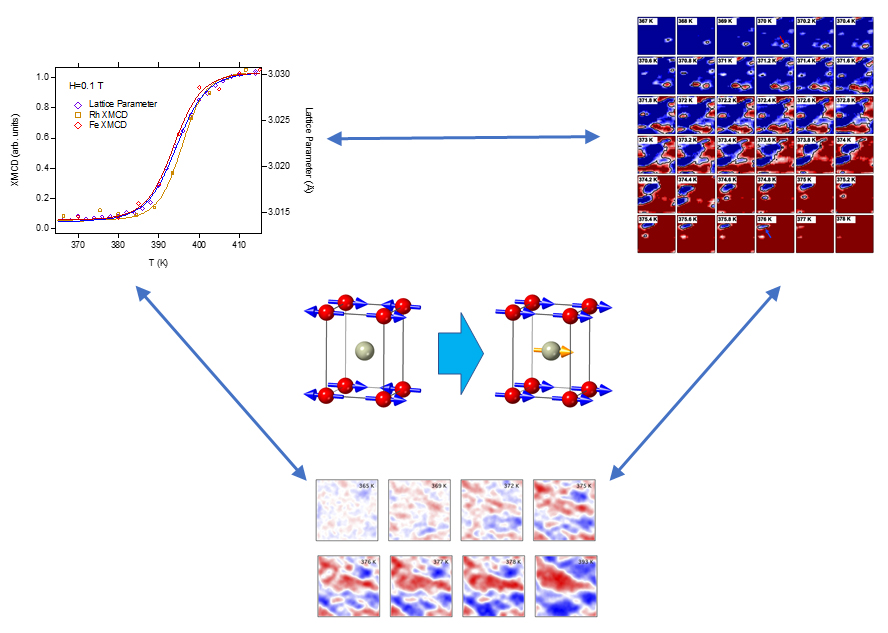 A team of researchers used a combination of high-resolution structural imaging, magnetic domain imaging, and dichroic spectroscopy on three separate x-ray beamlines at the U.S. Department of Energy’s Advanced Photon Source (APS) to shed light on coupled structural and magnetic phase transitions. Through this combination of three individually powerful x-ray techniques, the team was able to provide added insights into the phase transition process and the nature of the coupling between the magnetic and structural order. The results were published in Scientific Reports.

As information storage applications demand higher and higher bit densities, conventional magnetic storage media and memory devices become plagued by superparamagnetic behavior, which causes magnetic bits to flop about as they become smaller, resulting in a loss of the data stored in the bits. In order to keep pushing bit densities higher, a way must be found to stabilize, or pin, these bits when they are quiescent, but still allow them to be written easily.

One promising way around this problem is heat-assisted magnetic recording, in which ferromagnetic bits are coupled to an underlying antiferromagnetic layer to provide a preferred magnetic orientation, or pinning effect. Then, the structure is heated using a fast laser pulse to allow the magnetic orientation to be reset. However, the utility of this heat assisted magnetic storage approach depends on there being a fast and reliably controllable phase transition that can act as a switch for the pinning effect, and a complete understanding of how the pinning material proceeds from one phase to another.

The 50/50 alloy FeRh is an excellent candidate for use as the pinning layer in this type of memory device, since it has a phase transition from its normal antiferromagnetic state to a higher temperature ferromagnetic state at about 375 K. This magnetic transition is also coupled with a structural transition in which the lattice parameter changes by approximately 1%. The nearness of this transition to room temperature, as well as the fact that the transition temperature can be tuned by application of a magnetic field, makes FeRh very attractive for use in heat assisted recording. This material also offers a unique window into how the structure and magnetism can be intertwined in phase transitions, with implications for other types of coupled phenomena.

First, the team from Argonne National Laboratory, the University of California, San Diego, and the University of South Florida used the Hard X-ray Nanoprobe at the X-ray Science Division (XSD)/Center for Nanoscale Materials 26-ID-C beamline at the APS to map the lattice parameter of crystallizing films of FeRh with 30-nm spatial resolution as the films were heated and cooled through the transition. They found that the higher-temperature ferromagnetic phase appears in tiny islands whose growth is then inhibited by the surrounding antiferromagnetic phase, a phenomenon known as kinetic arrest. In fact, they found that the island size follows a 2nd-order-like behavior instead of the 1st order that was expected. (Both the APS and the Center for Nanoscale Materials are Office of Science user facilities at Argonne.)

Using x-ray photoemission electron microscopy (X-PEEM) at XSD beamline 4-ID-C, the researchers showed that the magnetic domain development followed that of the structure, with a similar island nucleation and growth behavior.

Finally, using x-ray magnetic circular dichroism spectroscopy and diffraction with common thermometry at XSD beamline 4-ID-D, the researchers examined how the magnetic moments in the Fe and Rh atoms develop along with the structure. They found that the magnetic and structural transitions are almost coincident in temperature.

The information from these three powerful techniques combines to give a greater insight into the phase transition process, which is crucial for understanding how to use the transition in storage applications. The team showed that the transition is dominated by defect-driven nucleation and kinetic arrest. These results will help in the development of high density data storage devices using FeRh alloy and similar materials with coupled phase transitions. — David Keavney