Acid and Iron Make the Most Sugar 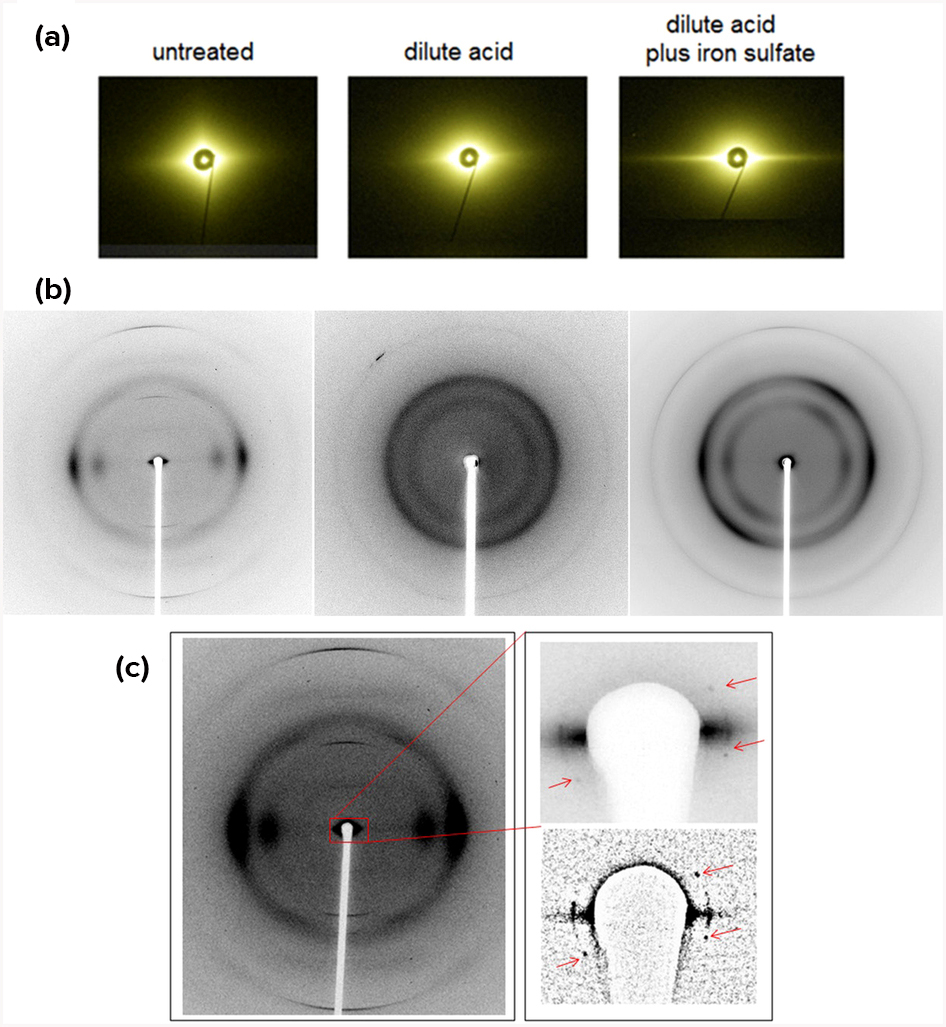 The sugar from corn kernels can be used to make ethanol, an alternative to fossil fuels that can help reduce greenhouse gas emissions. However, since corn kernels are a major source of food for humans and livestock, many efforts are turning to the evaluation of corn stover — the stalk and leaves left over after the sweet ears have been removed — for its viability as a source of ethanol.

Experiments at two U.S. Department of Energy Office of Science x-ray light source user facilities, including the Advanced Photon Source at Argonne National Laboratory, provided some answers when researchers characterized corn stover after it was chemically treated in preparation for ethanol production. This treatment is intended to fragment cellulose fibrils —polysaccharide chains in corn stover cells which bond together — into individual chains from which glucose molecules can be obtained. The efficacy of these treatments determines the amount of glucose available for conversion to ethanol. These new results show that treatments that break fibrils into fragments yield higher amounts of sugar, and are preferable to those that only remove non-sugar molecules from the fibrils' surfaces to make the glucose molecules more accessible.

The sugar in corn stover comes from its cellulose, the main structural component forming plant cell walls. Cellulose is a long, linear chain of glucose molecules. Each polysaccharide chain bonds side-to-side with other chains into stiff, stable columns (fibrils). These connected chains form a crystalline lattice that breaks only when the strong hydrogen bonds — which hold the chains together as a fibril — are broken. Fibrils are further grouped into the columns that make up the plant's cell wall, with the orientation of the fibrils parallel to the column they comprise.

The process of producing ethanol begins by treating plant cell walls to weaken the hydrogen bonds between their polysaccharide chains in order to partially free individual glucose molecules. The treatment options include hot water, dilute sulfuric acid, and iron sulfate, both separately and in different combinations. The second step is hydrolysis: breaking the hydrogen bonds between chains. After pretreatment and hydrolysis, the glucose molecules are fermented to produce ethanol and carbon dioxide, which are distilled to separate out the ethanol.

To determine how the cellulose is affected by the pretreatments, the research team from Northeastern University, Brookhaven National Laboratory, Argonne National Laboratory, and Rensselaer Polytechnic Institute began by milling, drying, and steam-exploding the corn stover. They pretreated the corn stover, then measured the saccharine yield of each pretreated sample.  The dilute acid with iron pretreatment produced the most sugar, the acid-only treatment the second highest amount, and the hot water-only treatment the lowest amount.

Next, the team characterized the pretreated samples to determine the amount of cellulose degradation that resulted from each pretreatment. The figure shows the extent to which two pretreatments permeated the samples; the iron sulfate remains in the plant cell wall while the dilute acid spreads through the entire cell. Ultra-small angle x-ray scattering (USAXS) at beamline X9 of the U.S. Department of Energy’s National Synchrotron Light Source and scanning electron microscope data showed that none of the pretreatments affected the size of the cellulose fibrils but did change their texture and their orientation with respect to that of their wall column. The dilute acid changed the orientations of the fibrils so they no longer ran parallel to the column. Using wide-angle x-ray scattering (WAXS) at the National Institute of General Medical Sciences and National Cancer Institute (GM/CA-XSD) 23-ID-B x-ray beamline at the Advanced Photon Source, the team discovered that the dilute acid pretreatment partially broke down fibrils into groups of cellulose chains. The dilute acid with iron pretreatment degraded the cellulose further: it removed a sufficient amount of non-cellulose molecules to allow the remaining fibrils to coil around themselves, no longer orienting parallel to their column, and broke some fibrils into fragments.