Confirming an Exotic Ground State in a Lacunar Spinel 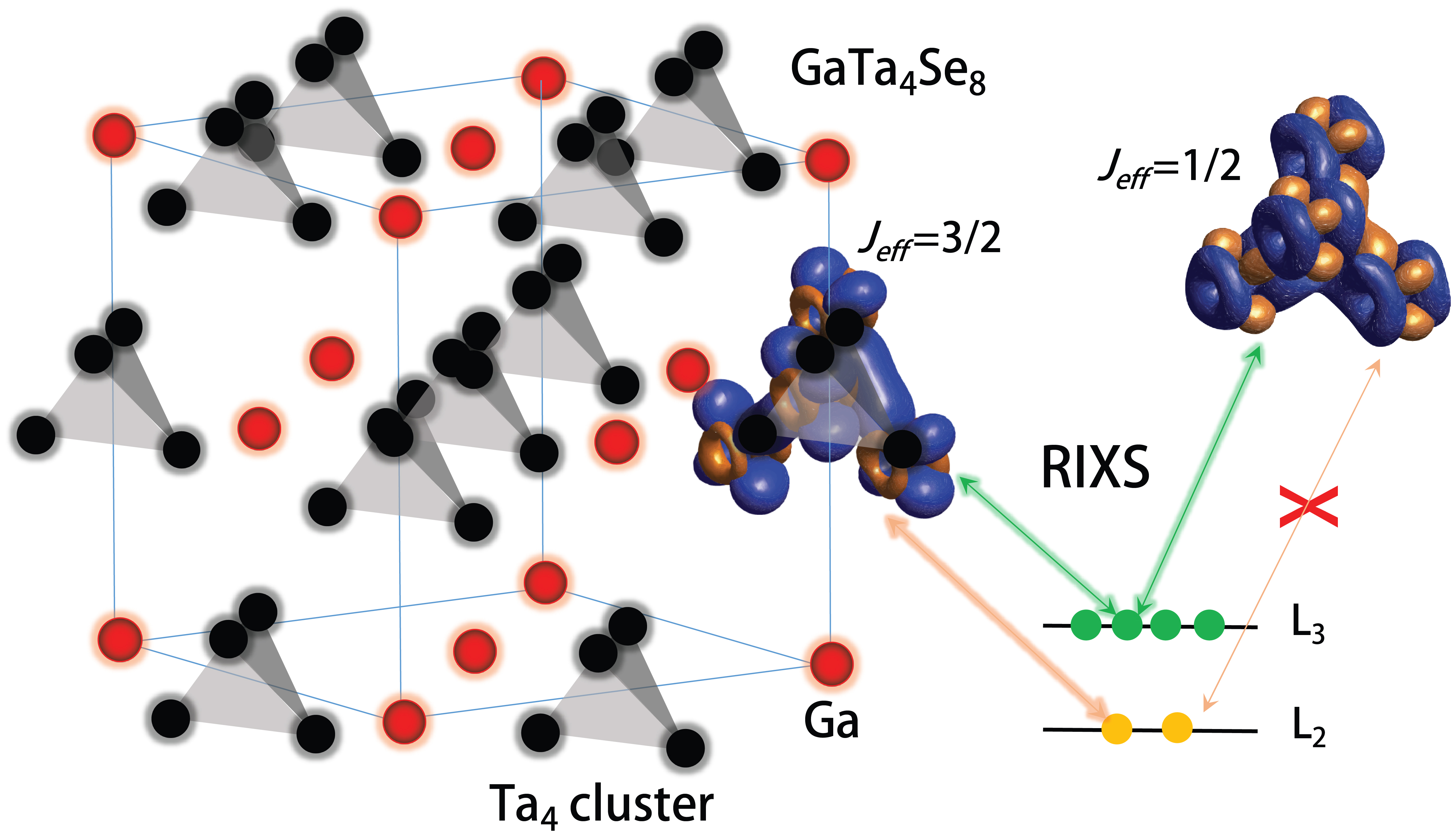 The phenomenon of spin-orbit coupling (SOC) in certain degenerate molecular systems can lead to unusual quantum phases, topological Mott states, and other interesting phenomena, some of which may even be important for spintronics and related applications.  One such state arising from spin-orbit coupling is the molecular Jeff=3/2 ground state, which has been predicted by theory and modeling to be particularly exotic.  A group of researchers working at the U.S. Department of Energy’s Advanced Photon Source (APS) has achieved the first experimental verification of this state in the lacunar spinel GaTa4Se8 through resonant inelastic x-ray scattering (RIXS).  Their work was published in Nature Communications.

In 5d transition-metal systems, the Jeff=3/2 ground state exists near the Fermi energy, governing many-body behavior.  Various materials have been proposed as candidates and studied with magnetic resonant x-ray scattering (MRXS), but this technique cannot be used for non-magnetically-ordered structures.  Among non-magnetic systems, the lacunar spinel GaTa4Se8 is a 5d transition-metal compound that has been proposed as an especially good possibility for the Jeff=3/2 ground state.  Its Ta4Se4 tetramerized crystal structure is split by spin-orbit coupling into a Kramers doublet of Jeff=1/2 and quartet of Jeff=3/2 molecular orbital (MO) states.  To confirm this, the experimenters from KAIST (South Korea), Chung-Ang University (South Korea), the Computational Condensed Matter Physics Laboratory (Japan), the Interdisciplinary Theoretical Science (iTHES) Research Group (Japan), Argonne National Laboratory, Université de Nantes (France), the RIKEN Center for Emergent Matter Science (Japan), and the RIKEN Advanced Institute for Computational Science (Japan) performed high-resolution RIXS at the Ta L2 and L3 edges using the RIXS spectrometer at the 27-ID-B beamline of the APS, along with x-ray absorption spectroscopy (XAS).

The excitation spectra from both the RIXS and XAS studies show the structure of the unoccupied states and a wide energy range density of states, with many unoccupied states above the 2 eV level with both t2g and eg symmetry (Fig. 1).  Near the Fermi energy, however (±2 eV), t2g symmetry is dominant.  Three narrow peaks are seen with RIXS at the L3 edge at 0.27, 0.7 and 1.3 eV, yet the 1.3 eV peak is not present at the L2 edge.  Based on their analyses of momentum transfer measurements and band structure and cluster model calculations, the experimenters attribute this to destructive interference of the Jeff=1/2 state at the L2 edge.

Examining band structure near the Fermi energy, the researchers observe that without a large degree of spin-orbit coupling, only strong electron correlation can split the t2molecular orbital band into a narrow lower band and broad upper band, which would result in no differences between the spectra of the L2 and L3 edges.  In this lacunar spinel, however, there is clear separation between the Jeff=3/2 and Jeff=1/2 molecular orbitals, leaving out the Jeff=3/2 MO band near the Fermi energy in which a moderate U opens a gap, making it a molecular Jeff=3/2  Mott insulator.  The absence of the 1.3 eV peak at the Ta L2 edge on RIXS is due to destructive interference which thus confirms a Jeff=3/2 ground state.  In addition, the research team suggests that the phase transition from Mott insulator to superconductor displayed by GaTa4Se8 under high pressure may result from a frustrated magnetic phase emerging from the non-trivial interactions among relativistic Jeff=3/2 moments.

This first experimental verification of the Jeff=3/2 ground state with RIXS demonstrates the utility of this particular technique even in the many systems without long-range magnetic order, and can serve as a general solution for establishing Jeff states.  Such studies require only moderate energy resolution of around 100 meV, easily achievable in all 5d transition-metal l edges with current instruments.

As a next step, the team plans to investigate other likely candidates for the Jeff=3/2 ground state using RIXS measurements.  The work promises to reveal fresh insights into exotic new quantum phases in materials that may eventually find application in future generations of microelectronic, superconducting, and spintronic technologies.  — Mark Wolverton