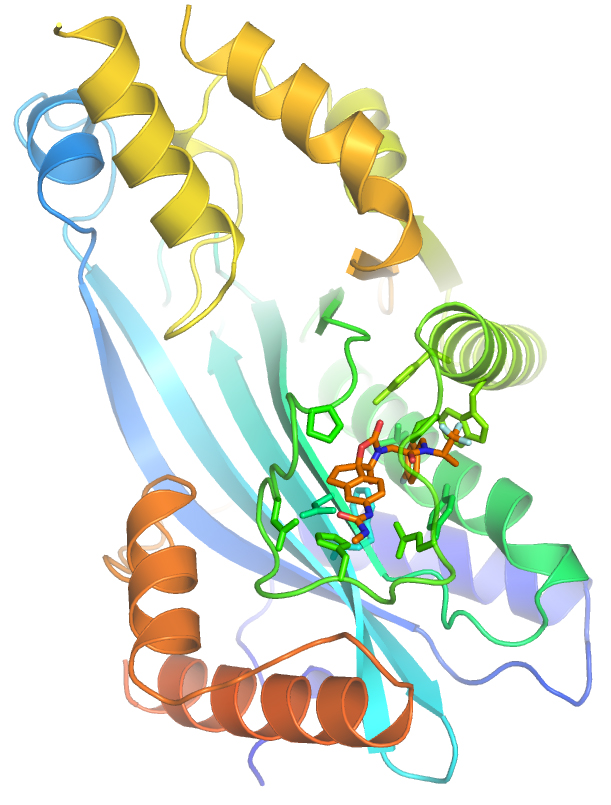 The human genome contains about 19,000 genes that are organized and tightly condensed within our cells by histone proteins that wrap up the chromosomes and make genes available when needed. This process is regulated by the addition and removal of epigenetic “tags” on these histone proteins that can make a gene more available for transcription or can silence it. If this process goes awry, disease can occur. For example, dysregulation of one of these epigenetic tags, acetylation, has been shown to be important for the development and progression of cancer. This process is reversible and regulated by enzymes that put the acetyl group on and take it back off again, histone acetyltransferases and histone deacetylases, or HATs and HDACs. This makes them an attractive target for therapy. In fact, HDAC inhibitors have already made it to the clinic and are being used to treat epilepsy, depression, and some cancers. HAT inhibitors have been more difficult to develop but a recent collaboration between pharmaceutical researchers has made an important first step toward bringing them to the clinic.

This major drug discovery effort involved a team of researchers from both AbbVie, Inc. and Acylin Therapeutics. The first task for the team was identifying possible candidates that might inhibit members of the p300/CBP family of HAT enzymes that they wanted to target. They started with in silico modeling by docking 800,000 potential inhibitor molecules to p300 and then moved to the lab to test 1,300 of them that were commercially available. This led to two positive hits and one of these was optimized to improve its activity and stability, and to reduce the impact of unwanted sites that might be metabolically active and could potentially lead to reduced in vivo exposure. The resulting compound, called A-485, is 1000 times more potent than previously identified p300 inhibitors and has a slow off rate from the enzyme, suggesting it could be an effective HAT inhibitor. It is also quite specific for p300/CBP and does not inhibit other HAT subfamilies, a good sign that the therapy would not have off-target effects.

The next step was to determine how A-485 binds to p300. The team crystallized the catalytically active domain of p300 in a co-crystal with A-485 and determined the structure at a resolution of 1.95Å using data collected at the APS IMCA-CAT beamline 17-ID-B (Fig. 1). They were able to confirm how the inhibitor works by comparing this structure to the structures of p300 bound to its substrates. This showed that A-485 blocks acetyl-coenzyme A binding but not the binding of the peptide substrate. Comparison to other HAT family members also showed why A-485 is specific for the p300/CBP subfamily, the loop that binds A-485 is absent in other HAT subfamilies so they would not be predicted to bind to A-485 very well.

The identification of A-485 as a strong and specific inhibitor of p300/CBP was followed by experiments to determine whether it works the same way in cells. The first test was to see if it could inhibit p300/CBP activity in cells in culture. The team showed that A-485 inhibited histone acetylation by p300/CBP but did not inhibit other HATs in prostate cancer cells, confirming the selectivity of A-485. Further testing in 124 additional cancer cell lines showed that A-485 was effective in blocking the growth of many hematological malignancies and androgen receptor-positive prostate cancer cells but was not as effective at blocking the proliferation of melanoma, breast cancer, or lung cancer cells.

Interestingly, although A-485 blocked HAT activity in androgen receptor-negative prostate cancer cells, it was not sufficient to block the growth of those cells. This suggested to the team that HAT inhibition is not generally anti-proliferative but must be applied in cases where HAT dysregulation is a driver of the cancer. This finding was supported by experiments in androgen receptor-positive prostate cancer cells in which A-485 was able to inhibit the transcriptional activity of the androgen receptor and expression of the MYC oncogene, both important drivers of prostate cancer progression. These results led the team to test A-485 in a mouse model of castration-resistant prostate cancer. Mice who were given A-485 had a 54% inhibition of tumor growth, reduced MYC activity, and reduced androgen receptor transcriptional activity, confirming the results from cultured cells. The researchers concluded from these results that A-485 is a potent, selective inhibitor of HAT and that there is likely to be a benefit from future evaluation of the clinical utility of HAT inhibitors in multiple human diseases.  — Sandy Field