A Step Toward Better “Beyond Lithium” Batteries 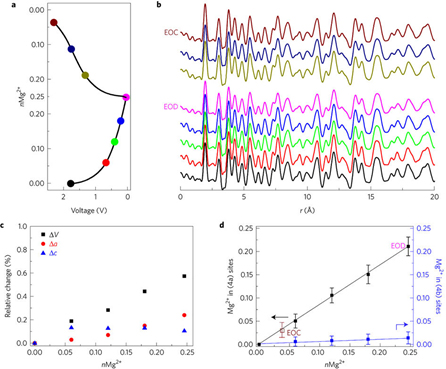 The original Bath University article by Chris Melvin can be read here.

A step toward new, "beyond lithium" rechargeable batteries with superior performance has been made by a multi-institution, international collaboration of scientists who used a variety of research techniques and facilities including the U.S. Department of Energy’s Advanced Photon Source (APS) at Argonne National Laboratory. The research was published in the journal Nature Materials.

We increasingly rely on rechargeable batteries for a host of essential uses; from mobile phones and electric cars to electrical grid storage. At present this demand is taken up by lithium-ion batteries. As we continue to transition from fossil fuels to low emission energy sources, new battery technologies will be needed for new applications and more efficient energy storage.

One approach to develop batteries that store more energy is to use “multivalent” metals instead of lithium. In lithium-ion batteries, charging and discharging transfers lithium ions inside the battery. For every lithium ion transferred one electron is also transferred, producing electric current. In multivalent batteries, lithium would be replaced by a different metal that transfers more than one electron per ion. For batteries of equal size, this would give multivalent batteries better energy storage capacity and performance.

The team also describes a new chemical strategy for designing materials that can be used in future multivalent batteries. Dr. Jiwei Ma, from the Laboratoire PHENIX at Sorbonne Université and a co-corresponding author of the study, claimed: “This new class of cation-deficient TiO2 shows a reversible and fast Mg and Al storage compared to the stoichiometric TiO2, demonstrating that the use of the defect chemistry can drastically tune the material properties for multivalent-ion batteries.“

Dr. Benjamin Morgan, from the Department of Chemistry at the University of Bath and a co-author of the study, said: “Multivalent batteries are a really exciting direction for battery technology, potentially offering higher charge densities and better performance. New battery technologies are going to be more and more important as we wean ourselves off fossil fuels and adopt greener energy sources.

“There are quite a few technical hurdles to overcome, including finding materials that are good electrodes for multivalent ions. We've shown a way to modify titanium dioxide to turn it into a multivalent electrode.

“In the long term, this proof of concept is a possible step towards ‘beyond lithium’ batteries with superior performance.”

The research leading to these results has received funding from the French National Research Agency under Idex@Sorbonne University for the Future Investments programme (No. ANR-11-IDEX-0004-02) and from the German Federal Ministry of Education and Research through funding by the “Sino German TU9 network for electromobility” under the grant reference number 16N11929. B.J.M. acknowledges support from the Royal Society (UF130329). This work made use of the ARCHER UK National Supercomputing Service (http://www.archer.ac.uk), via the membership of the UK's HPC Materials Chemistry Consortium, which is funded by EPSRC (EP/L000202). This research used resources of the Advanced Photon Source, a U.S. DOE Office of Science User Facility operated for the DOE Office of Science by Argonne National Laboratory under Contract No. DE-AC02- 06CH11357.